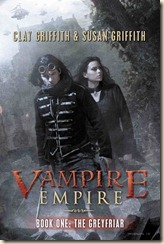 A bleak, steampunk future; an endless struggle between humans and vampires threatening to erupt in all-out war

Princess Adele is heir to the Empire of Equatoria, a remnant of the old tropical British Empire. She is quick with her wit as well as with a sword or gun. She is eager for an adventure before she settles into a life of duty and political marriage to a man she does not know. But her quest turns black when she becomes the target of a merciless vampire clan. Her only protector is the Greyfriar, a mysterious hero who fights the vampires from deep within their territory. Their dangerous relationship plays out against an approaching war to the death between humankind and the vampire clans .

The Greyfriar is the first book in the Vampire Earth trilogy of steampunk-horror adventure and alternate history. I had seen an almost endless stream of positive reviews, so I decided to see what all the fuss was about. Thankfully, I was pleasantly surprised to find that the hype was not entirely misplaced (indeed, I only have one complaint), and this novel was an enjoyable start to a promising new series. Lots of action, stylishly steampunk, grand politics, an interesting and original take on vampire mythology, and a strong human element all combine to make The Greyfriar a solid and fun read.

This is the first steampunk novel I’ve read, and I feel that The Greyfriar in many ways only has one foot in this genre, while the other toys with both horror and adventure fiction. It’s an excellent mix, and the detailed world the authors have created offers a lot of intriguing possibility for future adventures.

The story throws you very quickly into action, when vampires ambush a royal junket convoy that strayed a little too far north, and abduct Princess Adele, who is dragged off to the desolate remnants of London (an environment that is very-well realised on the page). As necessary rescue missions are set in motion, events quickly spiral out of hand, and leave many characters at the mercy of unexpected events and setbacks. Mamoru, Adele’s Japanese tutor and intelligencer has his own plans in place, pulling strings from Alexandria and ordering his operatives into the field; all while having to deal with Senator Clark’s blustering and forceful personality, as he decides that a high-profile rescue will serve his agenda and benefit his eventual marriage to Adele. At the same time, the Greyfriar stages his own rescue from deep within vampire territory, and spirits Adele away from Cesare and his bellicose plans. As things start to go wrong, as these separate plans cross, the action is ratcheted up nicely.

Due to the nature of the Griffiths’ vampires, humans have relocated their great empires and societies closer to the equator, given their enemies’ heat-related weakness:

“Sunlight did not turn them to dust, but they were pathologically susceptible to heat, which made them weak and lethargic. Hence, their tendency to come out at night and haunt northern climes.”

As a result, the British empire has shifted its capital to Alexandria, its new powerbase formed around its equatorial colonies – hence its new name, “Equatoria”. The authors have done a great job of blending these societies together, making Equatorian Empire an interesting melting-pot of races and social mores.

Perhaps my only real problem with the novel was Adele – her character seemed strangely disjointed. Where most of the other characters in the novel – whether major or minor – came across as fully-realised and complex, Adele didn’t seem seem as well constructed. She is at times waif-like and the archetypal high-born lady; then, seemingly out of nowhere, she performs some truly brilliant, assured acts of violence and self-defence. She’s certainly more at home in the politics and more ‘cultured’ environs she finds herself in, but her feats of battlefield bravery and prowess didn’t ring true for me. It’s as if the authors intended Adele to be a steampunk answer to Buffy the Vampire Slayer, but for me the execution did not have the assured Whedon-esque touch to carry it off. There was a late-in-the-novel revelation that there, indeed, might be something mystical going on with her, however as Chosen Ones/Messiah-figures go, this one wasn’t set up as well as she could have been.

Cesare, the second son of vampire King Dmitri (who is perhaps written with a nod to the Cesare Borgia and also Machiavelli’s The Prince), is the villain of the novel – a “chilling manipulator and a political strategist” beyond compare, ruthlessly and skilfully manoeuvring his increasingly-senile father and his court to serve his own ends. Contemptuous of humans, he is utterly convinced of the vampire race’s superiority. Cesare’s schemes turned upside down when the heir to the clan throne in England, Gareth, returns to court from his self-imposed secondment to Edinburgh. The rivalry between these two brothers is classic, and one can draw some slight references and influence from King Lear.

“Over the last century, though, civilization had drained the soul of the clan, of all the clans... The two brothers, who had never been close, gave up any hope of coexistence. Surprisingly, it was Gareth who abdicated his natural role as leader, wandering into his solitary wasteland of Scotland, barely deigning to attend clan gatherings unless he was compelled to do so. Cesare filled the void and became the king’s right hand... The younger prince was cunning and completely ruthless. He could be a skilful king, but he was no Gareth.”

Gareth is easily the most interesting character of the novel: “When the Great Killing began, he threw himself into battle in his father’s name and showed his mettle with violence, demonstrating that he was in line to be the next great king”, but over the century since the Killing, Gareth has become largely disinterested with vampire ‘society’, and has acquired a fascination for humans, their history and ways, yet doesn’t have much opportunity to experience or learn. Vampires in the Griffith’s world are very interesting creations: they can alter their densities to fly/float, they are preternaturally long-lived, and perfect killing machines.

“Vampires and humans had disturbingly similar anatomies and physiologies, except that vampires had sharper teeth, retractable claw-like fingernails, and eyes acutely adapted to nocturnal hunting.”

However, vampires cannot make things due to their “stunted sense of touch”, which makes it difficult for them to manipulate objects or use simple tools – part of the reason they have become so dependent on their cattle. For Gareth, the vampire species’ inability to feel properly is a tragedy:

“We make nothing. We create nothing…. And we leave nothing behind… We are parasites. Which is fortunate for you. It would have taken little effort to make your kind extinct. But we need you to survive… We have grown lazy and decadent, with no desire to go back to living in crypts and holes in the ground. We like the houses and the clothes. Not enough to make them, of course, but enough to want slaves who will make them. And we like having meals that don’t require hunting or danger. It seems that we aren’t even good parasites anymore.”

Other characters in the novel – even the minor players – are well-drawn and realistic. This shows a welcome attention to the world the authors have created, and when even the peripheral cast appears fully-realised, it adds to the whole novel. Flay, the vampire war chief, whose loyalties are flexible and realistic – serving whoever is currently most powerful, while retaining a preference that is not solely informed by pragmatism. The attention to world-building is also impressive, and the authors serve the reader well by only rarely succumbing to transparent info-dumps, while simultaneously writing these in an adept manner – they certainly benefit from the fact that the alternate history and geopolitics they have created are interesting, which makes these info-dumps actually quite welcome.

The authors write very well, if at times the writing can be a tad schmaltzy or over-wrought (such as Adele’s emotional reaction upon entering Canterbury Cathedral). Their prose pull the reader along at a considerable clip; it’s next-to-impossible to only read one or two chapters at a time. The characterisation of the American and Equatorian societies, not to mention the vampire court, are skilful and, in the case of the former two, offer some opportunities for good-natured poking-of-fun at stereotypes. The American and Equatorian/British stereotypes are amusingly treated, even if they are laid on a bit thick at times. Senator Clark is portrayed as the typical brash American, something akin to the Teddy Roosevelt-frontiersman-figure, only minus the erudition.

That the authors haven’t expended too much time and space on explaining their entire world suggests that future volumes will flesh out our picture of this alternate history, and I must say I’m eager to learn more of the other main surviving human societies – the Americans and the Asians – as well as other vampire clans. Indeed, I think the authors could have afforded to give us a little more world-building in this novel, too, than they actually have.

I enjoyed reading The Greyfriar, and I will definitely read the next instalment of the series (as-yet-untitled, and expected February 2012). I do hope the character of Adele settles down in the next book, however. If the Mummy movies were blended with Buffy The Vampire Slayer and set in a steampunk world, The Greyfriar might very well be what you got.

While I do think it would have benefitted from being darker, The Greyfriar is an entertaining vampire steampunk adventure, and is recommended for people who like their fantasy with politics, plenty of action, a smidge of pulp romance, and just a hint of horror.

Posted by Civilian Reader at 6:06 PM