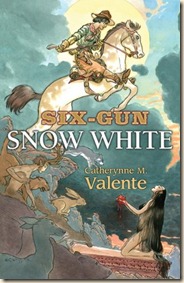 Coming at the end of January 2013, Catherynne M. Valente’s latest novella is a reinvention of one of the best known fairy tales, transposed onto the Old West:

A plain-spoken, appealing narrator relates the history of her parents – a Nevada silver baron who forced the Crow people to give up one of their most beautiful daughters, Gun That Sings, in marriage to him. With her mother’s death in childbirth, so begins a heroine’s tale equal parts heartbreak and strength. This girl has been born into a world with no place for a half-native, half-white child. After being hidden for years, a very wicked stepmother finally gifts her with the name Snow White, referring to the pale skin she will never have.

Filled with fascinating glimpses through the fabled looking glass and a close-up look at hard living in the gritty gun-slinging West, readers will be enchanted by this story at once familiar and entirely new.

I’m quite looking forward to this, and hope to make it part of my Weird Wild West series of reviews and interviews, which I’ll be highlighting throughout the year.

Posted by Civilian Reader at 6:38 AM