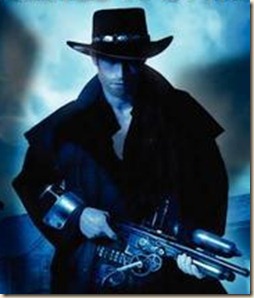 I stumbled across Michael P. Spradlin’s latest novel, Blood Riders. This is not entirely surprising, given that this is his first book for adults (he has been writing books for children for a while). I’m pretty interested in the wave of Wild West-meets-Urban Fantasy novels that have been cropping up over the last year or so, and therefore became very interested in Blood Riders. In advance of a planned series of reviews and posts on this sub-genre, I get in touch with Michael to ask him about the novel… 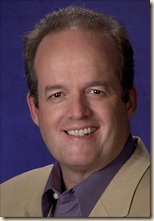 Let’s ease into things: Who is Michael Spradlin?

Ah. We ease into things with the hardest question anyone can be asked? I see how this is going to go! I’m a writer known primarily for children’s books. My Youngest Templar series has sold in thirteen countries. Spy Goddess: Live and Let Shop, my first novel, was an Edgar Award Nominee for Best Juvenile Mystery. Blood Riders is my first novel for adults.

Your latest novel, Blood Riders, was recently published by Harper Voyager. How would you introduce the novel to a potential reader? Is it part of a series?

Blood Riders is a blend of Hell On Wheels meets The X-Files. Its setting is the post Civil War American west. Captain Jonas Hollister was sent to Leavenworth Prison after leading a platoon on a rescue mission. When he claims his platoon was destroyed by “strange blood drinking creatures” no one believes him and he’s forced to spend his days digging wells in jail. One day the famed detective Allan Pinkerton arrives with an offer of freedom in exchange for a dangerous assignment: The creatures, perhaps the same ones who killed Hollister’s men, have surfaced again and are spreading fear throughout the west. If Hollister is willing to hunt, find and kill these things, he’ll be granted his freedom and his name and honor restored.

He agrees and along with a unique inmate named Chee, Chee’s dog and Monkey Pete, the engineer of Pinkerton’s specially outfitted train, they take off on a quest to root out these creatures and destroy them. As they proceed along the trail they are shadowed and eventually joined by Shania, the leader of an ancient race of beings known as Archaics. The creatures that destroyed Hollister’s men are led by Malachi, Shania’s rival who has violated centuries of Archaic law by feeding on humans. She joins forces with Hollister to defeat him before mankind wipes out her entire race.

As to the series question, it was a one-book contract. It’s certainly set up to continue as a series, and I hope it will. 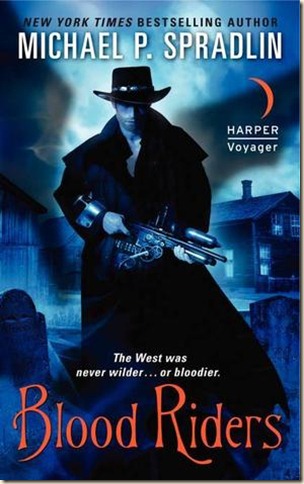 I’ve always loved both horror and westerns. The actual inspiration for the book came out of an article I read about human evolution. It got me thinking about evolution in the realm of fiction. In fiction, especially in horror fiction, we suspend our disbelief and assume that monsters are real. And with that assumption in place, I wondered about the “evolution” of monsters. Vampires, for instance, owe much of their modern interpretation to Bram Stoker’s Dracula. But what about before Dracula’s appearance? Were there early, more primitive forms of the vampire? The werewolf? What about witches and other paranormal beings? Did they follow an evolutionary track like human beings? So I wanted to explore that.

And once that idea took hold, that monsters paralleled our development, I thought it would be interesting to put human beings up against these monsters in a slightly more primitive time in our history. Since the post-Civil War American west is one of my favorite periods that’s where I set the story.

As for general inspiration, it seems like I’m never at a shortage for ideas. Inspiration is a funny thing and it comes to me from all kinds of sources. I have journals full of story ideas. Like most writers, I usually find my next idea when I’m researching or reading in preparation for writing another project. That happens a lot. 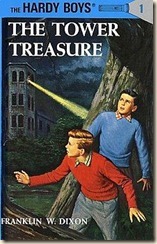 I would probably say my first introduction to true ‘genre’ fiction came through The Hardy Boys. At age eight or nine, the mysteries they encountered seemed unsolvable to me. Yet they always came through. I was also a huge Science Fiction reader in my youth. Asimov, Heinlein and Bradbury were my personal three wise men. I also loved comics.

I love writing more than anything I’ve ever done. I enjoyed my work in the publishing industry and being around books and people who work in the business was vastly rewarding. It’s an important and valuable business and I loved being part of it.

As for the practice of writing, I just sort of dive in. I try to write a little bit every day and if I’m not actually writing, I’m either revising or I’m making notes for research or reading something for a project.

Writing is something I’ve always been interested in. I don’t think I had that ‘bolt of lightening’ moment. I’ve always loved books and reading and I think I just naturally progressed to writing. My first published work was a children’s picture book called The Legend of Blue Jacket and my first novel was in a YA series called Spy Goddess: Live and Let Shop. I’m still quite proud of them. 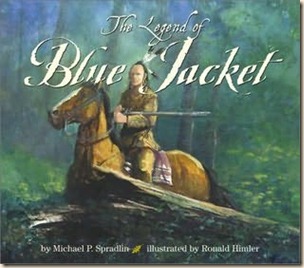 I think the Urban Fantasy and Horror genres are incredibly strong. It’s funny because I really never think about what ‘genre’ my book is going to fit into. Most books can and do blend several genres. I just try to tell a good story. That’s my only goal.

Blood Riders blends a lot of elements from different genres and it was a challenge to stay true to those ‘rules’ in that regard. It was also the first novel I’d written in third person that proved to be much more challenging than I expected. 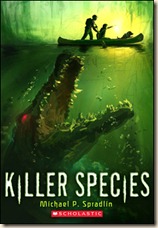 My next two projects are books for Middle Grade readers. Coming from Scholastic is a series called KILLER SPECIES. The first book, Menace From The Deep, arrives in January. Then I’m co-writing books 4-6 in the I,Q series with Roland Smith. The first book I,Q: The Alamo will be out in March 2013.

Right now I’m on a Robert Heinlein kick. He was a staple for me growing up and it’s been fun to revisit his work. What a visionary. And it’s stunning to me how well his writing and his ideas hold up.

What are you most looking forward to in 2013?