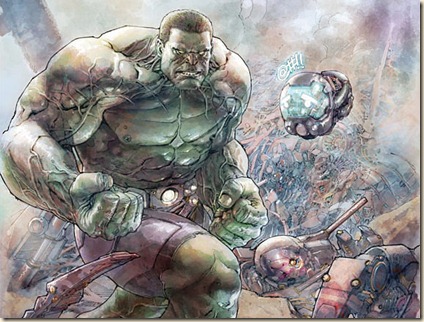 Managed to get my hands on a couple more issues from Marvel’s latest re-launch/-boot/-branding: Mark Waid’s Indestructible Hulk and Rick Remender’s Uncanny Avengers. Two pretty noteworthy titles, one was excellent while the other has some way to go before I’m fully convinced.

Caution: If you haven’t read Avengers vs. X-Men and don’t want certain moments of that Event spoiled, I strongly advise that you do not read the review of Uncanny Avengers. Just sayin’. 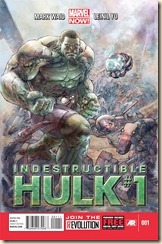 Combined they are the Strongest, Smartest Weapon on the planet! And now, the indestructible Hulk is an Agent of S.H.I.E.L.D.!

Bruce Banner has concluded that he is incurable, and that he will forever be stuck with the Hulk as a part of him. He meets with Maria Hill (director of S.H.I.E.L.D.), and they reminisce about the battle against the Phoenix Force. Banner mentions that the Hulk was an asset in the final battle, a distraction while Tony Stark solved the problem by engineering a solution. This, for him, is part of the larger problem:

“Tony Stark and Reed Richards use their genius to save the world every other week. That’s how they’ll be remembered in history. Meanwhile I -- I who, forgive me, have just as much to contribute -- will be lucky if my tombstone doesn’t simply say ‘Hulk Smash’.”

Banner has decided to manage the Hulk as a chronic condition. This involves some fancy contact lenses that monitor his life-signs as an early warning system, and also using “Banner Time” more productively:

“Invent things. Fix things. Improve things. The Hulk has caused immeasurable damage and heartache over the years. It’s past time I started balancing the scales by doing as much good for mankind as possible.” While they talk, we learn that Hill is there on assignment, and they’re just waiting for the take-down of a mathematically-obsessed villain to kick off. This issue acts, therefore, as Banner’s audition for a role with S.H.I.E.L.D. It’s very nicely done, in fact. Hill agrees to use the Hulk in the mission, and a tentative alliance is worked out. The battle itself is perfect Hulk – huge, over-the-top, and shit gets smashed up pretty good. 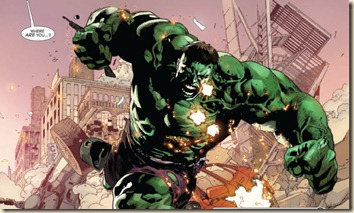 Yu’s artwork – which I know best from Superman: Birthright, which was also penned by Waid – is excellent and distinctive. It has both clarity and a sketchy quality to it that is eye-catching and beautiful in its own way. He is equally capable of conveying the relative peace and ordinariness of Banner and Hill’s meeting at a diner, as he is the ferocious dynamism of the Hulk in action. Gho’s coloring enhances the artwork brilliantly, too.

This is a superb first issue, and I can’t wait to read more of this series. 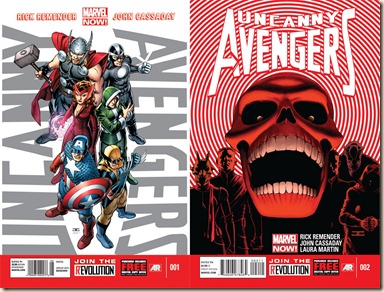 #1 – From the ashes of AvX an all-new, all-different Avengers assemble! Captain America begins his quest to create a sanctioned Avengers unit comprised of Avengers and X-Men, humans and mutants working together – so why is Professor Xavier’s dream more at risk than ever? The first attack of the most loathsome villain in history will quake the Marvel Universe forever! The funeral of one of Marvel’s greatest heroes!

#2 – What are The Red Skull’s new powers? How did he become the most powerful man on Earth? Can Havok and Thor defeat the spreading influence of Honest John, The Living Propaganda?! Rogue and Scarlet Witch trapped on the Isle of the Red Skull's S-Men! Wolverine & Captain America uncover the truth behind the worldwide mutant assassination epidemic!

This is, effectively, the flagship Marvel NOW title. Drawing together the X-Men and Avengers, it’s been billed as a pretty big deal. Sad to say, though, it didn’t really live up to my expectation. Especially since I rather enjoyed Rick Remender’s other Marvel NOW title, Captain America.

At the start of Uncanny Avengers #1, we join Wolverine as he reminisces about his past with Professor X, who was killed during the Avengers vs. X-Men war. He then joins his fellow mutants and gives the eulogy at the Professor’s funeral. It’s a nice way to orient new readers into this new era of the X-Men and Marvel universe as a whole. Past conversations between Wolverine, other X-men and Xavier crop up throughout this issue, lending it a somber air. 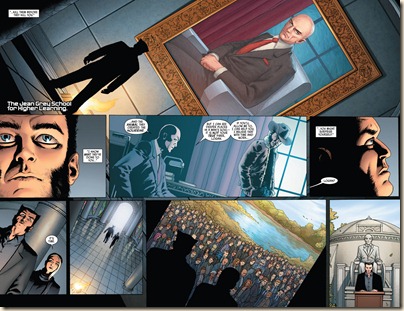 In the meantime, Alex Summers (“Havok”) has gone to the Brig – S.H.I.E.L.D.’s mega-prison for mutants and super-villains – to see Scott (“Cyclops”), the former X-Men leader and one of the five mutants imbued with the Phoenix Force during AvX. Alex confronts Scott about what he did, his violent pursuit of his agenda, in an attempt to find reason and explanation. Cyclops feels no remorse, and is dismissive.

Feeling let down, Alex leaves the Brig and we get one of my favorite panels in a long while: he comes face-to-face with Captain America and Thor. They ark him out for a coffee (below). And together they discuss the formation of and his role in a whole new team, combining members of the X-Men and the Avengers. 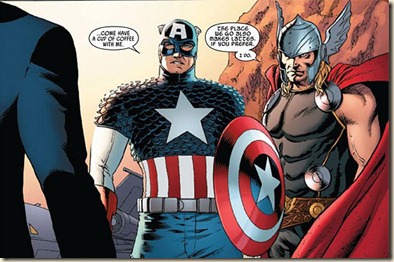 While they are still discussing things, a supposedly-reformed villain, Avalanche decides to kick off in New York, stirring up yet-more, fresh anti-mutant sentiments among the human population.

The second issue moves things forward a little bit more: there is still no Uncanny Avenger team assembled, by the its finish. The pacing is refreshingly unhurried, in this respect. It makes a nice change from some of the frenetic series Marvel published in the past. Readers learn more of Red Skull’s plan, and how the good guys intend to meet the challenges of a post-Phoenix Force world. At the end of issue one, Rogue and Scarlet Witch were apprehended by some strange evil mutants, with a penchant to speechify, and spirited away to Red Skull’s Evil Villain lair. 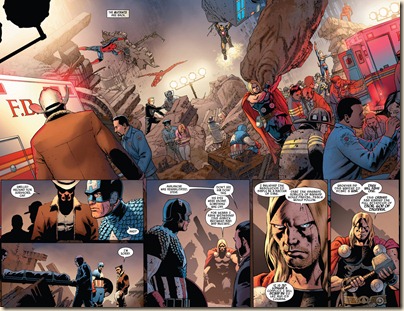 This series is sadly not as good as I’d hoped it would be. My problem stems from the villain: Red Skull is too much of a cartoon in this (Brubaker did a much better job with him in his first run of Captain America). The premise remains pretty good, though. Red Skull’s first major act is horrific (at the very end of #1), and I’m intrigued to see how it turns out. I also did like the way Rogue and Scarlet Witch discover what Skull’s done, as we get a good sense of their shock, horror and grief.

That being said, I am just not hooked to the story, yet. The artwork is pretty decent: it’s nicely composed, colored, and is pretty clear and detailed, without being over-stylized. I wouldn’t say this is a Must Buy, yet, but I remain somewhat intrigued by it nonetheless. 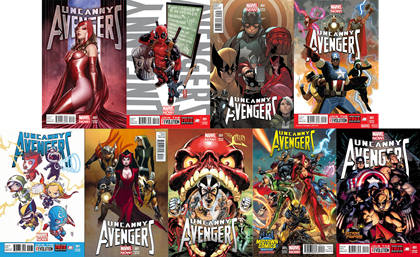 Posted by Civilian Reader at 12:07 AM