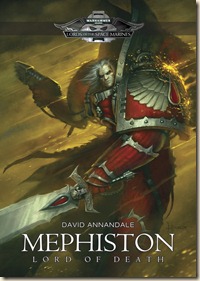 Another Annandale book coming up, which I initially missed on Black Library’s website. This one seems to be a first novel in a whole new series from the publisher, “Lords of the Space Marines”, and focuses on Mephiston, Chief Librarian of the Blood Angels.

Chief Librarian of the Blood Angels, Master of the Black Rage, Lord of Death... By these titles is Mephiston known to his brother Space Marines. But deep within Mephiston’s tortured heart lurks another, the spectre of who he used to be before his death and rebirth on the war-torn world of Armageddon.  As Mephiston leads the Blood Angels into battle in the Pallavon system against the might of mankind’s archenemy, he must grapple with his inner daemons as well as those around him, as the ghost of Brother Calistarius, the man he once was, returns to haunt him.

In a move that will no doubt bother some people, this will only be available in this format for seven days, from January 25th to February 1st. The book is presented in a “red leather-effect slip case”, comes with an exclusive short story chapbook for Annandale’s previous Mephiston story, Eclipse of Hope, and also an artwork postcard. I must admit to not being bowled over by Eclipse – while I thought Annandale had done a great job of giving the Blood Angels their own voice, it didn’t quite work for me. Perhaps it will be different in Mephiston. 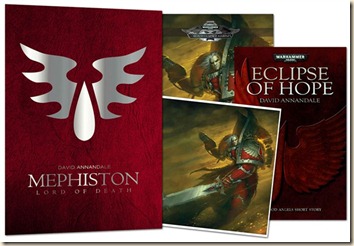