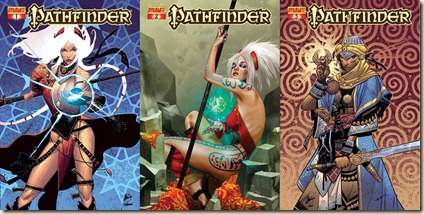 Valeros can rely on only his sword arm and his friends, the mysterious and beautiful sorcerer Seoni and silver tongued quick-witted elven rogue Merisiel, but nothing can prepare him for the dangers that lurk ahead. The scattered and chaotic goblin tribes of Varisia are changing, growing in power and unifying in ways no one has ever seen before. At the heart of this strange evolution is an ancient evil looking to establish itself anew.

I know Jim Zub from his work on Skullkickers (review of volume one, soon), and I got recently had the opportunity to read the first three issues of Pathfinder. What I found was a story clearly written by someone with an abiding, deep love for classic sword-and-sorcery. It’s bloody, action-packed, a little daft, and a hell of a lot of fun.

The story is a classic (some might say typical) tale of a band of heroes solving a problem for some oppressed. The group of heroes must save a settlement that is being harassed by a warband of deformed goblins. The goblins are far more vicious and headstrong than is normal, which automatically puts the heroes on the defensive.

Over the course of these three issues, Valeros and his companions must uncover what is making the goblins of Varisia so ferocious. Of course, uncovering the source of their new strength and stopping it are two entirely different things. Along the way, our heroes capture a doomsday cultist, who will try endlessly to drive a wedge between the human and non-human companions. Their journey will also take them across the haunted cemetery known as Pauper’s Grave, luring them into the paralyzing touch of flesh-eating ghouls.

The dynamic between the group is fantastic, and we are treated to a great deal of pretty fun banter. It never takes over the story, nor does it descend into flippancy or become excessive. There’s just the right amount of humor and action to keep more serious fans reading and, at the very least smiling, throughout. It’s very well balanced.

“Yes, but they don’t know that. They have cowardice and tiny brains. We have surprise and flashy attacks.”

The three issues are filled with lots of comfortable, familiar fantasy tropes, all of which are lovingly utilized and realized on the pages. Everything from Valeros’s tendency to charge into the fray without thinking, the elf’s world-weary resignation with being superior, and so many more. For long-time fantasy fans, this will be a very comfortable and fun read.

“Between their voracious appetite and poor judgement there’s almost nothing goblins won’t cram into their mouths.” 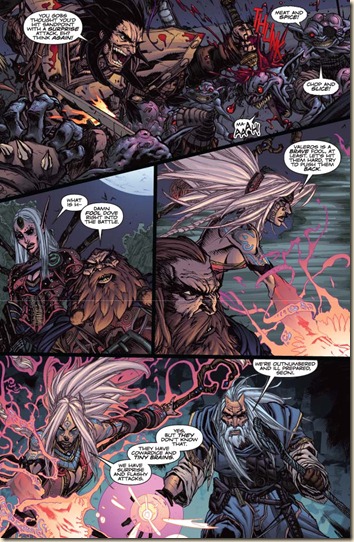 The artwork is strong throughout, too. Each panel and page is loaded with detail. I particularly liked the facial expressions – all of the characters are rendered brilliantly, with humor and often subtlety, with carefully drawn facial expressions and a keen attention to detail that really enhance the scripts. 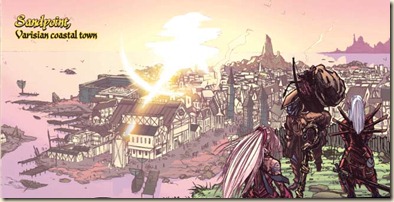 Each issue has some nice extra content for fans of the Pathfinder RPG, and also anyone who would like just a little more detail of the world in which this story is set. For example, the first issue includes a detailed prose-intro to Sandpoint, the town our heroes stop at for the night (it includes a very nice map), as well as a couple of hero profiles. The other two issues include character profiles for the rest of the group. Each issue also includes scenario rules for those would would like to play the events of the issues as part of a Pathfinder game. To make the printed issues more of an incentive, they also come with exclusive removable, playable tactical maps and posters. I thought all of this extra content was a really nice touch.

This is great fun, and should appeal to fantasy comic and fiction fans equally. It would particularly appeal to fans of Warhammer, Magic: The Gathering, Valen the Outcast, Zub’s other series Skullkickers, and fans of authors like Sam Sykes who offer alternative, tongue-in-cheek takes on fantasy tropes with a nice, twisted edge.

[Having read this, and knowing what I do about Skullkickers, I’m really interested to see what Zub does with DC’s Birds of Prey, which he will soon be taking over.] 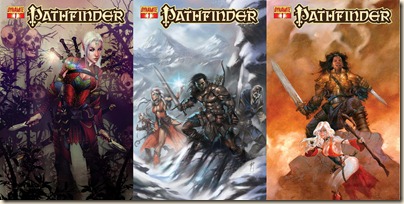 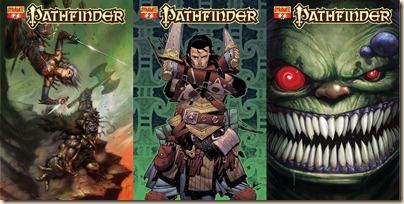 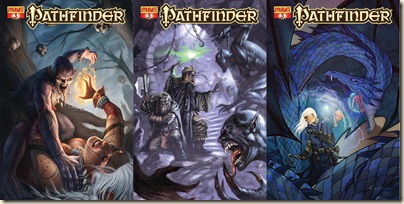