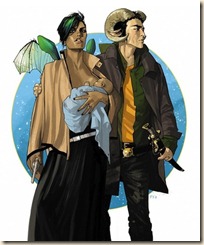 When two soldiers from opposite sides of a never-ending galactic war fall in love, they risk everything to bring a fragile new life into a dangerous old universe. Saga is the sweeping tale of one young family fighting to find their place in the worlds. Fantasy and science fiction are wed like never before in this sexy, subversive drama for adults.

I’d read the first two issues of Saga before getting this book, and I’ve been looking forward to getting caught up. Saga is a brilliant, weird and twisty sci-fi tale of war, family, and survival. It is easily one of the best new comics of 2012, and this is a superb opening collection.

Saga has been described as “Star Wars-style action collides with Game of Thrones-esque drama” in an “original sci-fi/fantasy epic for mature readers”. That’s a bit of a mouthful, vague description, but it certainly caught my attention when I first read it. I think the Game of Thrones mention is pushing it a bit, but it does have some similar themes. Namely, how to survive and protect your family in a war environment. And it is also set to the backdrop of an expansive sci-fi reality, complete with Robot Overlords and colorful alien species.

There’s an obvious Romeo & Juliet feel to the story, too, as Alana and Marko are from different races – the two races that are warring across the Galaxy, in fact. As the story starts, Alana is giving birth to their daughter – who also happens to be the narrator. This last fact, I thought, was an ingenious narrative device, allowing for some excellent context and also amusing asides, quips and editorializing throughout. 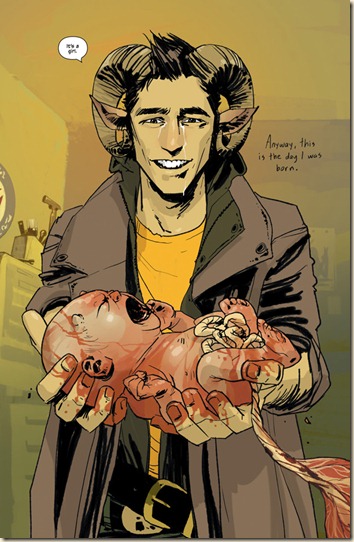 At first, I worried that the series might be a little too weird for me (I’m quite conservative/conventional in my comics’ taste), but I quickly found myself falling in love with the story. The relationship between the two main characters feels natural and believable, the banter is funny and realistic, and they’re great guides to the setting. The narration is great, and quite moving at times. It’s like we’re reading someone’s very personal memories, or perhaps their diary.

Prior to reading Saga, I had only tried one other of Vaughan’s comic series – Y The Last Man, which is superb. Saga proves that Vaughan is a gifted writer, and among the highest skilled comic-writers. I’ve picked up the second and third Deluxe editions of Y The Last Man, and also the first Deluxe edition of Vaughan’s (less easy to find for some reason) Ex Machina. I’ll be reading one of the former this week, if I have time. 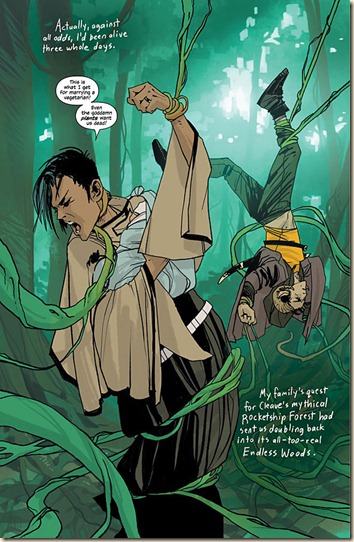 The writing is superb, with a lot of original and weird elements thrown into the mix. The first book chronicles the new family’s flight from Cleave, and the dangers and horrors they face as they dodge freelancers and Royalist forces who are hell-bent on killing them and capturing their newborn child.

Staples’s artwork, as you can see from the samples included in this review, is distinctive and eye-catching. She has infused almost every panel with interesting, sometimes humorous details, while also realizing a universe that is completely original. 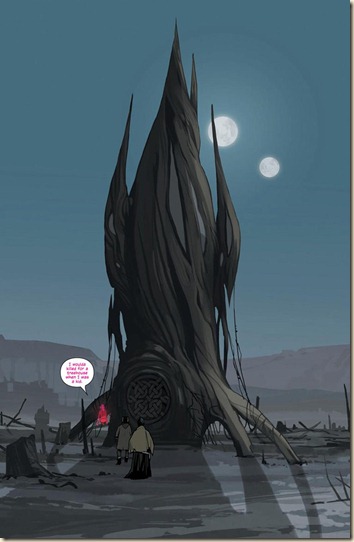 This is a spaceship. A seriously cool one, too…

I tend to prefer my comics a little more “normal”, but Saga is delightful in its own, twisted way. It is a heartwarming tale of family and survival, and one I am very much hooked on. I really can’t wait for the next collection to be published (I still can’t afford to buy the individual issues, unfortunately). 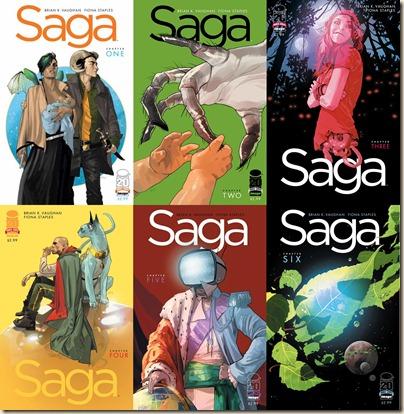 Posted by Civilian Reader at 10:22 PM