I just stumbled across this series by accident, when I spotted a preview for the second issue on Comic Book Resources. I liked what I saw of the art, but couldn’t really tell much about the story. I did a bit more digging (including checking out the preview for the first issue), and eventually found some more information about the series. I Love Trouble, by  Kel Symons and Mark Robinson debuted in December, and follows the story of Felicia Castillo, a New Orleans grifter, who is on the run from mobsters. In the first issue, she discovers she possesses an unusual superpower in the middle of a plane crash. This is page six from that issue, in which Felicia realizes her strange new power. The page made me chuckle, so I thought I’d share it on here: 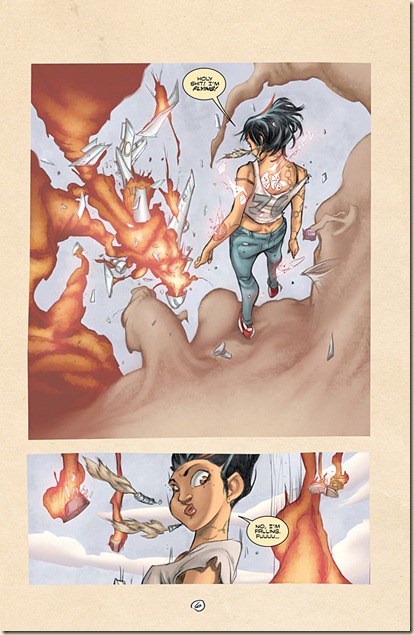 Here’s some more information, from the press release on Image Comics’ website:

Instead of it being the end for the Felicia, the crash turns out to be a new beginning. Felicia discovers she has the ability to teleport, a power she thinks will be an easy fix to all of her problems. But Felicia is someone who follows trouble, and her power opens up a whole new world of crime and exploitation.

“I imagine her as someone who was always on the run from one thing or another in her life — came from a broken home, had terrible experiences with relationships — and when things got bad she just picked up and left,” said writer Symons. “So the idea of teleportation fed into that.”

I Love Trouble is Symons’s first comic series. Issue #1 was published on December 5th, and #2 was published yesterday. [Both are available from comiXology.] I think I’m definitely going to have to give this series a try.