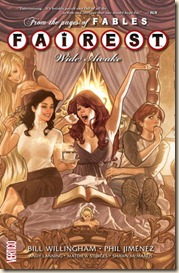 The first 6-issue tale follows the misadventures of Briar Rose immediately after the events of FABLES #107 (collected in FABLES VOL. 16: SUPER TEAM), in which she was stolen away by the goblin army.

The first issue of Fairest was the first comic I’d read written by Bill Willingham. Since then, I’ve read the first five Deluxe editions of Fables, his expansive re-interpretation of fairy tales transposed onto a contemporary setting (New York, for example). He has quickly become one of my favourite comics writers. With a bit more Fables under my belt, I was a little better informed about some of the content of Fairest. This is a superb series.

This is a very fun story, offering an interesting take on the popular fairy tale notion of “Love’s True Kiss”. It follows Briar Rose – her current ordeal and also her past and the origin of her curse. To begin with, she and the Snow Queen have been captured by a Goblin army, after Briar Rose’s curse put everyone to sleep – pricking her finger on a thorn sends people in a specific radius of her to sleep, until she can be woken up by “true love’s kiss”. This is where Ali Baba comes in – he’s stumbled across a djinn’s bottle, only to discover the little blue inhabitant – Jonah – is not the wish-granting kind. Rather, he is an information djinn, whose sole purpose is to know information. Convinced by the djinn, he infiltrates the Goblin encampment, and discovers two sleeping beauties… 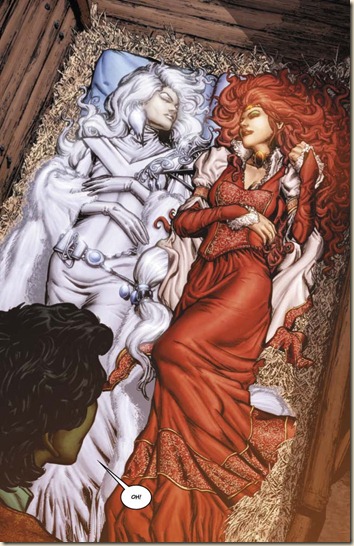 After waking them both up, he must battle his way through the goblins, whisk Briar Rose off to safety, and avoid the icy creations of the Snow Queen, who is also interested in hearing their story. Not to mention indulging her slightly evil character (she has been an ally and general of the Enemy in Fables). In order to save his new friends, Jonah is forced to recount Briar Rose’s history, which gets them all into trouble. Names have power, and if you repeat one often enough, you can sometimes receive an unwelcome, violent visitor… 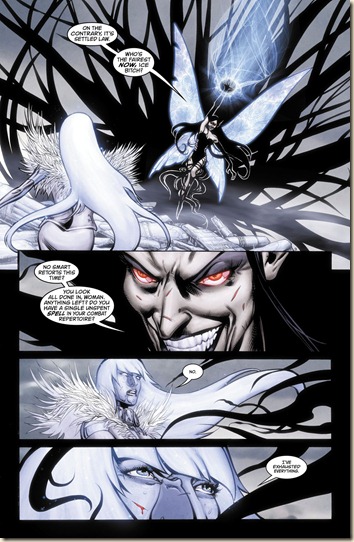 There’s a fun moment when the goblins uncover the escape, and one of them cries out that they must “Chop them with stereotypical lack of reserve!” The book is filled with quips like this, at once poking fun at tropes and fable norms, while also embracing them lovingly.

The book’s final chapter is a stand-alone tale of an escaped Lamia (female, shape-shifting vampire). Beast and Saint George are tracking the creature, but not necessarily working together. We join the hunt in Hollywood, as the two detectives are closing in. I didn’t see the ending coming at all, and it could be a spoiler for an un-yet-read chapter of the larger Fables story. It’s brilliantly done, and packs an emotional wallop at the end.

If you’re not completely caught up on Fables, you may spot some other spoilers sprinkled throughout the book. They’re vague enough, I think, to not spoil the original story when you manage to get around to it, but they are certainly there. Most of the story, however, focuses on Briar Rose’s story. And then a big battle between an icy witch and an evil fairy queen. Not to mention a reversal I had not anticipated – it’s done very well, and actually makes sense, too. 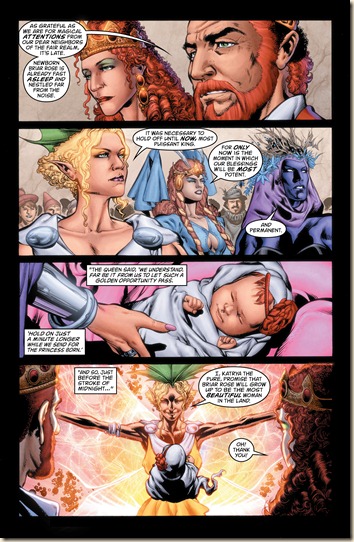 The first six issue are rendered in truly stunning artwork: it is highly detailed, sharp and beautifully colored. Unfortunately, the examples I’ve included in the review don’t quite do it justice, as they don’t quite capture the vibrancy and often jaw-dropping imagery. There are a number of full- or double-page spreads that put a majority of other books to shame. 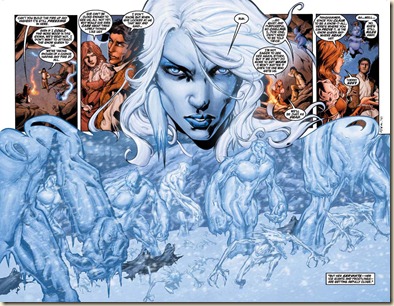 The final, standalone chapter features a little more stylized artwork, reminiscent of some other Fables stories, and conveys a wonderful vintage noir feel to the story. 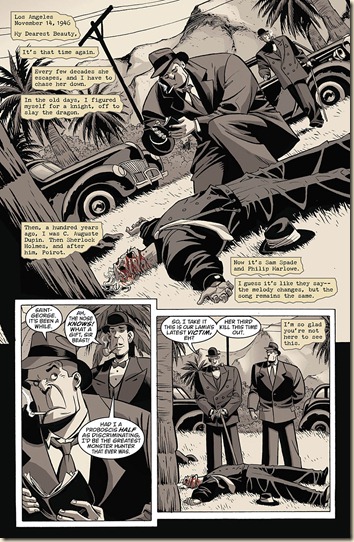 As with Fables, I love the characters and reality that Willingham and his collaborators have created. This is very highly recommended. A must-read for all fans of comics and fairy tales.

Following this first collection, Willingham will serve as a consultant on all story arcs and introduce new writers from other mediums to the FABLES mythos. Award-winning author Lauren Beukes has been handling the current story arc. 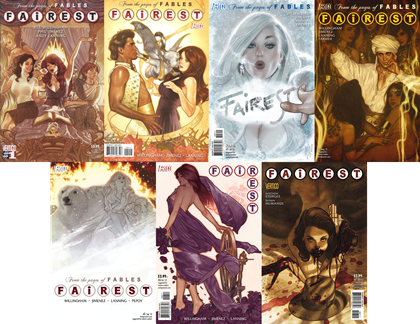