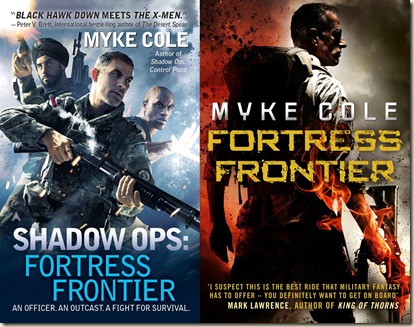 The Second Shadow Ops novel: Improves on the first

The Great Reawakening did not come quietly. Across the country and in every nation, people began to develop terrifying powers — summoning storms, raising the dead, and setting everything they touch ablaze. Overnight the rules changed…but not for everyone.

If you’ve been reading CR for a while, you may have noticed that I am very much a fan of Cole’s debut, Control Point. When I read that, it fit my tastes perfectly and just worked on pretty much every level. A year later, and its sequel Fortress Frontier drops. And, I am happy to report, Cole has done a tremendous job of improving on Control Point in almost every way. This is, all-round, a better novel than its predecessor.

One tricky thing to do with a review of Fortress Frontier is to discuss the plot too much and avoid spoilers at the same time. The story moves pretty fast, but not at the near-break-neck pace of Control Point. We start the novel following Colonel Alan Bookbinder, a high-ranking desk-jockey at the Pentagon, who has just come up latent, and is freaking out (as one probably would do). For one thing, he and others can’t seem to figure out what his power actually is. As a result, they refer to his as a “latent grenade”, and everyone’s just holding their breath, waiting for him to go off…

Unlike Oscar Britton in Control Point, though, he follows the law and turns himself over to the SOC, and they ship him to FOB Frontier – where Oscar was held in the first novel. The events of roughly the first third of Fortress Frontier take place at about the same time as a lot of Control Point.

I really liked Bookbinder, and in some ways prefer him to Oscar. He’s not as macho or physical as Oscar, and instead is self-conscious about how separate his work and experiences are from the actual soldiers. As a result, we get some good discussion of the civilian-vs.-soldier divide in the US armed forces.

I still love the magical elements of this reality. Cole has created a great system, with well-thought-out and believable rules. The limitations of the magic are well-portrayed. There aren’t any deus ex magica moments, either, for which Cole should be thanked. The magic is, of course, a central part of the story, but it never overshadows the actual story, and I didn’t feel like it was ever a crutch – Oscar uses his Portamancy frequently, true, but there were plenty of moments when I thought it would have been so easy for Cole to ‘fix’ things just by having his characters rely on their magic abilities. But he didn’t allow them to. Very pleased about that.

When we switch over to Oscar’s story, we learn a little more of what happened to his fellow reformists, and also Scylla the antagonist from Control Point whose actions at the end of that novel have put the lives of everyone at FOB Frontier in jeopardy. As the situation at Frontier gets worse, Bookbinder finds himself thrust into a position of command, which only makes him worry more, as he believes he has the “leadership capability of a wet sock”.

One of the things I noticed in Fortress Frontier was Cole’s Terry Brooks-esque approach to character P.O.V. switching: he makes you care about the character(s) we’re following, getting comfortable and settled in to following them around. Only then he switches things up. This can feel frustrating, but then just as we’re getting into this new P.O.V., things switch again. The perfect example of leaving us wanting more.

After the chapters focusing on Bookbinder, we switch over to Oscar’s story. He’s still on the run, hunting Scylla. At the same time, he decides to seek out the selfer underground, who have been operating out of New York. This is another group I think Cole’s written very well, and there was something about them, their language and MO that reminded me of the Occupy movement. Occupy the Reawakening, if you will.

On the whole, Cole’s prose is much better in Fortress Frontier, something that stands out from the very beginning. They are more polished and assured, and generally better constructed. Once more, the author avoids info-dumps, and again filters pertinent information and exposition through the action and dialogue, leaving chapter epigraphs the responsibility of filling in any blanks and also adding depth and color. This series is one of the few that uses epigraphs so well, and I never found them pointless. One thing I enjoyed was the epigraph for chapter 25: a snippet from a statement released by “Render”, a member of the Selfer underground, I thought it had a nice shade of Magneto to it:

“The issue isn’t fear of upsetting the established social order, it’s fear of upsetting the genetic one. What if Selfers aren’t just the latest brand of insurgent malcontents? What if they’re the next rung on the evolutionary ladder? I doubt Neanderthals were big fans of the first Homo Sapiens either.”

Equally impressive is the extra world-building in this novel, which I really enjoyed. Not only do we spend more time on the other side, in the magic realm, but we also do a little more travelling in the real world – specifically to India. There are some nice surprises along the way, and there were two in particular that had me muttering, “No way!” in an oh-so Keanu Reeves manner. There’s plenty of interesting and realistic character development as well. Some old faces from Control Point turn up, but not everyone finishes the novel with the same opinions or allegiances. One final note on the characters: the Sculptor is one of the most horrific characters I’ve read in a while. Damned creepy, and expertly used in the story.

Fortress Frontier does exactly what a second novel is meant to do: it improves on the author’s debut. The series story moves forward, and despite not as much progression for Oscar’s story as I think people may hope for, I think this is a solid addition to the series. Really can’t wait for the third in the series.

It was also announced on January 1st that Ace have signed Myke up for another three books in the Shadow Ops series, which is great news. Congratulations, Myke!