Guest Post: “It’s the End of the World as We Know It (Again)” by Gail Z. Martin 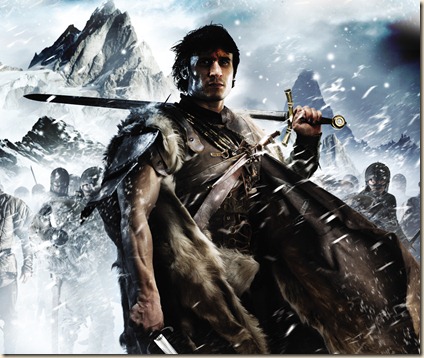 Gail Z. Martin is the author of some great, dark fantasy novels. Most recently, Ice Forged, the start of a new series: The Ascendant Kings Saga. Ice Forged is framed around a great premise, and I hope to read and review it very soon. To celebrate the launch of this new series, here is a guest blog from Gail…

“It’s the End of the World as We Know It (Again)” by Gail Z. Martin 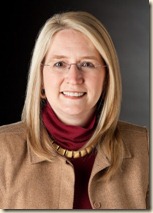 What is it about an impending apocalypse that captures the imagination?

Having just survived the “Mayan Calendar” apocalypse, the idea is pretty fresh in everyone’s mind. Thanks to the Internet, warnings of immanent doom seem to crop up fairly often, so much so that most of us roll our eyes, mutter “another one” and go about our daily business.

Until the time it turns out to be true.

In my new book, Ice Forged, I look at an end of the world scenario in a medieval setting, through the eyes of the survivors. The magic on which they have come to depend — in much the way we are dependent on our power grid — has vanished. With it goes the monarchies it upheld, the conveniences and necessities it had provided, and the control over the natural world it imposed. Amid the chaos and anarchy, the survivors are faced with the challenge to survive long enough to see if there is truth to ancient legends about a way to restore the magic.

I set my apocalyptic story in a medieval setting for several reasons. First off, most modern-day end of the world stories don’t capture my attention. I’m jaded, and they sound too much like overhyped headlines. That wasn’t the setting in which I wanted to immerse my imagination for the better part of a year.

Secondly, I wanted to explore the magic-instead-of-technology angle, as well as the idea that when we have a simple shortcut to do vital tasks, we are at risk of forgetting how to do things the old way. If the technology (or magic) fails, how do individuals or communities survive if the low-tech ways have been lost?

And the third element that intrigued me was the idea of who a society values and who it throws away. In Ice Forged, the man who may be able to restore the magic is a disgraced lord who has been exiled to a prison colony in the arctic. When social norms and civilized culture collapse, the skills and characteristics that made a person an exile — or even a criminal — just might be what it takes to survive.

It’s especially interesting to me because Western Europe did experience an apocalyptic scenario in the Black Plague. The sheer magnitude of casualties, the swiftness of the disease’s spread and the fear that accompanied it changed the economic, cultural, political and religious fabric of a continent. Most of the time, we read the 30,000-foot overview and see the Plague years through the lens of time. But to those who endured it, I’m certain it felt like the end of the world was upon them.

Books and stories are interesting things. They germinate from the odd bits and pieces in a writer’s memory, shaped by the question, “What if?” I’m looking forward to further exploring my medieval post-apocalyptic world, and I hope you’ll join me! 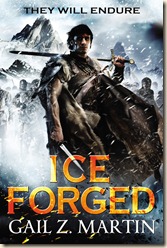 Ice Forged was published by Orbit Books this January. Here is the novel’s synopsis:

Condemned as a murderer for killing the man who dishonored his sister, Blaine “Mick” McFadden has spent the last six years in Velant, a penal colony in the frigid northern wastelands of Edgeland. Harsh military discipline and the oppressive magic of the governor’s mages keep a fragile peace as colonists struggle against a hostile environment. But the supply ships from Dondareth have stopped coming, boding ill for the kingdom that banished the colonists.

Now, McFadden and the people of Velant decide their fate. They can remain in their icy prison, removed from the devastation of the outside world, but facing a subsistence-level existence, or they can return to the ruins of the kingdom that they once called home. Either way, destruction lies ahead...

You can read an excerpt from the novel, here.

Gail is also the author of the Chronicles of the Necromancer series (published by Solaris Books) and The Fallen Kings Cycle (also Orbit). For more information about Gail’s books and short stories, visit her website. Be sure to “Like” Gail’s Winter Kingdoms Facebook page, follow her on Twitter, and join her for frequent discussions on Goodreads. 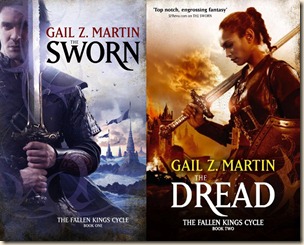 The Fallen Kings Cycle: The Sworn, The Dread

Posted by Civilian Reader at 6:32 AM