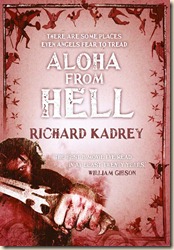 In Sandman Slim Stark came back from hell for revenge.

In Kill the Dead he tackled both a zombie plague and being Lucifer’s bodyguard.

And once again all is not right in L.A. Lucifer is back in Heaven, God’s on vacation, and an insane killer mounts a war against both Heaven and Hell.

Stark must head back down to his old stomping grounds to rescue his long-lost love, stop an insane serial killer, prevent both Good and Evil from completely destroying each other, and stop the demonic Kissi from ruining the party for everyone.

Even for Sandman Slim, that’s a tall order. And it’s only the beginning.

I’ve been catching up with Kadrey’s Sandman Slim novels, and I’ve been having a blast doing so. I love his visceral no-nonsense prose style, his just-on-the-right-side-of-anti-hero characters, and the stories themselves. Aloha From Hell, the third in the series, does not quite match the quality of the first two, but it is nevertheless one hell of a novel. [Yes, I went there. Deal with the punning!]

It is, as always, a little tricky to review third novels in a series: to go into too much detail will offer a ton of spoilers for books one and two, which you don’t want to do. To not go into any detail, will leave the review thin and perhaps worthless. (Or, more likely, similar to those 50-word reviews that spend half their time recounting the plot before tacking “Good” or “Bad” sentiments on the end…)

Aloha From Hell continues the story of our reluctant hero. This time, he is still facing off against forces of evil and struggling with his past. Exorcism and sin-eating play a bigger part in this novel, however, and I really liked the way Kadrey has portrayed and utilized these particular practices. A kid, Hunter, has been dabbling with a new drug called “Akira”, which is meant to increase anyone’s psychic abilities – it works for Sub Rosa, the underground supernatural community, as well as run-of-the-mill humans. It is, of course, also very dangerous as a result: opening your mind means sometimes things can try, and succeed, to get back in there with you…

Stark is cajoled into helping Hunter’s parents rescue their son, and over the course of their investigation, we learn that there is a lot more going on, and some of the strange hoodoo is not at all a coincidence. To help them out with the exorcism, Kadrey and his band of supernatural misfits seek out a priest, and join forces with a defrocked member of the clergy.

“I’m not a priest anymore, so there’s no need to call me ‘Father.’ Liam works just fine.”

“I’ll stick with ‘Father,’” I say. “I heard every time you call an excommunicated priest ‘Father,’ an angel gets hemorrhoids.”

Looking ahead, I believe Liam and his research (what got him booted from the Church) will play a part in future novels, too.

Stark’s relationship with Candy, the Jade (a type of vampire) who for a long time was a companion and assistant to his father (which we discover near the end of Kill the Dead), is developing rather well. They are both monstrous in their own way, and are able to both keep each other in check (to a point) and also accept their less-than-human aspects. Nevertheless, Alice, Stark’s dead pre-Hell lover, is still very much on his mind, and intruding on his dreams. She is, after all, the reason he clawed his way back from Hell in the first place. In Aloha From Hell, we get a little more background on their relationship and her past, which may help him move on as the series goes forward (there are already a novella and fourth novel published, with the fifth, Kill City Blues, to be published in 2013).

Despite Mason Faim’s central role in Sandman Slim, we didn’t learn a huge amount about him in that first novel. Aloha From Hell remedies this oversight, and we are treated to a good deal more about Mason’s past, his family and also the Sub Rosa drug trade, which the Faims were intimately connected to. Apparently, they made their money from the drug trade, controlling lots of California’s illicit substance economy. The family moved to Burma for a short while, but was attacked and butchered by local Sub Rosa shamans, after which Mason (who witnessed the slaughter) went missing for a couple of years in the jungle. Aloha From Hell brings the Stark-Mason story to a violent, bloody and over-the-top conclusion, which should satisfy readers who have been looking forward to this moment.

Kadrey’s novel is once again filled with witty and snarky asides; social commentary, and also a grimy love-letter to Los Angeles, in its way. There was an amusing moment in particular, when Stark goes through his collection of trophies and souvenirs, which managed to tap into Buffy and education policy:

“My favorite is a silver stake made by a wannabe high school vampire slayer. She made it by sharpening a flat-head screwdriver and dipping it in a pot of melted dimes. The perfect weapon against shroud eaters. Only the little idiot didn’t know that modern dimes are mostly copper covered in nickel. All she did was ruin a perfectly good screwdriver and prove the L.A. schools truly suck.”

As the title suggests, the story eventually moves to Hell. And here the story lost a bit of steam. Kadrey’s brilliant, twisted imagination is still on full display, and the Hell he evokes is suitably… uh, hellish. It’s brutal, twisty, filled with hazards, and at the moment has gone completely bonkers as the Hellion factions try to decide whose side they are on, what’s actually going on, and how to proceed with their upcoming war with Heaven. Despite this madness of events, however, the novel’s pace dropped a bit. I think Kadrey perhaps allowed himself a little more self-indulgence than usual. It seems he really wanted to inform the reader just how fucked up Hell has become. Not strictly speaking a bad thing, but it was noticeably not as tight as the first half of the novel.

Overall, this is a very strong novel. We’re getting more character development, more world-building, and plenty of visceral, exhilarating story. Kadrey’s prose will still pull you through the story, working their literary hooks into your mind and blackened soul. It’s visceral, bloody, and in-your-face. It’s great fun. And I really enjoyed how he’s used supernatural elements and reimagined a few of them.

I will happily and eagerly read every book Kadrey publishes in this series. I also hope to catch up on some of his other works (first up will be Butcher Bird).