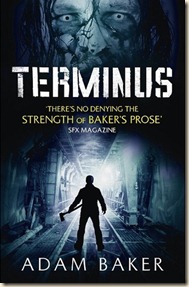 I heard about Adam Baker’s third novel, Terminus back in August, when I met Anne and Francine from Hodder UK at a Pandemonium event in London. Ever since, I’ve been eagerly keeping my eye out for more information. Baker is one of those authors who, despite writing the type of novel I should be interested in, I have never actually read.

Terminus will be published by Hodder in March 2013. (I was unable to dig up any details about a US or worldwide release, but I’ll keep you posted as and when more information becomes available.)

Posted by Civilian Reader at 7:31 AM