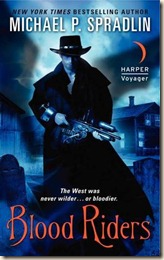 Following on from yesterday’s interview with Michael Spradlin, today I bring you an excerpt from his latest Wild Western Fantasy, Blood Riders.

It wasn’t right, that’s all Hollister could tell himself. Three hundred yards away two wagons were overturned and smoldering with arrow riddled bodies strewn about. Not far away from the still smoking campfire, a horse lay dead in the dust. He couldn’t tell if the dead people had been shot or scalped from this distance, but something was wrong.

Lakota Raiders would go to any lengths to avoid killing a horse. An animal they could use.

And there were no birds.

It was just before dawn and in the low light the camp looked like it had been attacked a while ago. Buzzards should be everywhere, but there wasn’t a one in sight. Hollister returned the small spyglass to his saddlebag and raised himself up in his stirrups to stretch. He and his eleven troopers had been riding patrol for nearly forty-eight hours with little rest.

Three days ago, a young girl had wandered into Camp Sturgis, not far from Deadwood in the western South Dakota Territory. She was delirious and nearly dead. She had cried and screamed and wailed nonsense, until she finally fell into a deep, exhaustive sleep, in which the Regimental Surgeon told the Colonel she had fretted over “blood devils.”

The Colonel sent McAllister into Deadwood to ask around and he’d learned a party of settlers had left Deadwood, a few days before the girl stumbled into the fort. They were heading west, toward Devil’s Tower over in Wyoming Territory. Some of the town folks remembered a young girl about nine or ten years old had been with them. Maybe it was this girl, maybe it wasn’t. No one could say for sure. No one remembered their exact destination either; Deadwood was booming after all, wagons and people were moving in and out all the time. So the Colonel told Hollister to pick a Sergeant and take a platoon and check it out. And it seemed they’d found what they were looking for.

“Cap’n?” he heard Sergeant Lemaire ask him. Lemaire had silently ridden his horse right up next to Hollister without him noticing. The man moved like a ghost, one of the reasons Hollister had assigned him to his company.

“Shouldn’t we see to them, Sir?” Lemaire asked.

“Yes, Sergeant, I suppose we should.”

“Is there something wrong, Cap’n?” Lemaire swiveled in the saddle to look at Hollister.

“Can’t say for sure, Sergeant. But yes, something feels wrong,” Hollister replied. He drew his Colt from his holster, snapped open the cylinder and checked the load.

Hollister let out a long, slow breath and stared down at the ruined camp. His heart was pounding. In truth, every instinct was telling him to turn his horse, and ride hell-bent for Camp Sturgis without looking back.

“Tell the men to advance carbines. You ride with me toward the center of the camp. Tell Corporal Rogg to take the left with four men and, have Private…what’s the new kid’s…name…Hawkins?”

“Harker. He’s green, but seems steady. Have him take the other four and approach the camp from the right.”

“Begging the Cap'ns pardon, Sir. But…”

“I know Sergeant. I just got a feeling. Something isn’t right down there. Tell the men to stay sharp. Order them to wait until you and I start forward before moving out.”

It was getting lighter. No sun yet but yellow and red had started to fill the eastern sky. The wind picked up. Hollister didn’t usually believe in what his mother had always referred to as ‘blasphemous nonsense’, but for just an instant he thought the wind sometimes carries whispers; a quiet moaning, like a lost soul crying out for mercy. Hollister shuddered; worried he was losing his mind.

He heard the men advance carbines and the squeak of leather as the platoon spurred their horses, moving along the ridge and into position. He checked his load again rolling the cylinder along the blue sleeve of his cavalry blouse, and snapped it shut.

“Ready, Sir,” the Sergeant reported. He didn’t wait for the Captain, but spurred his horse and trotted gently down the slope toward the camp. Lemaire knew Hollister was no shave-tail. If he said be careful, careful Lemaire would be.

The prairie grass was burned off to knee height in the late, dry summer. If it were spring when the rains came, the grass would have been ten to twelve feet tall and an entire company of soldiers could have ridden past this camp a dozen times and never even noticed it, if not for the smoke.

No one made a sound as the men approached the camp. Hollister hadn’t spotted any movement but he knew the Lakota wouldn’t leave anyone alive. How the girl had managed to escape was a mystery. Perhaps she’d been able to hide somehow. But whatever happened here, it was clear the girl had witnessed it. And what’d she’d seen had been two counties past horrible.

Lemaire and Hollister reined up at the edge of the camp, not far from one of the overturned wagons. He spotted another thing that bothered him. The two wagons had been tipped over, and a few articles of clothing scattered about, but most of the supplies and tools were still lashed to the side of it. Didn’t make sense. A Lakota raiding party would have torn through everything looking for food, whiskey ammunition, and anything of value. Something must have spooked them. But what? And they weren’t fully burned. Just smoldering. Almost like someone wanted them to be spotted. And the one wagon that still remained upright. Jonas couldn’t get a handle on it. Nothing added up.

He looked closely at the two arrows protruding from the nearest body, a woman who lay sprawled face down in the dirt, about ten yards away. Even in the dim light of pre-dawn he recognized the markings on the shaft, definitely Lakota arrows. The woman had been shot in the lower back and in the leg. And from where he stood he still couldn’t tell if she’d been scalped. But the arrows hadn’t killed her unless she had bled to death from the wounds.

Every instinct in Hollister’s mind and body was telling him to pull back. To run. The wind howled louder and in his imagination he thought it called out a warning to him. He stepped slowly and gently toward the woman, kneeling when he reached her side. She wasn’t breathing and there was a dark red stain where her face lay buried in the grass and dirt.

“Yasser,” the Sergeant replied. “Looks like all of them are, Sir.”

“Instruct the men to surround the camp. Tell them to keep a sharp eye out. If this is Lakota work, it could be Fool’s Elk and his bunch. Wouldn’t be the first time he’d tried to ambush a rescue party. You and I will check the victims.”

“Yasser!” Lemaire shouted out orders. Hollister studied the bodies. It would be sunrise in a few minutes and the thought of sunlight made Hollister feel safer for a reason he couldn’t identify. He stood, making toward the center of the camp, near the fire where another body lay. This one was a young man, maybe late teens or early twenties. He wore wool pants and a white poplin shirt, with black suspenders. Like the woman, he was face down, a single arrow sticking out of his back. Again as with the woman, most of the shaft remained sticking out of his body. It hadn't gone in deep enough to kill him, and there were no signs of gunshot wounds. But he had the same dark red stain, seeping into the grass and dirt near his face. And he still had his hair.

Hollister started thinking maybe it wasn’t Lakota at all who had done this. It might have been somebody else trying to make it look like a Lakota raiding party. Ever since gold had been found in the Black Hills, hordes of men had rushed in and there weren’t enough legitimate claims to go around. Some just packed up and went home. Some turned to thieving. A few did worse.

Hollister looked to the east. The sky was getting lighter. He counted six dead on the ground, plus the girl who had staggered into the fort. And who knew how many captives had been hauled off if it was Lakota? Two of the wagons tipped over and semi-burned, but the one wagon was still upright and Hollister could not let it go. Why not burn the third wagon? Who ever did this took the horses or cut them loose, but why leave a perfectly good Conestoga for someone to scavenge?

Hollister couldn’t really blame the Lakota for being angry. They’d been promised this land forever and had been lied to every day for the past forty years. You push a man far enough he either breaks or he starts pushing back. The Lakota were far from broken. So why leave a perfectly good wagon for some other white person to come along to use to tear up more of their land with cattle and plows? Why, indeed?

“No, Sir. All dead, Sir.” Lemaire replied. Hollister waited, hoping and praying for Lemaire to speak, to confirm his suspicions and recommend leaving immediately. But if the Sergeant noticed anything, he didn’t say it.

Hollister was about to order the Sergeant to begin a burial detail, when he noticed movement out of the corner of his right eye. His four troopers were spread out, dismounted and grasping the reins of their horses. Each man held his carbine at port arms and stood with their backs to him, following his orders to keep an eye on the horizon.

But the ambush didn’t come from the horizon. It came from inside the camp.