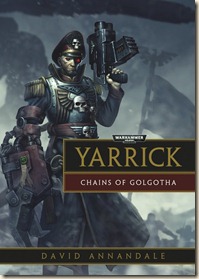 Was just on Black Library’s website, and this moody cover really caught my eye. It’s for David Annandale’s upcoming novella, featuring on of the Imperial Guards’ most famous heroes, Commissar Yarrick.

From the ashes of the Second War of Armageddon a hero of the Imperium emerged. War-torn and bloody, Commissar Yarrick swore vengeance on the beast that escaped his righteous wrath, the despoiler of Armageddon – Ghazghkull Thraka. Tracking down the ork warlord to the desolate world of Golgotha, Yarrick leads an armoured company to destroy the beast but does not reckon on Thraka’s cunning. Ambushed, his army all-but destroyed, Yarrick is captured and awakes to find himself aboard the beast's space hulk facing a fate worse than death...

Yarrick: Chains of Golgotha will be published later this month as a limited edition hardcover and also eBook. I’ve enjoyed Annandale’s BL fiction to date, so I am definitely looking forward to this.

I really like the fact that the publisher has been working hard to get stories out featuring some of the best-known characters, fleshing them out even more.