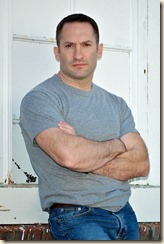 A little while back, I posted an open invitation to any writers, publishers, and bloggers who might want to write for Civilian-Reader’s first (of hopefully many) guest post series “Influences & Inspirations”. The idea was to allow them the opportunity to write about the books, series, and authors who inspired them to read and write.

There has been some great interest in the question (so keep an eye out for more posts, coming soon), and I am happy to bring you the first offering, from author MYKE COLE, who’s debut novel – Control Point – will be published in February 2012. So, without further ado, I shall pass things over to Myke…

It’s an easy answer: Peter V. Brett’s Demon Cycle, currently consisting of The Warded Man (or The Painted Man in the UK) and The Desert Spear, with The Daylight War soon to come. 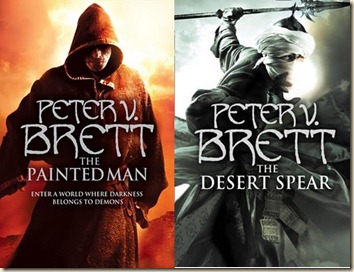 Pete and I have been friends since high school, when I sang in a battle of the bands that he hosted (I was not always the fine figure of a military officer you see before you, I used to have hair down to my ass and thought that White Lion was a pretty good act to follow. Ugh, I can’t believe I just typed that).

By complete coincidence, Pete and I wound up going to college together, and played regular games of Dungeons and Dragons. I don’t think either of us recognized it at the time, but we both began seriously honing our writing craft in planning for those games. Pete’s campaigns were incredibly well thought out. The focus was never on levelling up or hoarding magic items. I used to whine all the time about how I’d never get to hack and slash as much as I wanted. He would write incredibly detailed backstories for wandering monsters, and then I’d charge into a room and just kill them. But in spite of all my whinging about not getting enough XP, I found myself paying the same attention to plot and story arc when it was my turn to DM. In retrospect, I realize that it was because well written campaigns were, after all, a lot more fun than just wandering around fighting stuff. I guess (though I’d never admit it at the time) I realized it even then.

After college, we traded manuscripts and encouraged one another to write. I went the short story route, (figuring I’d get into novels once I had sufficient short story credits), while Pete dove straight into his novel writing craft. A decade later, big surprise, his novel writing was stellar while mine was still coming along. Once again, as with D&D, Pete took on the mentor role.

At the time, I was heavily influenced by the elegiac poetry-prose of China Mieville. Mieville’s work haunted and moved me, and I figured that was simply the gold standard for what good writing was. The problem is that I’m not China Mieville and I never will be. My life experiences (war-fighting, law enforcement, an adrenaline jacked personality pumped by athletic pursuit) ran counter to that florid, thoughtful style. I had gotten a major agent interested in my work, but he kept rejecting my manuscripts. I couldn’t figure out why my stuff wasn’t working.

And then Pete sent me the manuscript for The Warded Man that went on to sell to Del Rey. What I began to see in those pages (and through literally thousands more pages of emails and hours of phone conversations with Pete that followed) was a different way. Pete favored a clipped narrative style. Where Mieville was fecund, Pete pruned viciously. He never described a thing that he assumed that reader already knew (a medieval house, a horse, a spear). He never used an unusual word where a more common one would do. He clipped and cut until his manuscript bled, and then he went back and did it again. And again. He examined every word, ensuring that his “mules hauled wood,” that every element of prose served either to develop character or further the plot. There were absolutely no flights of fancy. 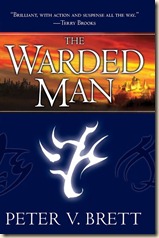 I was convinced that economy of prose, that minimalism, would rob a work of fantasy of the resonance and wonder that made it worth reading. I was wrong. Pete’s manuscript was a page turner. It had achieved that holy grail of novel characteristics – “unputdownable.”

I became a student of this style, and found it fit my character (and thus my characters) much better. It felt natural, easy. Even better, I began to riff on it, twist it to my own ends, depart from Pete’s orthodoxies, developing my own voice from that bedrock. Where I’d slavishly imitated Mieville, I used Pete’s styling to develop a voice authentic to myself. I seasoned it with my life experiences, my interest in the military, and yes, I even tipped my cap to Mieville a few times.

And sure enough, I got home from my third tour overseas to discover that agent finally wanted to represent me. The manuscript he signed me for became Control Point, which will be the first of my Shadow Ops series published by Ace in February, 2012.

Pete has said before that “there’s a lot of Myke in The Warded Man and there’s a lot of me in Control Point.” I have developed a style that I hope will resonate with readers. Its foundation will always be firmly rooted in my friendship with Pete, and the years and piles of exchanged pages that followed. Thanks are due to Pete and China both.

Huge thank you to Myke for being the first to write for this topic. Don’t forget to check out Myke’s website, Facebook and Twitter, for more news and information about his upcoming series.

[Also, check back in a couple of weeks – August 17th – for an interview with Myke.]

One final bonus, here’s the cool artwork for Control Point: 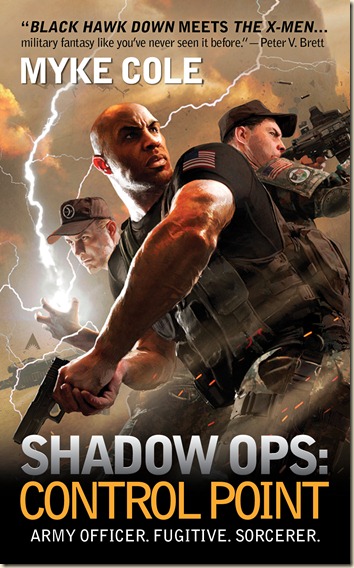