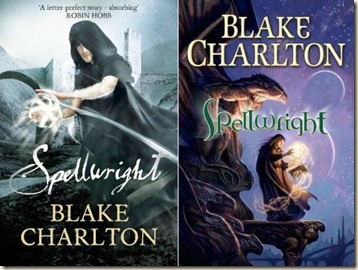 One of the most hotly-anticipated fantasy debuts of 2010

In a world where words can come to life, an inability to spell can be a dangerous thing…

No one knows this better than apprentice wizard Nicodemus Weal. Nicodemus is a cacographer, unable to reproduce even simple magical texts without ‘misspelling’, a mistake that can have deadly consequences. He was supposed to be the Halcyon, a magic-user of unsurpassed power, destined to save the world. Instead, he is restricted to menial tasks, and mocked for his failure to live up to the prophecy.

But not everyone interprets prophecy in the same way. There are some factions who believe a cacographer such as Nicodemus could hold great power – power that might be used as easily for evil as for good. And when two of the wizards closest to Nicodemus are found dead, it becomes clear that some of those factions will stop at nothing to find the apprentice and bend him to their will.

There’s no doubt that anticipation for Spellwright has been running high for months – in a half-year that seems dominated by hotly-tipped fantasy debuts, Blake Charlton’s novel would need to be particularly good to stand out from an already crowded field of new genre upstarts. Thankfully, on the basis of its wholly original (as far as I’m aware) magic system, Spellwright does indeed deserve your attention.

Taking a lot of classic themes that have been key elements of fantasy for decades (if not longer, when including myths and legends), and coupling them with an obvious love for and fascination with language, Charlton has managed to avoid pitfalls and cliché. Nicodemus is at a magic school, has a mysterious mark that may or may not mean something important (a keloid scar), a ‘disability’ that holds him back (something he must overcome to assume his true potential), and a plethora of other fantasy classics: dragons, gargoyles, magic tomes, and a mysterious killer stalking our protagonist. There is a shade of Harry Potter in here, but don’t take this to mean Spellwright is the same – this is very different, and wholly Charlton’s own wonderful creation.

To write about this book without looking at the magic system would be folly – even if it might seem clichéd or over-done to anyone who has read other reviews: it is so integral to the story and plot, that to gloss over it would leave the reader wholly unprepared for the story they are about to read. The magic in Charlton’s world is based around language and a magician’s literacy in the main magical languages: Magnus and Numinous being the main two ‘higher’ languages (there are more, but these two crop up the most), as well as the mythical ‘Language Prime’ – believed to have been used by the Creator. Charlton’s magic system is not only highly original and interesting, but also very well written – there was always the possibility that a description of any complex or new system would be turgid and boring. Charlton manages to use the setting of a magic school to great effect, giving us more explanation as and when we need it, sprinkled throughout the novel, without making it feel like we’re about to receive an annoying or clunky ‘info-dump’. The way the magic can be used to form constructs is inspired, and adds additional flavour to the world Nicodemus inhabits. [The US cover actually incorporated this better than the UK artwork, and Charlton’s thoughts on that can be found here.]

I found myself sinking into the story easily and pretty much immediately whenever I picked up the book (sadly, life intruded on my reading this in more-or-less one go). Short chapters, coupled with the author’s clipped prose and realistic, believable dialogue make this a quick read. All of his characters are engaging and well-crafted (although I must admit to not initially liking the inclusion of Devin and Simple John). If there is one thing I would pick up on, it’s Nicodemus himself: he has a tendency to over-emote at times, which is confusing as he’s meant to be an adult, so his naïveté is not always understandable or welcome. This is, however, mostly forgivable, given his condition and relative youth compared to the other wizards that feature in the story (his mentor, Shannon, is about 200 years old, for example). In the next novel in the series, Spellbound, I’m sure most of this will have been ironed out.

The story is revealed at a gradual, well-timed pace, without clunky info-dumps, unveiling more and more about the factions and players, the politics and nations involved. The author’s style is great at dragging the reader along, making it difficult to put Spellwright down, and most chapters end on a hook that will force you to read “just one more” (although we know how that always goes). Charlton’s interest and enthusiasm for language itself is inherent throughout the novel, and his obvious enjoyment in writing the book is passed on to the reader.

Different to the more ‘gritty’ fantasy authors currently writing today (think Abercrombie, Sykes, Newton, Morgan and so forth), this book doesn’t veer into graphic violence or other themes that might make some readers uncomfortable; Spellwright is far more classic in feel.

Highly original and an absolute pleasure to read, Spellwright comes very highly recommended. This is a wonderful work of fantasy escapism and world-building.

Posted by Civilian Reader at 5:44 PM