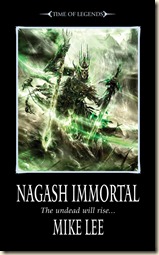 The undead will rise…

In the tunnels of Nagashizzar, a new threat to the realm of the undead is rising. Nagash must call upon all his reserves of power to defeat the skaven assault and continue his unholy reign. But when Nagash realises he can use his enemy for his own nefarious needs, an uneasy alliance is struck and a vast, nightmarish army is formed. The necromancer launched his final attack on the lands of Nehekhara, sweeping all before him.

Only one man dare stand in his way – Alcadizzar, a peerless warrior and leader of a defiant force. Their confrontation will not just decide the fate of Nehekhara, but of all the Old World.

Nagash Immortal by Mike Lee continues the popular Time of Legends series from Black Library, and it does not disappoint. If you, like me, are into your lore and background then the story Lee has told will certainly appeal to you. On top of a historical tale you also get a wealth of great characters and incredibly detailed writing that fleshes out an area of the Old World few have ventured too before from the Black Library. The simultaneous unfolding tales of Alcadizzar, Nagash, and the skaven duo Eekrit and Eshreegar are seamlessly interwoven until you have a mysterious narrative charting not a few months, but decades of history.

The timeline and scope of the novel is something that immediately hit me. Where many novels simply deal with an event unfolding over a couple of months, Nagash Immortal has the interesting and perhaps daunting prospect of having to play out the life of the undead. While some would consider that an impossible challenge, fitting decades of history into six hundred pages, Lee has managed to condense the events down to the key moments in Nagash’s un-life while also, through the eyes of others, showing the changing state of a land filled with exotic life. You really get a sense of the changing state of affairs between the peoples of Khemri, from the day-to-day life of city dwellers to the Arabian Nights-lifestyle of the nomadic horsemen.

The strength of this twisting narrative, flitting from one perspective to the next, blooms throughout at least the first three quarters of the novel as you watch the young Alcadizzar learn from his masters, experience betrayal and horror and then rise to become the king he always wanted to be. The same can be said for the evil machinations of the skaven duo Eekrit and Eshreegar. I always love reading about the skaven in Warhammer Fantasy, since their society is fraught with back-stabbing and intrigue, and this novel is no exception. It’s incredibly fun getting drawn into the political games they play, especially with a later character, Velsquee, who really makes you support them as a pair and hope they get one over on him. The same can be said for Nagash himself, an interesting character and no mistake. After his previous exploits, it’s great to see the decaying twilight of his years in the Old World and you really get a sense of his struggle to maintain his immortal form. He carries no surprises in his character though; he is evil and does what evil does best.

However, as I mentioned above, the last quarter of the novel falters a bit as it tries to tie up all the loose ends. After the rise to fame of Alcadizzar and his battles against Nagash and the immortals of Lahmia, the ending seems to have been crammed together. It’s by no means a bad ending and is incredibly heart-breaking to see Alcadizzar’s fall into madness, but it flashes by in the blink of an eye as Lee races to get to that fateful duel between Alcadizzar and Nagash that many a Warhammer fan will know of.

One thing I have only briefly mentioned above is the other perspective that we get tied into the story of Nagash. The immortals who not only entice but then become the enemies of Alcadizzar in the first half of the book are the characters keeping this story firmly in the realms of Warhammer. Nagash is terrifyingly evil yes, but he never exudes a sense of horror about him. Alcadizzar himself is also brilliantly written, but said his story is much more a tale of Arabian Nights than Old World terror. It is when the immortals, a court of vampires, come into play that you really felt that this story is set in a world of everlasting war and horror. As most Warhammer fans will know, the immortals of Lahmia were the progenitors of the vampires in the Old World, and it’s fantastic to see every side of the vampire caste represented. You get to really feel the Blood Dragons in the battle scenes, the Necrarch with their love of magic and experimentation. Lahmians and Strigoi also feature, and it’s a testament to Lee’s skills as a storyteller that he managed to get all this information and back story into the novel.

It would be remiss of me to talk about a Black Library Warhammer book without discussing the battle scenes, of which there are many. From the smaller skirmishes to the epic battles against Nagash in the second half of the novel, Lee does a masterful job of making you feel every blow and drop of blood. Even seemingly minor characters get their moments in the lime light through battles and you can really feel the ebb and flow of war as it happens. It’s sometimes hard to get not only the private fights of individuals but the whole nature of a battle in words, but Lee manages it. Only at one moment was I a bit lost as to what was happening in a battle and had to re-read a few pages in order to work out where people were and who had died and lived.

Another moment of small confusion comes with the names in the novel. The names are so incredibly crazy compared to most novels in the Warhammer world that you actually forget who people are at times. This isn’t helped by the switching of perspectives which can also confuse you even more. Thankfully, Lee thought to put a Dramatis Personae list at the beginning of the book, but even then it’s a little irritating having to flick back and stop your reading to work out who is talking. But, a minor problem.

There are also a few nuggets of fun for fans of the Warhammer world in the book. It came as a surprise to me when I read it, but in the first moments where you meet Alcadizzar he is playing (or learning) a table top battlefield. I thought it was a fantastic nod to the war gamers of Games Workshop and will give you a little smirk when you read it. Lee also managed to satisfy fans of the Tomb Kings army when he references Queen Khalida, and while her appearance is brief at the end of the novel it’s a great one.

It was great fun reading Nagash Immortal. You’re effectively getting almost four stories for the price of one. If you love the macabre, then the time spent in Lahmia will be great. If you’re a fan of the undead and necromancy, then Nagash will get your blood boiling and enjoying his magic machinations. If you love a bit of backstabbing and treachery, then the skaven perspective will appeal to you. But the real star of this book is Alcadizzar. His rise is both sad and epic in quality, and he will soon become the focus of your attention as you read. With two previous books that focused more on Nagash, it was a good move to look to another character to hold the book aloft, while having Nagash as this nagging threat at the back of your mind throughout.