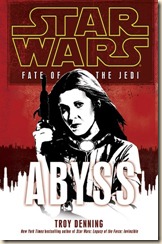 With the paperback release of Troy Denning’s Fate of the Jedi: Abyss, I thought I’d just post a quick link to my earlier review, rather than post the whole thing again. With a slightly darker feel to it, Abyss is a good addition to the Fate of the Jedi series, with the Lost Tribe of the Sith playing a bigger part in the plot and Vestara (an integral character in both Backlash and Allies) starts to feature more. Here’s the synopsis of the novel:

Luke and Ben Skywalker arrive in the mysterious part of space called The Maw in search of more clues as to what caused Jacen Solo’s downfall into the dark side.

They are not, however, the only ones exploring The Maw: a Sith Master and her apprentice arrive there, too, having followed the delinquent ancient Sith ship found by Ben in The Legacy of the Force – and they’re thrilled to find Luke there, because they are determined to kill him.

But there’s another powerful being hiding in The Maw. It's enormously strong, purely evil, and it has its own plans for Luke Skywalker...

As just a taste of what I thought the first time around, here are a couple of paragraphs from the review with my overall impressions of the novel:

“Denning’s prose are fluid and tightly-written, the plotting is very fast-paced (I read this book very quickly indeed), with a healthy balance between action, occasional wit, and ever-more detail of the Star Wars universe and those who inhabit it. I would have preferred if the plot and series as a whole were more focused on Luke and Ben’s journey, as I believe all three writers for this series have managed to create and maintain an interesting dynamic between father and son hitherto unexplored in much detail. It’s clear that Ben is going to be a major (if not the major) character in the future, so it would make sense to develop him further…”

“Sci-fi action in the classic style we’ve come to love and expect from the Star Wars brand, mixed with a greater attention to the political and philosophical (though without becoming pretentious or Trek-y)…”

So, if you’d like to read the rest of the review, you can find it here.

Posted by Civilian Reader at 12:35 PM