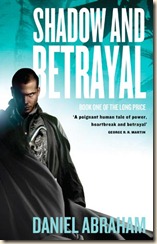 The Long Price Quartet: Epic Fantasy at its best?

In a remote mountain academy, the politically expendable younger sons of the Great Houses study for an extraordinary task. Most will fail, some will die, but the reward for the dedicated few is great: mastery of the andat, and the rank of Poet.

Thanks to these men – part sorcerers, part scholars – the great city-states of the Khaiem enjoy wealth and power beyond measure, and the greatest of them all is Saraykeht: glittering jewel of the Summer Cities.

There are those in the world, however, who envy such wealth. There are great riches to be had in the Summer and Winter Cities, and only the threat of the andat unleashed holds the enemies of the Khaiem in check. Conflict is brewing in the world. Alliances will be broken and friends betrayed. The lowly will be raised up, the mighty will fall and innocents will be slaughtered. And two men, bound to each other by an act of kindness and an act of brutality, may be all that stands between the civilised world and war. War and something worse... 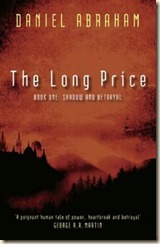 Daniel Abraham’s The Long Price Quarter is a truly impressive,  epic undertaking. Shadow & Betrayal contains the first two novels that make up the quartet: A Shadow In Summer and A Betrayal In Winter.

The first novel suffers a little bit from first-fantasy-novel syndrome – i.e., there’s a fair amount of world-building going on that slows the flow of an already mid-paced novel. This is, however, no bad thing: the world Abraham has created is brilliant, and there’s a great attention to detail throughout, which means the reader should never feel ‘lost’ while reading. The synopsis above is actually just the first-novel’s synopsis – this is a weakness of including two novels in one volume: if you explain what happens in the second book, then you run the risk of spoiling the first 300 pages. However, that’s not always the case, so here is a truncated synopsis of A Betrayal in Winter:

As a boy, Otah Machi was exiled from his family, Machi’s ruling house. Decades later, he has witnessed and been part of world-changing events. Yet he has never returned to Machi. Now his father — the Khai, or ruler, of Machi — is dying and his eldest brother Biitrah has been assassinated. Otah realizes that he must return to Machi, for reasons not even he understands.

Tradition dictates that the sons of a dying Khai fall upon each other until only one remains to succeed his father. But something even worse is occurring in Machi. The Galts, an expansive empire, have allied with someone in the city’s aristocracy to bring down the ruling house. Otah is accused, the long-lost brother believed dead, with an all-too-obvious motive for murder. Meanwhile Maati, his friend from A Shadow in Summer, is on a mission to Machi from the Dai-kvo, the most powerful man alive, and head poet.

The second book is superior to the first, but mainly because we are now familiar with the world, so more attention can be paid to the story, politics and intrigue of the novel. But, there is something about Abraham’s writing that is faster, tighter and just overall more satisfying. The plot is a little faster, too.

The main characters in these two novels are well-crafted and complex, suffering all of humanity’s vices and flaws, but also plenty of strengths too. The relationships that form between the main characters – Otah, Maati and Liat in A Shadow In Summer, for example; and Maati and Cehmai, or Cehmai and Idaan in A Betrayal In Winter – are well written and believable, avoiding over-emoting and hyperbole. Every character is working to his or her own agenda and advantage, and the various layers of conspiracy all contribute to their actions, misinterpretations and subsequent reactions. The nature of the higher echelons of society is perfectly encapsulated by this short exchange between Amat and Wilsin – two of the main characters in A Shadow in Summer:

Amat: “What is this all about?”

Wilsin: “Money. Power. What else is there?”

Shadow & Betrayal has a lot going on within its pages, so I would definitely advise that you block out some proper time to start and read it – once you get into the story, it will become next-to-impossible to put it down. Unfortunately, I was unable to do this, so it took me longer than it perhaps should have to get to grips with the politics, world, characters and so forth. Needless to say, though, when I did I became completely immersed in the story, putting almost everything else on hold while I read it. Every day, I was kept awake well into the wee hours of the morning unable to put the book down, always wanting to read “just one more chapter”, which invariably became two or three more chapters. This is an addictive, immersive fantasy. If there are few books that justify the phrase “lost in a good book”, this is certainly one of them.

Abrahams has done an excellent job of creating a world distinct from our own, yet with elemental similarities – there’s no denying the Eastern influences throughout, for example. (Even Abraham’s descriptions of the weather were evocative: Saraykeht’s summer heat made me think of Japan’s oppressively muggy summers, for example.)

The Eastern/Oriental influence continues in other areas, including Abraham’s most intriguing creations: the andat. The andat are creatures crafted by the poets, bound thoughts and ideas, able to do incredible and miraculous things. In the first novel, Seedless (the andat of Saraykeht) is a mischievous, untrustworthy creature, twisting those around him for his own amusement and gain, playing protagonists and antagonists against each other – much the way demons and spirits do in Eastern mythology (and, it’s true, a lot of fantasy and sci-fi literature also). Stone-Made-Soft, the andat in the second novel, is a somewhat different creature with an opposite temperament. Maati, the young poet sent first to Saraykeht and then Machi, no longer has to deal with the “thousand-layered comments of Seedless” when around the andat of Machi, for he is more docile and taciturn, with a detached interest in humans and their interactions. (It was very hard not to become rather fond of the character, in fact.)

The brutal nature of the politics is conveyed expertly through the eyes of Abraham’s c haracters, those who have to live within it, those who merely watch from the sidelines, and those who get caught up in the bargains and power-plays. To go into any more detail would really give the game away, so I shall refrain from outlining story-points any further. The story throughout this volume is one of power struggles, heartbreak, manipulation, and greed – in other words, Abraham lays bear for us the core of human nature wrapped in an engrossing fantasy epic.

The original cover artwork (US): 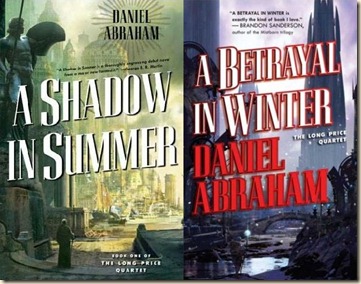 [I will review the second volume, Season of War, very soon.]
Posted by Civilian Reader at 11:39 PM