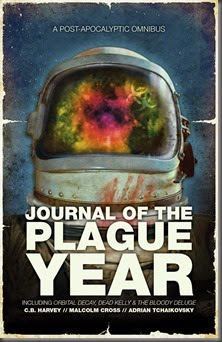 WHEN THE WORLD ENDED...

The Cull swept the world in the early years of the twenty-first century, killing billions and ending civilisation as we know it. Only a fortunate few, blessed with the right blood, were spared. But in times of need, heroes rise. Leaders, soldiers, rebels – even children – take a stand, to hold back the tide of savagery and set a light in the darkness…

Katy Lewkowitz and her friend and old tutor Dr. Emil Weber, fleeing the depredations of the so-called New Teutonic Order, take refuge among the strangely anachronistic survivors at the monastery of Jasna Góra in Western Poland. A battle of faith ensues, that could decide the future of humankind…

This is the first non-fantasy story of Tchaikovsky’s that I’ve read. It is also the first story I’ve read from Abaddon Books’ Afterblight series. With that in mind, I approached it concerned that I would be lost, missing important backstory and context for this post-apocalyptic world. However, I was very pleased to discover that this works perfectly well without past experience with the series. It’s very well-written, and moves at a pretty brisk pace. This is a good story.

Tchaikovsky’s characters are well-drawn and realistic, not to mention plenty of shades of grey. The role of religion in the story was interesting, and I liked the way the author showed how religious organisations could develop in multiple, conflicting ways when presented with the end of the world. Here, we have an Order that seems to feed of the worst historical characteristics of organised religion, fuelled and worsened by intolerance and bigotry. On the flip side, the group occupying Jasna Góra are far more accepting and focused on good works and charity.

There’s an interesting blend of historical/fantasy and post-apocalypse, here, which can be seen most clearly during the siege – bows and arrows from the walls compete against motorbike-mounted “knights” and a tank. Really enjoyed that about this story, the way the future and advancement of the human race came crashing to a halt in the wake of the Cull.

Speaking of bows, I think the only thing that didn’t work for me was Katy’s rather bizarre confusion, when she realised that the people at Jasna Góra used bows for fighting, and not just hunting. For a British-educated postgraduate, the idea that she would have been unaware of archers’ role in warfare was somewhat baffling.

Overall, then, this is not only a good new direction for Tchaikovsky, but also a good introduction (and, no doubt, continuation) of Abaddon Books’ Afterblight series.

It’s not as assured as Tchaikovsky’s Shadows of the Apt epic fantasy series (one that I am woefully behind on, but which comes to an end this year), and I think I preferred his writing and style in that series. Nevertheless, that should not discount The Bloody Deluge – it’s a solid example of post-apocalyptic fiction. If you’re a fan of the genre, then I think you’ll enjoy this, too.

You can read an interview with Adrian about this story, here.

The Bloody Deluge has been collected in the Journal of the Plague Year anthology. Here’s the synopsis for the other two stories therein:

Journal of the Plague Year offers three new tales from across the world of The Afterblight Chronicles, from the International Space Station to the wilds of the Australian Outback and beyond.

In Malcolm Cross’s Orbital Decay, the team in the Space Station watch helplessly as the world is all but wiped out. Exiled from Earth, astronaut Alvin Burrows must solve the mystery of the “Pandora” experiment, even as someone on the station takes to murdering the crew one by one.

In C. B. Harvey’s Dead Kelly, fugitive and convict Kelly McGuire returns to the lawless city of Melbourne to be revenged on his old gangmates, and, ultimately, to reveal his own terrible destiny.