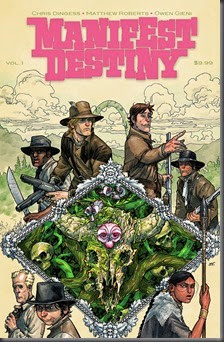 An interesting beginning to an alternate history series

In 1804, Captain Meriwether Lewis and Second Lieutenant William Clark set out from St. Louis, Missouri with the intent of blazing a trail to the western coast of North America – a trip that would set the foundation for the future of the United States of America.

In this imaginative retelling of their famous trek, Lewis and Clark embark on a secret mission under direct orders from President Thomas Jefferson.

They are going to do more than explore the wild frontier: they’re going to catalog exotic life and eliminate the monsters that stand in the way of the safe and rapid expansion of the United States.

As I’m sure I’ve mentioned on the blog before, I’m fascinated by American history, and particularly its early history. Not only that, I do rather like comics. This meant Manifest Destiny piqued my interest as soon as I read about it on the Image Comics’ website. I enjoyed this a lot and I think this is a great start to a new series.

The twist to Manifest Destiny is the idea that Lewis and Clark, while investigating the continental interior, came across a number of beasties and magical weirdness. And Dingess has written a great story to go along with that premise. Roberts’s artwork is great, too. The story moves pretty gently to begin with, but in the final couple of chapters the story really picks up – not to mention gets rather weird. Lewis and Clark do a great job of battling the strange, aggressive monsters they can swing a sword at, or shoot with a musket. At the same time, they have to contend with the troublesome crew, some of whom are along for the adventure as an alternative to harsh sentences.

Oh, and there are vegetative zombie-types, too. Which are genuinely creepy, and rather interestingly tied in to the idea of the spirit of the land. There is some gentle humour, some good action, and the beginnings of something that could grow into a pretty long-lasted series. I, for one, hope it does continue. I’ll be back for volume two.

If you have any interest in history, comics, a dash of weirdness, then Manifest Destiny will appeal. Definitely recommended. 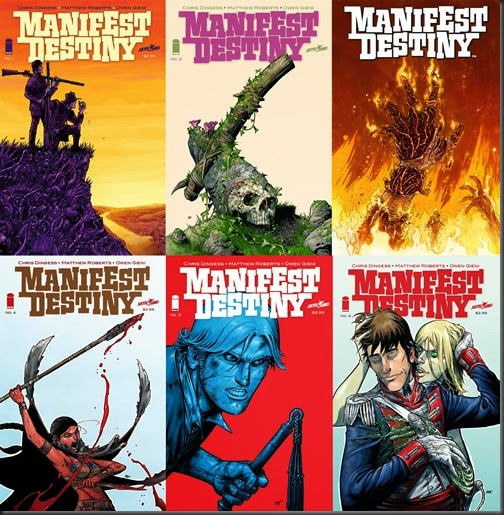 Posted by Civilian Reader at 9:14 PM