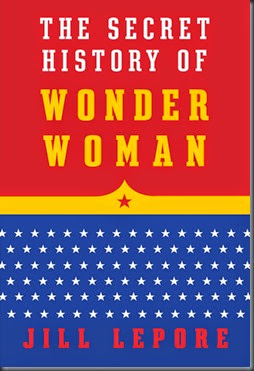 I am a huge fan of Jill Lepore’s writing – both long-form and also her journalism and shorter pieces. A professor of American History at Harvard University (and a staff writer at The New Yorker), Lepore has written extensively about history and how we interpret, teach, and read the history of the United States. Last year, I read the paperback edition of The Story of America, which was easily one of the best books I read in 2013. Perhaps of more interest to the readers of Civilian Reader, though, her upcoming work is about the fan-favourite Amazon warrior from the Justice League: Wonder Woman. Due to be published on October 28th, 2014 by Knopf. Here’s the rather long synopsis:

Wonder Woman, created in 1941, is the most popular female superhero of all time. Aside from Superman and Batman, no superhero has lasted as long or commanded so vast and wildly passionate a following. In the more than seven decades since she first appeared, her comic books have never been out of print. In years of interviews and archival research, Harvard historian and New Yorker staff writer Jill Lepore has uncovered an astonishing trove of documents, including the never-before-seen private papers of William Moulton Marston, Wonder Woman’s creator. Lepore has discovered that, from Marston’s days as a Harvard undergraduate, he was influenced by early suffragists and feminists, starting with the British suffragist Emmeline Pankhurst, who was banned from speaking on campus in 1911, when Marston was a freshman. In the 1920s, Marston and his wife brought into their home, as Marston’s mistress, the niece of Margaret Sanger, one of the most influential figures of the twentieth century. The Marston family story – a house of one man, three women, and four children-is a story of drama, intrigue, and irony. In the 1930s, Marston and Sanger’s niece together wrote a regular column for Family Circle celebrating conventional family life, even as they pursued a life of extraordinary nonconformity. No less fascinating is Marston’s role as the inventor of the lie detector. Internationally known as an expert on truth, he lived a life of secrets-only to spill them on the pages of the Wonder Woman comics he began writing in 1941.

The Secret History of Wonder Woman is a tour-de-force of intellectual and cultural history, explaining not only the mysterious origins of the world's most famous female superhero, but solving some of the most vexing puzzles in the American past. Wonder Woman, Lepore argues, is the missing link in the history of the struggle for women’s rights – a chain of events that begins with the women’s suffrage campaigns of the early 1900s and ends with the troubled place of feminism a century later.

Given how prominent the character has been in not only the comics and SFF communities (specifically the absence of plans for a Wonder Woman big-budget movie), but in pop-culture and gender studies communities, this is a very timely book. I’m really looking forward to this.