“You” by Austin Grossman (Mulholland Books) 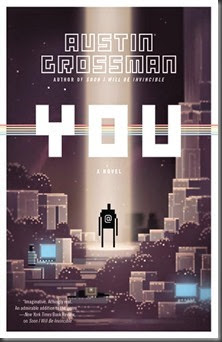 An interesting, engaging look at growing up and the evolution of the computer game

When Russell joins Black Arts games, brainchild of two visionary designers who were once his closest friends, he reunites with an eccentric crew of nerds hacking the frontiers of both technology and entertainment. In part, he’s finally given up chasing the conventional path that has always seemed just out of reach. But mostly, he needs to know what happened to Simon, his strangest and most gifted friend, who died under mysterious circumstances soon after Black Arts’ breakout hit.

As the company’s revolutionary next-gen game is threatened by a software glitch, Russell finds himself in a race to save his job, Black Arts’ legacy, and the people he has grown to care about. The deeper Russell digs, the more dangerous the glitch appears – and soon, Russell comes to realize there's much more is at stake than just one software company’s bottom line.

It took me a while to get around to reading You. I picked it up at the same time that I picked up Soon I Will Be Invincible, Grossman’s novel that preceded this one. I had tried to read that one when I was very much not in the mood. As a result, You was unfairly pushed back on my TBR pile. Then I read Myke Cole’s short review of the novel on Goodreads, I was convinced to read it. And I am very, very happy I did. This is a great novel.

I’ll get one thing out of the way rather quickly: You contains quite detailed information on the inner workings of the computer gaming industry. For me, this wasn’t wholly new information, but I don’t think it was overwhelming or boring. I didn’t follow everything, but this in no way reduced my enjoyment of the story. After all, the industry history and commentary was tied in with a much larger part of the story. Some of the comments about the gaming industry are pretty amusing, too. For example, this moment, when they’re discussing when to address a bug during the beta testing…

“Why wouldn’t you fix a bug if you knew about it?”

Matt sighed. “Okay. So Realms VI has on the order of a million lines of code. It’s not going to be perfect, but it has to be shipped. At some point the producer and the leads sit down and go through all the existing bugs and prioritize according to various subjective criteria. How often it happens. How bad it is – where the top end is, like, ‘Game crashes, hard drive is erased, user catches fire,’ and the low end is, ‘Yeah, the text in that Options menu could be a more eye-catching shade of blue.’ Fixability, i.e., how loudly and effectively are the people tasked with repairing it going to complain.”

The novel will undoubtedly hold evoke levels of nostalgia in readers, depending on their own histories with gaming, role playing and computer. If you have any interest in games (video, role-playing, pen-and-paper, etc.), and also fantasy and science fiction, then you will likely find a lot to enjoy here.

So. While the computer game industry is the framework, the story is actually about Russell’s quest to make a proper life for himself. At the start of the novel, he is lost, having bounced from one profession or college to another, never quite seeing things through to any sort of life. After applying for and getting a job at Black Arts, a company run by childhood friends, he embarks on a different kind of hero’s quest. You is a coming of age story, or a kind of coming-to-terms-with-life tale. He’s never known where he belongs, having done the dutiful thing, making the mature and “right” choices to go to college. Here’s how Russell compares the development of the game franchise to that of normal life…

As I thought of it, the First Age was like childhood, years of long-ago upheaval, trauma, and unbearable longing, during which our characters were formed.

The Second Age was high school. Battle lines were drawn, alliances hardened into place, strategies tested, scars acquired. The crimes committed in this Age would fester for millennia.

And the Third Age was everything after, when we went our separate ways and order was restored but nothing quite forgiven or forgotten. There was also a Fourth Age no one much bothered with, which marked the retreat of magic into mere legend and superstition and the ascendancy of humankind – i.e., the time when we grew up and got boring and our hearts, generally speaking, died.

There’s a mystery hidden through the Black Arts games, and it’s up to Russell to figure out the reason and also the solution. When we learn what is actually going on, it was a bit sudden and almost as if was of no real consequence. True, if things had gone wrong, then it probably would have been more consequential. What’s more important is the way Grossman offers the development of the gaming industry with the development of our character, and that of his friends. There are echoes of each in the other, and while the author never makes it explicit, I think it’s quite wonderfully done.

For the main, the characters are excellent, believable, and well-constructed. I think the only weakness in this area was the relationship between Russell and Darren, which I thought was underdeveloped. This was perhaps intentional, given the different type of character that Darren is. I thought Simon’s place in the story was very well done, though.

To offer one more vague, evasive statement: I think the final paragraph in the book was very good. A great ending to what was an engaging, thoughtful and very well-written novel. Is it perfect? No. Like even the best computer games, there were a couple of bugs. But it was still thoroughly enjoyable and even addictive. I never liked having to put this down for work or sleep.

I can’t wait to see what else Grossman is going to write, and I really do have to go back and try Soon I Will Be Invincible – considering how much I enjoyed this novel, hopefully any genre-frustrations I may be having at the moment won’t impact my enjoyment of that novel on a second try.