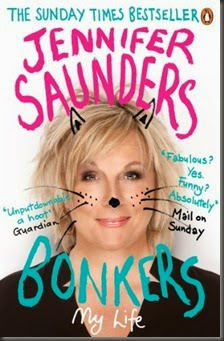 “As the steady march of time takes its toll on my memory and the vultures circle, I thought I should have a stab at recollecting how it all happened…”

Jennifer Saunders’s brilliant comic creations have brought joy to millions for three decades. From Comic Strip to Comic Relief, from Bolly-swilling Edina in Absolutely Fabulous to Meryl Streep in Mamma Mia, her characters are household names.

But it’s Jennifer herself who has a place in all our hearts. This is her funny, touching and disarmingly honest memoir, filled with stories of friends, laughter and occasional heartache – but never misery.

From her childhood on RAF bases, where her father was a pilot, to her life-changing encounter with a young Dawn French, on to success and family, the book charts her extraordinary story, including the slip ups and battles along the way.

I have been a fan of Saunders’s ever since I was a kid, and my father introduced me to Absolutely Fabulous. The series, which is excellent and everyone should watch, had a lasting impact on my family’s and my own lexicon. Countless times we have made comments to each other, instinctively knowing its origin. Hilarity ensues, strangers shuffle away. Anyway, I picked up Bonkers, and although it started off a little strangely, I thought it was a brilliant, honest, amusing memoir from one of Britain’s greatest comics.

Saunders takes us through her childhood and education in a something of a monotone, which was a little strange. She speaks with great affection about her parents and family life. I also really liked that she spoke of her tendencies to fantasise and daydream as a child and teenager. I did very much the same thing. After her story moves to her early years struggling as a comic and performer, though, things get far more interesting and amusing. We learn of how and where she met Dawn French, her long-time writing partner and friend. The stories about the early sets in a strip club, the first movie projects, the French & Saunders Show, and – most interestingly of all for me – Absolutely Fabulous. She also speaks of her battle with cancer (which I had no clue about until I listened to this), and her doomed movie project with Meg Ryan. And her amusing work on French projects, and the international stardom she gained from the cult following Absolutely Fabulous gained.

Before my recent bout of memoir reading, I had only ever read biographies about politicians and historically significant individuals (usually for work), so one of the great things about listening to memoirs of comedians is finding out the stories behind some of my favourite TV series and movies. Bonkers is not about dishing the dirt, and Saunders is honest and fair when discussing any difficult or strained relationship. She doesn’t point fingers, pass blame (not that there’s much of that needed), and she’s always respectful to those she’s worked with.

If you are a fan of Saunders’s comedy, then you really should read or listen to this. The audio book is excellently produced, and it was a real pleasure to listen to Saunders tell her story. Recommended.

Bonkers is published in audiobook by Audible, and in print and eBook by Viking.

Posted by Civilian Reader at 2:08 PM