Last September, I wrote a piece about how the movie Olympus Has Fallen bore some incredible similarities to Vince Flynn’s Transfer of Power. The piece was pretty short, but I also mentioned in it the fact that Flynn passed away in June 2013. It was also reported, through Flynn’s newsletter, that the planned next novel in the series, The Survivor, had been indefinitely suspended.

Since then, however, some very interesting news has arrived in my inbox! On June 22nd, Flynn’s Newsletter announced that “Mitch Rapp series will continue; The Survivor Tentatively Scheduled for 2015”!

As it turns out, one of my favourite thriller authors, Kyle Mills, has been selected to continue the series by Flynn’s estate and Emily Bestler, Senior VP and Editor-in-Chief of Emily Bestler Books. From the press release:

Mills will complete The Survivor, the book Flynn was writing at the time of his death on June 19, 2013, and then write two additional Mitch Rapp novels. The Survivor is tentatively scheduled to release in the fall of 2015.

“I’m really honored to have been asked to continue the Mitch Rapp series,” Mills said, “Vince was a great guy who helped me out in my career and as a diehard Rapp fan, I know how devastated his readers are. They’re big shoes to fill, but I’m looking forward to the challenge of continuing an iconic thriller character.”

“Vince and Mitch Rapp are so beloved by readers,” Bestler said, “It’s wonderful that we’ve found just the right partner to uphold the legacy of both.”

“To Vince’s wonderful fans, thank you for your love, support and patience,” Vince’s widow, Lysa Flynn said, “Vince was very proud of his team and we are confident that Kyle Mills will be a great addition. God bless and keep the faith!”

Mills is the author of the Mark Beamon thrillers and a handful of stand-alone thrillers. Most recently, he wrote The Immortalists (which, I am ashamed to admit, I have not read yet) and also The Ares Decision, The Utopia Experiment, and the upcoming The Von Neumann Machine – books 8, 10 and 1? of Tom Clancy’s Covert-One series. Many of Mills’s novels are very hard to find in the UK, which I think is a crime. It is also why it has always taken me a long time to get around to reading them – I discovered his novels well before CR was ever a thing. 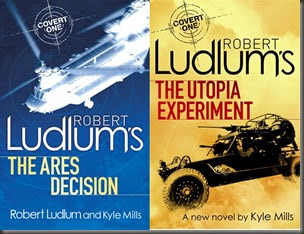 Posted by Civilian Reader at 9:36 PM