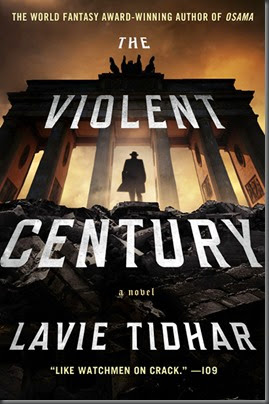 I am a big fan of Lavie Tidhar’s The Violent Century. Unusual and gripping, it is one of my favourite novels from last year. [Review.] Until recently, though, it was only available in the UK, published by Hodder and PS Publishing (limited edition). Now, though, Thomas Dunne Books/St. Martin’s Press will be releasing it in the US! It will be published in late February 2015. Mark your calendars!

There is that rather nice new cover, too – I like the way they kept the core elements of the UK cover (Brandenburg Gate, silhouetted fellow in trench-coat and hat, rubble in foreground), but also made it distinct.

For seventy years they guarded the British Empire. Oblivion and Fogg, inseparable friends, bound together by a shared fate. Until one night in Berlin, in the aftermath of the Second World War, and a secret that tore them apart.

But there must always be an account… and the past has a habit of catching up to the present.

Now, recalled to the Retirement Bureau from which no one can retire, Fogg and Oblivion must face up to a past of terrible war and unacknowledged heroism – a life of dusty corridors and secret rooms, of furtive meetings and blood-stained fields – to answer one last, impossible question: What makes a hero?

Posted by Civilian Reader at 8:05 PM