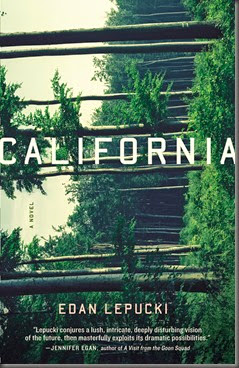 Hurt by Amazon, but Helped by the Colbert Bump?

I’m a huge fan of Stephen Colbert, and I’ve always found his show amusing. A few years back, I believe, he first mentioned the phenomena of the “Colbert Bump”, which saw some authors and musicians enjoying a spike in sales after appearing or featuring on his show. Last night, while checking Facebook, I came upon a mention of Edan Lepucki’s novel, California, having received a bump, too. I’m sad to say I hadn’t clocked the novel before I saw the article – whether this is an example of how well celebrity endorsements work, or just my general oblivious aspect, who knows. Anyway, it sounds interesting, so I thought I’d feature it here. It appears to be another recent example of “literary dystopia” fiction. Here’s the synopsis…

The world Cal and Frida have always known is gone, and they’ve left the crumbling city of Los Angeles far behind them. They now live in a shack in the wilderness, working side-by-side to make their days tolerable in the face of hardship and isolation. Mourning a past they can’t reclaim, they seek solace in each other. But the tentative existence they’ve built for themselves is thrown into doubt when Frida finds out she’s pregnant.

Terrified of the unknown and unsure of their ability to raise a child alone, Cal and Frida set out for the nearest settlement, a guarded and paranoid community with dark secrets. These people can offer them security, but Cal and Frida soon realize this community poses dangers of its own. In this unfamiliar world, where everything and everyone can be perceived as a threat, the couple must quickly decide whom to trust.

A gripping and provocative debut novel by a stunning new talent, California imagines a frighteningly realistic near future, in which clashes between mankind’s dark nature and deep-seated resilience force us to question how far we will go to protect the ones we love.

California will be published in the US in early July 2014, by Little, Brown. It is not available on Amazon, as they continue to strong-arm all Hachette US imprints. I couldn’t find any details about a UK publisher. Here’s hoping it comes to these shores soon, though. It’s available for request via NetGalley. The author is on Goodreads and Twitter.

Below is a still from The Colbert Report, in which the host promoted California, and urged viewers to buy the novel, and also offered the URL to buy the book from Powell’s Books. “We’re going to prove I can sell more books than Amazon,” he said. Oregon Live also had a video clip (US-only, sadly). 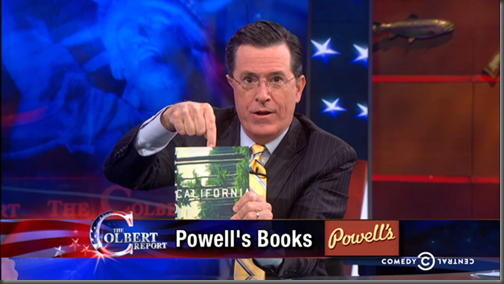 Posted by Civilian Reader at 3:19 PM