The World According to Wolverine & Spider-Man, by Matthew K. Manning & Daniel Wallace (Bantam)

Two interesting diversions for fans of the characters 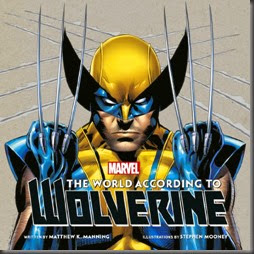 THE WORLD ACCORDING TO WOLVERINE 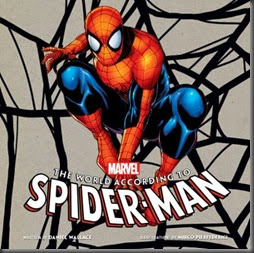 THE WORLD ACCORDING TO SPIDER-MAN

I hadn’t heard of these two books before they arrived in the mail. As a fan of both of these characters, but also one who hasn’t read as widely as I might of their varied exploits, these books proved rather fun and informative. They’re also pretty funny, and I think both Manning, Wallace and their illustrators have done a great job.

I’ve been trying to figure out for whom these books would be best suited. And I’m finding it a little difficult to identify the best audience clearly. Dedicated and long-term followers of Wolverine and Spider-Man will most likely know a lot of the information contained within, so they will be unlikely to be confronted by surprises. At the same time, new converts will likely miss a fair number of the inside jokes and references in these books. Of these two groups, the dedicated would probably enjoy them more, while the newcomer would find them good reference texts.

Each of the books is filled with lots of details on each of these characters, their closest comrades and respective rogues’ galleries. We get their origin stories, presented with original material from the comics, and also details of their evolutions and different aspects over their long, illustrious careers. Also included are amusing bits of ‘pull-out’ material. For example, in the Spider-Man volume, we have Peter Parker’s dismissal letter from J. Jonah Jameson, Jr. (“Parker, this is a difficult letter for me to write, since I’d much rather be delivering it in person so I could throttle your skinny little neck…”), Spider-Man’s New York Driving Licence, and also Spidey-related headlines. In the Wolverine book, we have a Wanted poster, a Canadian Central Railroad ticket from 1909, Logan’s CIA identity card, and also an email from Tony Stark (asking Logan to keep scarce because he doesn’t want his Iron Man suit from being scuffed or damaged – signing off, “xoxo… P.S. In all seriousness, please don’t stab me”).

There’s good strain of humour running through both of the books – clearly, the authors are big fans of their respective subjects, and while they are perfectly capable of seeing the absurdities of each, they present it with an obvious fondness and love for Logan and Peter, their legacies and quirks.

If you are a fan of either of these characters, then I strongly recommend you check these two books out. They aren’t long reads, but they offer some great background and source material, tinged with an air of nostalgia that should appeal to comic fans, young and old.