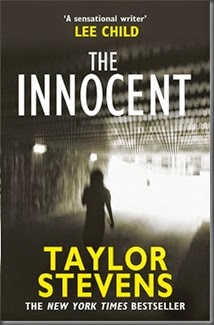 Eight years ago, a man walked five-year-old Hannah out the front doors of her school and spirited her over the Mexican border, taking her into the world of a cult known as The Chosen.

Now, after years of searching, childhood survivors of the group have found the girl in Argentina. But getting her out is a whole new challenge.

For the rescue they need someone who is brilliant, fearless and utterly ruthless.

This is the second novel featuring the tough, highly-competent private detective Vanessa Michael Munroe (after The Informationist). It’s a great, gripping read – fast-paced and thought-provoking, this should certainly appeal to fans of Stieg Larsson and Robert Ludlum, and anyone looking for a thriller series with a strong female protagonist.

Drawing on her own experiences with a cult, Stevens does a fantastic job of highlighting the sinister influence and nature of such groups. The novel also fleshes out Munroe’s own past, expands and deepens the relationships she has with her friends and colleagues. The coersive tactics, the brainwashing that make those taken in… It’s very well explained and brought to creepy life on the page.

Stevens does a really fantastic job, here. Her prose is tightly-written, the plot very well-paced (I read this very quickly), and her characters three-dimensional, realistic and developing well. This is a superb series, and if you haven’t discovered Munroe’s adventures, yet, then I strongly urge you do so. It’s not necessary to start with The Informationist, though, as this is an independently intelligible sequel. There are more novels to come, and also an eBook novella available. I can’t wait to read the third novel, The Doll.

Posted by Civilian Reader at 2:45 PM