Upcoming: “THE ACE OF SKULLS” by Chris Wooding (Gollancz) 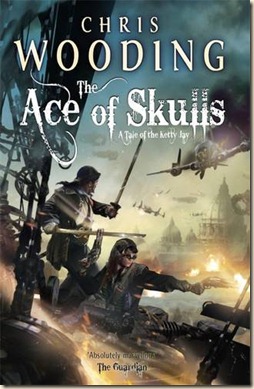 One of my most-anticipated novels of the year, The Ace of Skulls is the final planned installment in Chris Wooding’s Ketty Jay series. I loved the first two books in the series – Retribution Falls and The Black Lung Captain – but have been reprehensibly slow about reading The Iron Jackal (which I have on my Kindle – I fear an out-of-sight-out-of-mind Kindle victim, here…).

I’ll endeavor to get caught up with the third novel before this one comes out, though. It’s a great, fun, and very well-plotted and -written sci-fi Western(-ish) adventure. Here’s the synopsis…

All good things come to an end. And this is it: the last stand of the Ketty Jay and her intrepid crew.

They’ve been shot down, set up, double-crossed and ripped off. They’ve stolen priceless treasures, destroyed a ten-thousand-year-old Azryx city and sort-of-accidentally blew up the son of the Archduke. Now they’ve gone and started a civil war. This time, they’re really in trouble.

As Vardia descends into chaos, Captain Frey is doing his best to keep his crew out of it. He’s got his mind on other things, not least the fate of Trinica Dracken. But wars have a way of dragging people in, and sooner or later they’re going to have to pick a side. It’s a choice they’ll be staking their lives on. Cities fall and daemons rise. Old secrets are uncovered and new threats revealed.

When the smoke clears, who will be left standing?

The Ace of Skulls is published by Gollancz in the UK on September 19th, 2013. Really can’t wait to read this one. 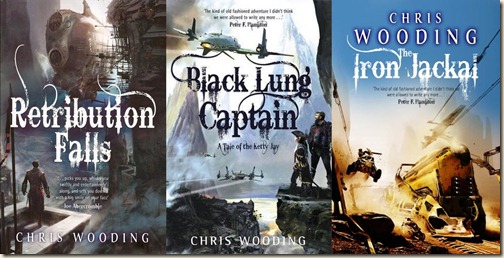