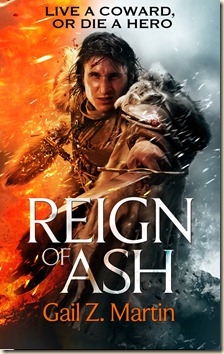 Maybe it’s a sign of the times, but we seem to be obsessed with the end of the world.

Sure, such fascinations, both literary and religious, have come and gone in times past. It’s just our luck to live in the midst of a resurgence of end-of-the-world fatalism.

Pick your poison—climate change, asteroid collision, bio-warfare, zombies, or mad scientists, there are plenty of ways to die. Personally, I prefer magic.

In Ice Forged, and the upcoming Reign of Ash, Books 1 and 2 in my Ascendant Kingdoms Saga, mages on both sides of a devastating war use magic as their doomsday weapon. They manage to destroy civilization on their continent, and magic itself.

Apocalypse-by-mage was a twist that intrigued me. Magic, in the world of the Ascendant Kingdoms, does for them what technology does for us—heals the sick, makes routine tasks easier, reduces effort, and controls the environment. Long ago, people used to do those things without magic, but since the wild power was harnessed so that it could be controlled by humans, people have forgotten the old ways.

That makes it rough when the magic stops working.

There’s a fantastic TV series about “Life After People” that shows just how quickly the modern world falls apart—literally—when people are suddenly removed and no one is left to maintain what has been built. I watched those shows, riveted, as it speculated that in about 250 years after all people disappeared, the world would heal itself and most of our structures would be largely obliterated. We’re not as important as we think we are.

That concept served well as I imagined the apocalypse in Ice Forged. Not only do survivors of the war endure hardship because of the fire that rained down from the skies in a powerful magic strike, they also suffer because there is no magic. Few people know how to treat wounds, protect crops from pests, or do many other essential tasks. Where magic was used for infrastructure, either as a repair patch or to do something important, like keeping back the sea at the sea wall, magic’s failure results in additional disaster. Not only that, but the once-harnessed magic, returned to the wild, becomes a violent force of nature, creating dangerous storms and unnatural monsters.

So when exiled convict and disgraced lord Blaine McFadden discovers that he might be the only one who can restore the magic, the stakes are high. Trying to bring magic back might cause Blaine’s death, and there’s no guarantee the attempt will work. Even if he can restore the magic, it may not function the way it did before, and in any event, the kingdom is in rubble, its leaders dead.

It’s been said that “fortune” is the combination of “danger” and “opportunity.” If you define it that way, then Blaine McFadden is a very “fortunate” man.

The Hawthorn Moon Sneak Peek Event includes book giveaways, free excerpts and readings, all-new guest blog posts and author Q&A on 21 awesome partner sites around the globe. For a full list of where to go to get the goodies, visit the Ascendant Kingdoms website.

Book Giveaway on Twitter: Every day from June 21-28, I’ll be choosing someone at random from my Twitter followers to win a free signed book. Invite your friends to follow me – for every new 200 followers I gain between June 21-28, I’ll give away an additional book, up to 20 books!

Gail Z. Martin is the author of Ice Forged in her new The Ascendant Kingdoms Saga (Orbit Books), plus The Chronicles of The Necromancer series (The Summoner, The Blood King, Dark Haven and Dark Lady’s Chosen) and The Fallen Kings Cycle (The Sworn and The Dread). She is also the author of two series on eBook short stories: The Jonmarc Vahanian Adventures and the Deadly Curiosities Series. Her books are available in bookstores worldwide and on Kindle, Kobo and Nook.

Posted by Civilian Reader at 9:32 PM