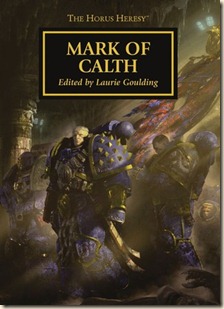 In this all-new collection of Horus Heresy stories, witness the untold tales of the Underworld War.The Heresy reached Calth without warning. In just a few hours of betrayal and bloodshed, the proud warriors of the XIIIth Legion – Guilliman’s own Ultramarines – were laid low by the treachery of their erstwhile brothers of the XVIIth. Now, as the planet is scoured by solar flares from the wounded Veridian star, the survivors must take the fight to the remaining Word Bearers and their foul allies, or face damnation in the gloomy shelters beneath the planet’s surface.The battle for Calth is far from over

I’ve enjoyed all of the Horus Heresy anthologies that Black Library has produced. So I was very happy when I received this as a gift from a friend. I’ve liked some anthologies more than others, it’s true. But in each one, I think the authors have done a great job of advancing the overall story of the larger Galactic Civil War, as well as fleshing out the mythology of the event that has dictated much of the development of the Warhammer 40,000 universe. Mark of Calth takes a slightly different approach, focussing on the after-effects of the Word Bearers’ assault on Calth (as portrayed in Dan Abnett’s Know No Fear). It’s a good selection of stories, certainly, but I definitely think it’s time to move the HH story beyond Calth… (I have high hopes for Vulkan Lives, the next novel in the series, by Nick Kyme; and the soon-to-be-more-widely-released Promethean Sun novella, also by Kyme). So, one after the other, here are some short thoughts on the stories herein…

“THE SHARDS OF EREBUS” by Guy Haley

Erebus has destroyed the anathame blade that wounded Horus (and started all of this intergalactic kerfuffle). The eight shards have been re-forged into new blades, “athames”, and six were distributed among the top-tier, most powerful members of the Word Bearers Legion. Erebus has kept one, given the remaining one to his most trusted bodyguard. They have no idea what they are for, nor their creation’s meaning. They gather, concerned. “To feel noticed by Lord Erebus is to feel as a fly noticed by the spider,” says one.

It’s a pretty great opener, actually, giving us another glimpse into the fraying bonds of brotherhood, being replaced by fierce ambition, arrogance and narcissism. Haley writes very well, tightly, and evocatively. A good start to the book.

“CALTH THAT WAS” by Graham McNeill

This story, the longest in the book, is not McNeill’s best, to be honest. It’s still pretty good, though, and has some solid moments. Thought it took a while to get going, which isn’t unusual for McNeill’s novels, but at least with those there are many pages still to go after it does find its feet..

There’s an interesting tendency in Black Library short fiction to have quite a few POVs, sometimes more than in full-length novels. I’ve never really understood this... The story settled down, though, and the slow start builds to a decent conclusion. It was a good inclusion, in the end, and added some welcome extra information and background for the continuing battle on (or, rather, under) Calth. The author’s slow-burn approach was perhaps a shade too slow, and the ending was a bit sudden and… well, it required a 1980s-style, unlikely action-scene.

McNeill is still one of the stronger established writers in Black Library’s stable, but I think he has definitely written better than this in the past.

I’ve already reviewed this story, when it was released as a single e-Novella through BL’s website. It was very good then. It’s still very good now. Check out all my thoughts, here. I haven’t had the chance to get hold of Reynolds’ other Word Bearers novels, but given the cross-over with some characters, I am very eager to do so.

“THE TRAVELLER” by David Annandale

This was a good, horror-tinged story of the survivors stuck underground, prone to paranoia and despair, developing an overwhelming desire for a saviour of any kind, especially when one survivor starts hearing voices… Of course, nothing is ever as it seems, and this built rather nicely. It reminded me just a smidge of The Thing. I predicted the truth behind the story, but Annandale unrolls the story with great pace and skill. I enjoyed this.

“A DEEPER DARKNESS” by Rob Sanders

Hylas Pelion is a survivor. He’s part of the 82nd, a force tracking Ungol Shax, a Word Bearer. This story is told as a first-person narrative, with the perspective of an Ultramarine champion. There’s a very cool nod to Greek mythology (the Gorgons), which I thought was very well done and nicely incorporated into the Warhammer 40k-universe (yes, pedants purists, I know this is set in the 31st Millennium, and not the main game’s era). The story evolves into a very good, claustrophobic tale in the “Penetralia”, a series of winding, labyrinthine tunnels under Calth.

This, along with Annandale’s, made for a nice horror diversion. I’d certainly be interested in reading more stories like these two.

“THE UNDERWORLD WAR” by Aaron Dembski-Bowden

Aaron DB is one of my favourite authors, period. There’s just something about the way he writes, and the stories he tells, that grab my attention and never let go. True, sometimes it feels like he’s taking too many bits of advice from Dan Abnett, but on the whole, I think he’s superb.

This story, apparently set seven years since the war for Calth started, a Word Bearer, Kaurtal, travels across the scorched surface of the planet, visiting various sites of key battles – “Someone had to make them remember the fallen.”

Kaurtal is a member of the Gal Vorbak, who have willingly allowed a daemon to share their bodies, in return for special abilities (they were introduced in the author’s first Heresy novel, The First Heretic) – they see the symbiosis as bringing them closer to divinity, they are “god-touched, no longer human or legionary, but a sacred bonding of flesh and spirit”.

It’s an introspective tale, reminiscent of the author’s BL15 story. I liked the bait-and-switch at the end, too, and the alternating scenes with Kaurtal’s Gal Vorbak trials. A great addition.

“You were made for ritual, for sacrifice. You were meant to be more than just a knife.”

This is an interesting story, following the ‘life’ of an athame, from owner to owner. Until it ends up on Calth. A varied story, with a lot going on. An interesting approach, and certainly a welcome change to the normal, conventional structure one finds.

It also left me asking: Who the devil is Oll Persson? He’s popped up a couple of times, now, and I have no clue who he is…

… How fortuitous, then, that this story seems to be about Oll Persson. Although, I’m still not really clear on who he is, and how he ‘fits’ in, if at all, with what’s going on.

Oll is a “perpetual”: apparently, these are immortal time travellers. Hmm… Despite the story’s length, I feel all this did was add pages to the book. The story plodded a bit, and just made things murkier. This is no where near the best I’ve read from Abnett, to be honest. There were a couple of cool moments, and it’s well-written, but... It just didn’t do it for me. It felt like it didn’t fit, like there was a lot of out-of-left-field material and inclusions. I’m pretty forgiving about breaks with canon, when it comes to the Horus Heresy series, because it’s been so long since I read much of the background texts (over a decade, in fact). But this just didn’t feel like it fit in with the rest of the series, and what we’ve learned about this universe. Gnomic hints are all well and good, but this felt… sloppy, like a mish-mash of left-over ideas and such.

In Goulding’s Editor’s Note, at the end of the book, he writes the following about Abnett’s Know No Fear, which kicked off the Calth campaign:

One of my editorial comments to Dan at the time was something like: ‘You’ve dropped in loads of plot hooks here – aren’t you going tell some more of these other stories?’ Of course, his only response was, ‘Maybe one day… But who says it has to be me that tells them…?’

He’s done the same with this short story, frankly, and after reading this comment, I kind of suggests to me that he had a bit of an imagination spasm, and included everything without really thinking ahead or beyond this book… Not the sort of approach I would expect from an author who has managed to write one of the tightest, longest series single-handedly – Gaunt’s Ghosts. I have to say, I’m rather disappointed.

To sum up, then, this isn’t a bad anthology. There are some great stories, and some that didn’t quite hit the mark. I was most impressed by the stories from some of the ‘newer’ authors (or, at least, the ones that aren’t as prolific), and I hope to see more from them in the future. I also think it’s time the story moves on from Calth – it’s being done to death, I think. I’ve never minded that Black Library decided to expand this series way beyond a handful of novels, but I’m ready for the story to move forward. So yes, very much looking forward to Promethean Sun and Vulkan Lives. 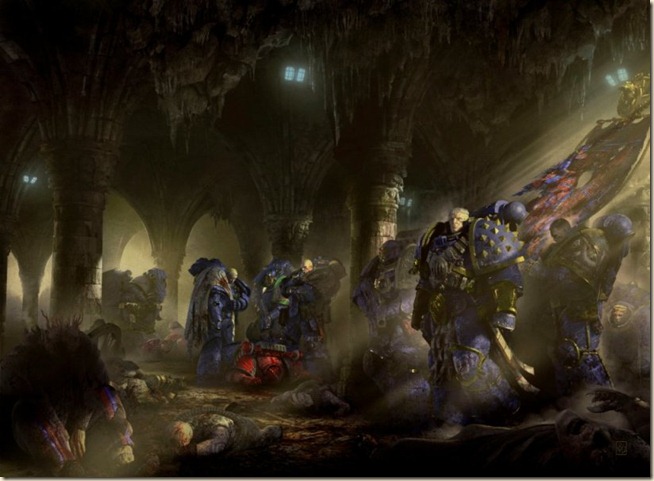 The Complete Mark of Calth Artwork