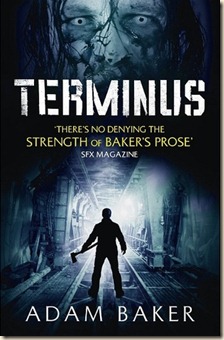 An intense tale, that proves there’s (un)life in the zombie genre yet!

Adam Baker is an author who has been on my radar for a long time, but for some reason I keep missing his novels. With his third novel, though, I was more proactive. As soon as I got my mitts on Terminus, I dove right in. This is an atmospheric, gripping and suspenseful novel. I loved it.

It’s a really tricky novel to review, given that any real discussion of the plot will throw out spoiler-after-spoiler. Events move fast, but never feels like Baker rushed through the plot points. It’s expertly paced.

We are first introduced to Lupe, a former gangbanger who escaped from prison when the world went all zombie, but is caught by what passes for law enforcement in the region – stragglers and last-surviving members of the NYPD, FDNY, and other badge-carrying people. At the vigilante’s camp, Lupe is shanghaied into shepherding a rescue squad through the subway tunnels of Manhattan to find the group she had originally been with, before the nuke was dropped on NYC. A radio transmission was intercepted, and they claim to have figured out a cure...

Once we’re delivered to the city (“It’s like someone lifted Manhattan Island and put it down on Venus”), the perspective shifts between the various members of the team – including Nariko, a former FDNY chief, Galloway (the tough-guy aaaasshooole, who really hates Lupe), a couple of Nariko’s FDNY colleagues are attached to the mission, as is a scientist. Galloway is a typical bastard, in love with his position of authority (former prison guard), who hides his own insecurities behind a cruel streak. All of the members go through interesting narrative arcs, and we get a great sense of how they handle their predicament (as opposed to just being told that it’s having an impact). There’s self-sacrifice, despair, team-work, and zombie-killing. Eventually, a pair of stragglers who have been hiding out at Fenwick Street station join the rescue team. Baker does a great job of making the characters realistic, familiar-but-not-cliché. They are engaging, and quirky, interesting people to tag along with in this hellish reality. Naturally, not all of them survive, and Baker keeps their demises interesting and plenty gruesome, and not infrequently sudden.

Baker’s clipped, sometimes rapid-fire prose make this a quick, intense read. I devoured this in just a few of sittings, each stretching late into the night (or, really, early into the morning).

Baker’s great at evoking the claustrophobic atmosphere of the subway tunnels, the characters’ sense of foreboding and peril, of being trapped beneath the radioactive wasteland that the city has become. Later in the novel, after our protagonists have stumbled across diaries, letters, and other scribblings by those who didn’t make it, Baker uses them as a device to fill in the background, and more ‘off-screen’ exposition. It’s brilliantly done, channeling different voices, and we really get into the heads of those who experienced the ravages of the plague, or the nuclear attack to cleanse Manhattan, and the dark loneliness in the tunnels (it’s brilliantly, frighteningly described near the beginning of the story).

Terminus is never boring, and it never feels old. The zombie plague has some unusual symptoms, too, beyond walking/shuffling undeath: victims develop “metallic sarcomas”. I thought this was an interesting development, and offered some weird opportunities for pretty horrific things. Baker proves there’s still original life in the zombie apocalypse genre. This would make an excellent movie, if you ask me.

I couldn’t tell you for sure if this is connected to either or both of Baker’s other two novels, but it’s possible (Goodreads says its “Outpost #2”, but I think it’s independently intelligible, and I never felt lost).

Overall, this is a superb example of the genre, and is very highly recommended. It had me on the edge of my seat, and hooked from page one. I must catch up with Outpost and Juggernaut as soon as I can (which shouldn’t be hard – I have both of them already).