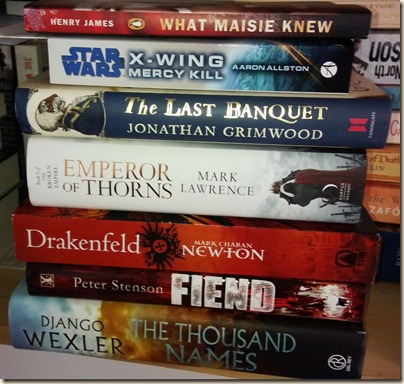 A final Books Received post for June, and it’s an absolute doozy. Four of these are among my Most Anticipated for 2013. Read on for some more info about these books… 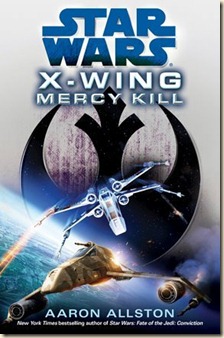 The intrepid spies, pilots, and sharpshooters of Wraith Squadron are back in an all-new Star Wars adventure, which transpires just after the events of the Fate of the Jedi series!

Three decades have passed since Wraith Squadron carried out its last mission. Taking on the most dangerous and daring operations, the rogues and misfits of the elite X-Wing unit became legends of the Rebellion and the Second Galactic Civil War, before breaking up and going their separate ways. Now their singular skills are back in vital demand — for a tailor-made Wraith Squadron mission.

A powerful general in the Galactic Alliance Army, once renowned for his valor, is suspected of participating in the infamous Lecersen Conspiracy, which nearly toppled the Alliance back into the merciless hands of the Empire. With orders to expose and apprehend the traitor—and license to do so by any and all means—the Wraiths will become thieves, pirates, impostors, forgers... and targets, as they put their guts, their guns, and their riskiest game plan to the test against the most lethal of adversaries.

Ah, Star Wars. My all-time favourite franchise, probably. I’ve read pretty much every book/novella/short story set after Episode IV, and a handful set before (I’m not a fan of the prequel-trilogy fiction, really). That being said, for some reason I’ve not yet finished the latest nine-book story-arc, Fate of the Jedi. I only have the final book, Apocalypse, to read – it was one of the books I had to leave back in New York, so I’m not sure when I’ll be able to get it read. I’ll have a look in the local library, I suppose. I bring this up because Mercy Kill is set after Apocalypse (and before Crucible, which I already have as an eARC via NetGalley). Really have to get on with it. This may, actually, be the longest break since 2007 when I haven’t read a Star Wars novel… Weird. 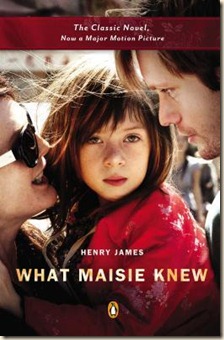 After her parents’ bitter divorce, young Maisie Farange finds herself shuttled between her selfish mother and vain father, who value her only as a means for provoking each other. Maisie – solitary, observant, and wise beyond her years – is drawn into an increasingly entangled adult world of intrigue and sexual betrayal until she is finally compelled to choose her own future.

Published in 1897 as Henry James was experimenting with narrative technique and fascinated by the idea of the child’s-eye view, What Maisie Knew is a subtle yet devastating portrayal of an innocent adrift in a corrupt society.

Don’t know much about the novel, but I know a bit about the author. So, when this arrived in the mail, I was rather intrigued. It’s a slim volume, so I’m hoping to squeeze it into my reading schedule in the not-to-distant-future. 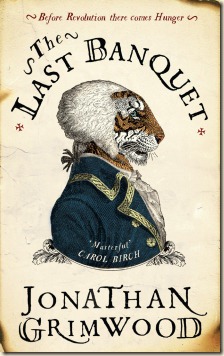 This is his story.

We meet Jean-Marie d’Aumout as a penniless orphan eating beetles by the side of a road. His fate is changed after an unlikely encounter finds him patronage and he is sent to military academy. Despite his frugal roots, and thanks to it and courage in great measure, he grows up to become a diplomat and spy.

Rising through the ranks of eighteenth-century French society, he feasts with lords, ladies and eventually kings, at the Palace of Versailles itself.

Passionate love, political intrigue and international adventure abound in Jean-Marie’s life, but his drive stems from a single obsession: the pursuit of the perfect taste. Three-Snake Bouillabaisse, Pickled Wolf’s Heart and Flamingo Tongue are just some of the delicacies he devours on his journey toward the ultimate feast.

But beyond the palace walls, revolution is in the air and the country is clamouring with hunger of a different kind.

SFF fans will also know Jonathan Grimwood as Jon Courtenay Grimwood – author of superb science fiction and an excellent historical vampire trilogy (The Assassini). I managed to miss a lot of the press surrounding this novel (it’s not SFF, so it’s perhaps not surprising that it didn’t get much attention). Nevertheless, I really like the way Grimwood writes, so I’m looking forward to reading this.

Incidentally, it’s interesting that this has a food-related premise. I’ve been noticing a few of those popping up in submissions at work, and also seen mention online from a couple of other aspiring authors. Has there been something in the water…? Needless to say, I imagine Grimwood’s will be the best, and I’m eager to get to it. 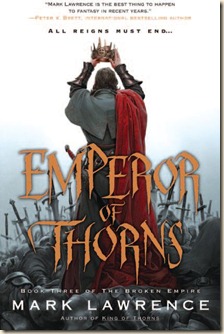 The path to the throne is broken - only the broken may walk it.

To reach the throne requires that a man journey. Even a path paved with good intentions can lead to hell, and my intentions were never good.

The Hundred converge for Congression to politic upon the corpse of Empire, and while they talk the Dead King makes his move, and I make mine. The world is cracked, time has run through, leaving us clutching at the end days, the future so bright that those who see it are the first to burn. These are the days that have waited for us all our lives. These are my days. I will stand before the Hundred and they will listen. I will take the throne whoever seeks to thwart me, living or dead, and if I must be the last emperor then I will make of it such an ending.

Does this really need an explanation or introduction? The final part of Lawrence’s debut fantasy trilogy, there are a lot of expectations. I’ve been told Mark manages to pull it all off, so I have very high hopes indeed. Watch this space… 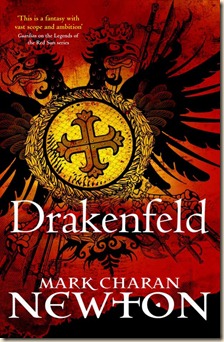 “I am Lucan Drakenfeld, second son of Calludian, Officer of the Sun Chamber and peace keeper. Although sometimes it seems I am the only person who wishes to keep it …”

The monarchies of the Royal Vispasian Union have been bound together for two hundred years by laws maintained and enforced by the powerful Sun Chamber. As a result, nations have flourished but corruption, deprivation and murder will always find a way to thrive.

Receiving news of his father’s death Sun Chamber Officer Lucan Drakenfeld is recalled home to the ancient city of Tryum and rapidly embroiled in a mystifying case. The King’s sister has been found brutally murdered – her beaten and bloody body discovered in a locked temple. With rumours of dark spirits and political assassination, Drakenfeld has his work cut out for him trying to separate superstition from certainty. His determination to find the killer quickly makes him a target as the underworld gangs of Tryum focus on this new threat to their power.

Embarking on the biggest and most complex investigation of his career, Drakenfeld soon realises the evidence is leading him towards a motive that could ultimately bring darkness to the whole continent. The fate of the nations is in his hands.

Long-time readers of CR will know that I am a big fan of Newton’s novels – the four Legends of the Red Sun books were superb. As a result, I’ve been eager to read Drakenfeld ever since Mark announced it on his website a few months ago (I forget the actual date). Really looking forward to reading this. Hopefully very soon. 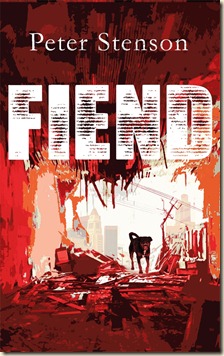 When Chase sees the little girl in umbrella socks savaging the Rottweiler, he’s not too concerned. As someone who’s been smoking meth every day for as long as he can remember, he’s no stranger to such horrifying, drug-fueled hallucinations. But as he and his fellow junkies discover, the little girl is no illusion. The end of the world really has arrived. And with Chase’s life already destroyed beyond all hope of redemption, armageddon might actually be an opportunity — a last chance to hit restart and become the person he once dreamed of being. Soon Chase is fighting to reconnect with his lost love and dreaming of becoming her hero among the ruins. But is salvation just another pipe dream?

Propelled by a blistering first-person voice and featuring a powerfully compelling anti-hero, Fiend is at once a brilliant portrait of addiction, a pitch-black comedy, and the darkest, most twisted love story you’ve ever read — not to mention one hell of a zombie novel.

I have a guest post upcoming from Stenson, telling the story of how he came to write the novel. It’s a good piece, and I’m eager to share it with people. (It goes live on July 4th.) This sounds like a really interesting spin on the zombie apocalypse genre. 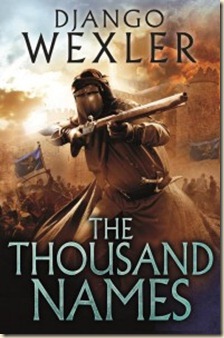 Enter an epic fantasy world that echoes with the thunder of muskets and the clang of steel—but where the real battle is against a subtle and sinister magic....

This is one of my most-anticipated debuts of 2013, and I’ve been itching to get to it. I’ll probably be reading this very soon (I have some time with minimal commutes coming up, so no fear of the HC getting beaten to hell in my bag).