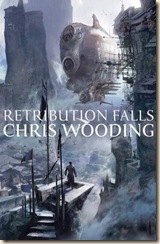 An excellent sci-fi adventure, from one of the world’s best authors in the field

Frey is the captain of the Ketty Jay, a ship he loves more than any man or beast. Accompanied by a small (and disparate, highly dysfunctional) band of vagabonds, he plies his trade on the wrong side of the law (but quietly, and in a fashion that is in no way flashy). An inveterate womaniser and rogue, Frey and his gang spend a lot of energy avoiding the heavily armed flying frigates of the Coalition Navy (not to mention any other police force they happen to be near – such as the celebrity-enforcers, the Century Knights). With their trio of ragged, yet expertly-piloted fighter craft, they run contraband, rob airships and generally make a nuisance of themselves without drawing too much attention to their activities or persons.

Following a hot tip about a ship carrying a cargo of valuables, Frey finds that he has been set up; what was supposed to be a routine piracy job (board, plunder, skedaddle) is anything but, and suddenly Frey has gone from ‘minor nuisance’ to public enemy number one. This is the story of Frey and his motley band of companions as they set out to discover who, and why, someone wants everyone hunting them.

This is my first novel by Chris Wooding, and it has been a revelation. The author’s imagination is a wonderful thing, and Retribution Falls benefits from Wooding’s ability to underline the action and contemporary sci-fi tropes with a deeper examination of his characters – be it Frey’s sociopathic and slight misanthropic tendencies, or Crake’s earnest concern for morality and his fellow men covering his own deep guilt over his past. Each character is the product of complex, difficult and varied pasts – the details of which are only alluded to, with ever more revealed as the story unfolds.

Frey and his crew’s adventures are a perfect way to introduce us to this new setting, and even when Wooding is providing some obvious exposition, it never detracts from the enjoyment of the novel, or the pace of the plot. In fact, his characters and his prose feel eminently natural and easy to read – a welcome change from some epic sci-fi/fantasy novels that are highly over-written – Retribution Falls has more in common with thrillers than its genre peers, when it comes to style (clipped, almost journalistic passages of clear prose).

Wooding’s plotting and characterisation are great – from the opening few pages’ Mexican stand-off, I was hooked, eager to read more of Frey and company’s exploits and (mis)adventures. A dark, mischievous sense of humour runs throughout the book, without overshadowing the more serious elements to the story. Each of the characters is considerably different, making this a varied and intriguing read, as the perspective switches (predominantly) between Frey, Crake, Jez, and other members of the crew – even the cat, Slag, is personified and provides some humour through his internal monologue and generally unpleasant outlook on everything. There’s a lot more going on in Retribution Falls than a mere futuristic piracy tale, yet it remains entertaining and addictive throughout.

It’s almost cliché to write so glowingly of this novel (just take a look at the book’s Amazon UK page), but Wooding is an exceptional author, and Retribution Falls is one of those rare books that makes you hate anyone who interrupts your reading it.

Very highly recommended, this is a great science-fiction novel, and certainly one of the best I’ve read this year.

For fans of: Firefly & Serenity

Posted by Civilian Reader at 4:32 PM