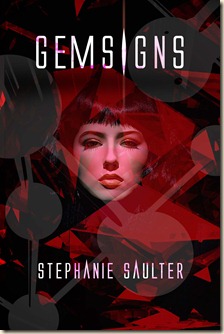 For years the human race was under attack from a deadly Syndrome, but when a cure was found – in the form of genetically engineered human beings, Gems – the line between survival and ethics was radically altered.

Now the Gems are fighting for their freedom, from the oppression of the companies that created them, and against the Norms who see them as slaves. And a conference at which Dr Eli Walker has been commissioned to present his findings on the Gems is the key to that freedom.

But with the Gemtech companies fighting to keep the Gems enslaved, and the horrifying godgangs determined to rid the earth of these 'unholy' creations, the Gems are up against forces that may just be too powerful to oppose.

I didn’t actually know anything about this novel, before I started it. Nevertheless, during a moment of book-funk, I browsed my TBR shelf, selected three books and Gemsigns had by far the best opening page. And the best second, third, and onwards. I soon found I was a few chapters in, and I couldn’t stop reading. I really enjoyed this novel.

Gemsigns is a story of prejudice, persecution, the fight for civil liberties and rights. It’s also a story about family, self, and community. The narrative follows Eli, an academic who has been selected to present a paper on the viability of Gems (genetically modified, effectively-lab-grown people) joining society at large. Up until very recently in the story, Gems had been segregated, put to specific tasks for which they were engineered for. The breadth of their abilities and quirks is vast – just as the variety among norms are broad. Helping Eli navigate the delicate sub-culture of the Gems, is Aryel Morningstar, a leader of the Gem community, who has a fair few secrets of her own.

It is also a story about people coming together despite their differences, and in the face of sometimes-violent opposition. Adding to Eli’s and the Gems’ difficulties, it also seems to be a time of economic difficulty, and I’m sure everyone is aware of how that can pour fuel onto the fire of racial tension. Towards the end of the novel, we see the rise of a few “godgangs”, who have perverted religion as a shield to commit unspeakable acts and attack as many Gems (and sympathisers) as they can.

The characters are well-drawn, and I grew to really care for Gabriel, Gaela and Bal. A couple of characters were easily identifiable as Extras, but there’s nothing wrong with that. Everyone else was really engaging and realistic – even those who were most modified by the GemTechs. The narrative moves at a good, steady pace throughout.

If I had one niggle, it would be that Saulter seemed unable to resist writing Donal’s Scottish accent… Writing accents is a tricky proposition, and unfortunately it rarely works, unless it’s the occasional word. But this is just one weak spot, in an otherwise excellent novel.

The story unfolds with well-timed revelations, and a slow-burn narrative. It lacks in bombast, which I liked. It makes a nice change from the action-heavy sci-fi novels I seem to gravitate towards normally… I’m looking forward to the next installment in the series, and hope we get to learn a little more about the GemTechs (who seemed a tad peripheral at times).

I can’t stress this enough: Saulter writes extremely well. Her prose is fluid, unpretentious and nicely composed. Info-dumps are perfectly timed and kept to a bare minimum. It’s a rather journalistic style – fluid, tightly composed – which also makes the news snippets sprinkled throughout the book read like genuine BBC or Guardian pieces. The story is loaded with commentary, political, social and otherwise, but the novel doesn’t feel preachy, isn’t heavy-handed, and the story is intelligent and engrossing. It’s also delightfully, understatedly British in parts, which I really enjoyed.

A powerful commentary on contemporary society and politics, excellently written. Gemsigns is a must-read of 2013.