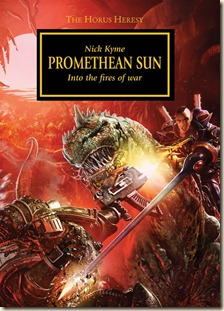 As the Great Crusade sweeps across the galaxy, the forces of the Imperium encounter a world held in thrall by the alien eldar. While the Iron Hands of Ferrus Manus and Mortarion’s Death Guard battle against the hated xenos, it is the Salamanders who brave the deepest and most deadly jungles, encountering monstrous reptilian beasts and foul witchery along the way. Ultimately, it falls to their primarch Vulkan himself to thwart the sinister designs of the eldar, if the Legions are to liberate this world and bring illumination to its inhabitants.

Promethean Sun was Black Library’s first limited edition Horus Heresy novella. As someone who couldn’t afford it back then, naturally I grumbled quietly to myself about missing out on this part of the series – which has, actually, been a superb example of sustained, multi-volume and multi-author storytelling. There have been wobbles, of course, but for the most part this series has been amazingly strong. So, back to this book. After reading it, I realise I shouldn’t have grumbled. Sad to say (and very surprisingly), this was a disappointment, with greater weaknesses than strengths. The story meanders, the writing’s not as strong as I know Kyme can produce, and Vulkan’s characterisation feels off. For completists only, I would say.

To be fair, the story isn’t bad, and is kind of typical for Black Library fiction: it opens with combat, followed by some exposition and introspection, followed by more combat, some flashback, and so on. In fact, the structure was very typical, I thought. There were few surprises (the way the story in the ‘present’ was brought back to the flashbacks felt clunky and I just didn’t buy it). I certainly welcomed the opportunity to read about another Primarch (Vulkan of the Salamanders), as I still find them among the most fascinating characters in science-fiction. However, despite the things I did like about Promethean Sun, I was nevertheless left feeling rather disappointed by the novella. I have certainly read better – in the series, certainly, but also from Kyme (“Feat of Iron”, his contribution to The Primarchs, for example, was superb, and suffered none of the weaknesses of this story). I had hoped for a little more interaction between the three Primarchs featured (especially Mortarion, who needs some more exposure and focus, in my opinion – I think his descent to Chaos would be truly fascinating, and perhaps more so than Fulgrim’s in Angel Exterminatus).

The language used and many descriptions are on the florid, over-written side. Some of them would, in my opinion, be considered ‘rookie-mistakes’ that fall into the Writing the Fantastical/Science-Fictional oeuvre. For example, using archaic language as a signpost that you are Reading Fantasy/SF. Use of terms like “boy-child” (never “boy”) felt forced. There are also occasional moments when the uncharitable cynic in me raised an eyebrow at what I perceived as proof of the Thesaurus Option. (This is something best exemplified by Graham McNeill’s novels’ first paragraphs…)

A slight aside: the mention of “hela-lizards” did make me chuckle. It reminded me of a former colleague who would constantly use “hella” as an exclamation… (“There were, like, hela-lizards, man. Shit was real. Do you like my skinny-pauldrons...? Fetch me your finest craft-amasec!”)

As opposed to my experiences with the aforementioned “Feat of Iron”, as well as most of Kyme’s other work, here I found myseld phasing out during the combat scenes. There was a distinct lack of surprises. I never felt that the characters were in peril, there was little sense of danger or threat. A really surprising weakness.

Primarch Vulkan himself is mostly well-drawn, though at times he came across as weak and less than a Primarch should be. After the opening battle, it did get better. As I mentioned earlier, it was nice to have Salamanders front-and-centre for a change, and I did enjoy the flashbacks (although, these sometimes reinforced my impression of Vulkan as a strangely naïve character). I really hope Vulkan Lives, the next full-length novel in the Horus Heresy series (also written by Kyme) fleshes out and settles Vulkan’s character. He has the potential to be one of the most fascinating of the 19 primarchs (all of whom are, indeed, fascinating in their own right).

Some of the more introspective, analytical moments of the story had a lot of potential, suggesting the characters might expound on the nature of war, the Crusade and the Astartes’ place within the expansion and future of the Imperium. However, none of it materialised as I had hoped – other authors have managed to do just this, adding layer-upon-layer to their characters and readers’ understanding of them and the setting. Perhaps Kyme felt he didn’t have the space to do so, and therefore only suggested at what he might expand on in Vulkan Lives…

“It is only fear. We have seen it before.” Vulkan gently pulled the hysterical woman away from his equerry. Touched by the primarch’s aura, she called enough for an Army trooper to take her away. A little farther away, a picter flashed as one of the remembrancers recorded the moment for posterity. “You.”

The man quailed as Vulkan addressed him. “M-my lord?”

“What is your name?”

Vulkan nodded. “You will surrender your picter to the nearest discipline-master.”

“No one must see that we are saviours, Glaivarzel. The Emperor needs us to be warriors, to be death incarnate. To be anything less would endanger the Crusade and my Legion. Do you understand?”

So, to sum up: this is not Kyme’s best. It hasn’t warned me off reading his Tome of Fire Warhammer 40,000 series, also focusing on the Salamanders Legion/chapter. I do, after all, have every book. I’ve just been slow. I’ve heard very good things about the series, though, so I will try to get to them ASAP.

I know people get annoyed when reviewers discuss a book’s cost and the physical product, rather than just the story and content, but I feel compelled to grumble about the price of this novella. First released as a limited edition hardcover, with extra materials, this is now a sub-150-page novella, costing £9.50 as an eBook. There is no extra material. No illustrations, as in the other Horus Heresy hardcovers (and the eBook equivalents). Given its story, and cost, I would say this is not worth rushing out to buy – the overall story of the Heresy is not advanced as much as I would have liked, making this non-essential.

Recommended for completists only. Sad to be disappointed. 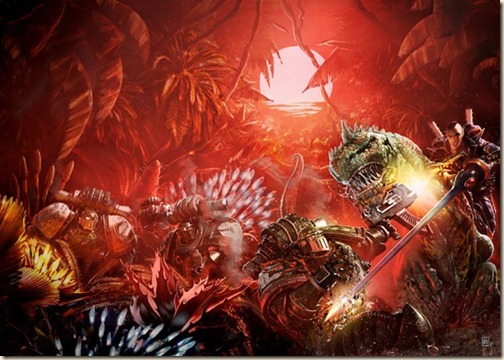