I haven’t managed to keep on top of my Angry Robot/Strange Chemistry reviewing – certainly not as much as I would like. (They have had a considerable number of awesome-sounding titles coming out recently… I really should get my act together and read more of them…)

Nevertheless, one of my favourite debut reads last year was Gwenda Bond’s Blackwood. I was very intrigued, therefore, to learn about Bond’s next novel, The Woken Gods. I didn’t know much about it, but the cover certainly nabbed my interesting… 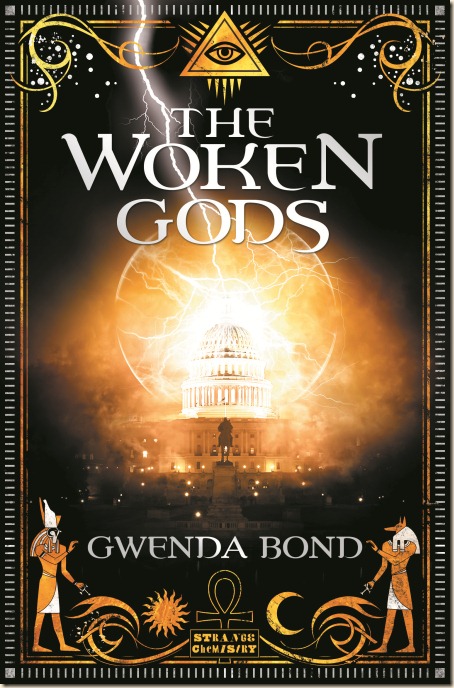 The US Congress, the All-Seeing Eye, Egyptian Gods…? Colour me intrigued. The Woken Gods will be published by Strange Chemistry in September 2013. Here’s the synopsis…

Five years ago, the gods of ancient mythology awoke around the world.

This morning, Kyra Locke is late for school.

Seventeen-year-old Kyra lives in a transformed Washington, D.C., home to the embassies of divine pantheons and the mysterious Society of the Sun. But when rebellious Kyra encounters two trickster gods on her way back from school, one offering a threat and the other a warning, it turns out her life isn’t what it seems. She escapes with the aid of Osborne “Oz” Spencer, an intriguing Society field operative, only to discover that her scholar father has disappeared with a dangerous relic. The Society needs it, and they don’t care that she knows nothing about her father’s secrets.

Now Kyra must depend on her wits and the suspect help of scary gods, her estranged oracle mother, and, of course, Oz–whose first allegiance is to the Society. She has no choice if she’s going to recover the missing relic and save her father. And if she doesn’t? Well, that may just mean the end of the world as she knows it.

I’m certainly looking forward to this.