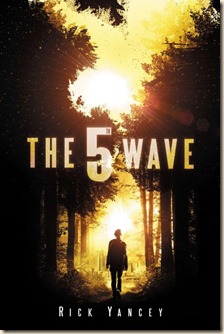 A Sinister new YA Dystopia Series

Now, it’s the dawn of the 5th wave, and on a lonely stretch of highway, Cassie runs from Them. The beings who only look human, who roam the countryside killing anyone they see. Who have scattered Earth’s last survivors. To stay alone is to stay alive, Cassie believes, until she meets Evan Walker. Beguiling and mysterious, Evan Walker may be Cassie’s only hope for rescuing her brother – or even saving herself. But Cassie must choose: between trust and despair, between defiance and surrender, between life and death. To give up or to get up.

There is a lot to like about this novel. The world-building is interesting, the characters are (for the most part) well-defined and well-written. The story is focused, giving it a quick-pace and addictive momentum. I really enjoyed reading this, despite one major niggle around the middle. Certainly, it’s easy to see why people have been talking about the series, and why Penguin think they are on to a winner. Among the better YA dystopia series, certainly.

The opening chapters offer one of the best introductions to a dystopian future I have read in a long while. We get a great sense of the environment in which Cassie, the first protagonist we follow, is operating and trying to survive. We also learn what the waves of alien attacks have done to the survivors, both physically (billions dead) and mentally (this is now paranoia city…).

“If you can’t trust anyone, then you can trust no one. Better to take the chance that Aunty Tilly is one of them than play the odds that you’ve stumbled across a fellow survivor. That’s friggin’ diabolical. It tears us apart. It makes us that much easier to hunt down and eradicate. The 4th Wave forces us into solitude, where there’s no strength in numbers, where we slowly go crazy from the isolation and fear and terrible anticipation of the inevitable… This is what the Others have done to us. You can’t band together to fight without trust. And without trust, there was no hope. How do you rid the Earth of humans? Rid the humans of their humanity.”

And so, survivors “put on a human face so no human face can be trusted. The only answer: Kill everyone or risk being killed by anyone.”

Most importantly, we get to know Cassie very quickly. Within about 5% of the novel (yes, read this on my Kindle), I felt I knew her pretty well, and certainly felt myself rooting for her. She is a bit true-to-type and is probably exactly what you expect from a YA heroine/hero, sure, but Yancey writes her well. She is a good guide, with an engaging, inviting voice. However, and this is my greatest issue with the book, this state of affairs did not last. I found Cassie’s character changed completely once she met Evan. She went from being hyper-self-sufficient to, effectively, totally-dependent (paranoid still, but dependent nonetheless). This weakened her. Though, she’s also not blind to the strangeness of her situation…

“Somehow the fact that I was rescued by a very good-looking guy with a lopsided grin and large, strong hands is the most unnerving thing that has happened to me since the Others arrived.”

Her interest in Evan, while sometimes a bit over-the-top, is also quite well done, reflecting the conflicted, bumbling, hormone-influenced confusion when it comes to people teenagers develop crushes on:

“What?” Smiling that damned lopsided, sexy grin, shoulders up, hands stuffed deep in his pockets with a sort of aw-shucks attitude, which I guess is meant to drive me the good kind of crazy. What is it about him that makes me want to slap him and kiss him, run from him and to him, throw my arms around him and knee him in the balls, all at the same time? I’d like to blame the Arrival for the effect he has on me, but something tells me guys have been doing this to us for a lot longer than a few months.

All of the other protagonists go through pretty realistic evolutions. The army has been collecting surviving teens and children, transporting them to the training facility, leaving adults behind for… clean-up. The militarisation of the young is troubling, certainly, but it is addressed through the eyes of some of those recruits. (A lot of YA novels seem to promote weapons-skills…) Our second main perspective is presented through Ben, who comes to be known as “Zombie” at the training camp. He develops into a more interesting character than Cassie, by the end of the book. All of his comrades are varied characters, and interesting to read about, too – certainly Ringer, who I enjoyed: she’s clearly a little mad, closed off (maybe edging towards sociopathic, actually). Sammy, whose call-sign is “Nugget”, was another good character, so very young and yet thrust into such horrific situations, brutal training, and a grueling environment.

Some of the early chapters with Evan felt a little muddled. As did some attempts to create uncertainty in the reader – there were at least two scenes that felt like attempts to make us question what we knew, when we’d already been doing that, and throwing these in ruined the tension and were obvious, and just a little artless. Minor niggles, I suppose, but they were clear. On the whole, though, Yancey’s prose is tight and well-crafted. It’s nothing spectacular, but he has a clear style, and one that pulls the reader on through the story.

Overall, though, Yancey has created a sinister, atmospheric and gripping alien-invasion-dystopia. The Waves are well-conceived, with the eponymous wave utterly devious.

The 5th Wave is flawed, but it’s gripping and well-executed. I definitely recommend it, and can’t wait for the next book in the series.