Excerpt: THE BEST OF ALL POSSIBLE WORLDS by Karen Lord (Jo Fletcher Books)

Karen Lord is also the author of Redemption in Indigo, which I first heard of at the Kitschies Award ceremony back in February 2013. It immediately went on to my to-be-purchased list (I’m still getting around to it!). Luckily, I do have a copy of The Best of All Possible Worlds, the author’s second and already-critically-acclaimed novel, which I hope to read as soon as possible. In the meantime, I offer you this taste of the novel, courtesy of Lord’s UK publisher, Jo Fletcher Books…

He always set aside twelve days of his annual retreat to finish up reports and studies, and that left twelve more for everything else. In earlier times, he had foolishly tried retreats within commreach of his workplace, and that was not at all helpful. There would always be some crisis, something for which his help would be required. As his salary and sense increased, he took his retreats further and further away, until at last he found himself going off-planet to distant temples where the rule of silence and solitude could not be broken by convenient technologies.

This season, he had chosen Gharvi, a place with small wooden buildings scattered about a huge temple of stone, all set within the rain shadow of a mountain range. An endless ocean, both vista and inspiration, ran parallel to the mountains, and a beach between the two offered long walks to nowhere on either side. A place of two deserts, some said, for sea and land were bleak together – one boundless, one narrow, and both thirsty.

There was a place at home very like it, which had probably influenced his choice, but the sky was unique. The atmosphere was the cloudy blueish-lavender of a recently bioformed planet and the sun was scorching bright. It was so unlike the cool, strong blues and gentle sunlight of his home world that for the first few days he kept his head down and his door closed till nightfall.

On the twelfth day, he took his handheld, replete with work well completed, and put it in the box outside his hermitage door. He cooked and ate his evening lentils, slept soundly through the night and rose to prepare his morning porridge. There was a little water left over from the day before (he was ever frugal), but to have enough for washing he had to fetch the new day’s supply from the box. The young acolytes of the temple always put sufficient water and food into each hermit’s box before dawn. It was enough to stay clean, to fill the solar pot with porridge or pottage and to sip and slake the constant thirst that was the natural consequence of dry air and silence. The acolytes would also take away his handheld and safely transmit its contents to his workplace.

But his handheld was still there.

He paused, confused by this disconnect in the seamless order of the temple’s routine. He stared at the untouched box. He looked up and frowned in puzzlement at the squat shape of the temple, vaguely visible through a haze of heat, blown sand and sea spray.

Then he shrugged and went on with his day, a little dustier, a little thirstier but convinced that an explanation would eventually be made manifest.

The following morning, well before dawn, the sound of the box lid closing woke him from a sleep made restless by dreams of dryness. He waited a bit, then went to bring in the supplies and drink deeply of the water. His handheld was gone and a double ration of food sat in its place. He did not even peer into the darkness to catch sight of the tardy acolyte. Order had been restored.

‘Dllenahkh, with your level of sensitivity and strength, you must go on retreat regularly.’ So he had been told, long ago, by the guestmaster of his monastery. ‘You are constantly looking to set things to rights, even within yourself. A retreat will teach you again and again that you are neither indispensable nor self-sufficient.’

Put bluntly, learn to stop meddling. Commitment is important, detachment equally so. He congratulated himself on his developing ability to keep curiosity in check and spent the next few days in undisturbed meditation and reflection.

One day, after a long morning meditation, he felt thirsty and decided to fetch more water from his supply box. He stepped out with his glass drinking bowl in hand and set it on the edge of the box while he tilted the half-lid and reached inside. His hands were steady as he poured water smoothly from the heavy narrownecked jug. Moving slowly, he straightened and took a moment of blissful idleness, the jug left uncovered near his feet, to squint at the sun glare on the desert beach and the desert ocean, and to feel the coolness of the water creeping into his palms as he held the bowl and waited to drink. It was a child’s game, to hold a bowl of water and mark the increase of thirst with masochistic pleasure, but he did it sometimes.

He brought the bowl to his mouth and had a perfect instant of pale-blue ocean, bright blue glass and clear water in his vision before he blinked, sipped and swallowed.

Many times after, when he tried to recall, his mind would stop at that vivid memory – the neatly nested colours, the soothing coolness of the glass – and not wish to go any further. It was not long after that, not very long at all, that the day became horribly disordered.

A man walked out of the ocean, his head darkly bright with seawater and sunlight. He wore a pilot’s suit – iridescent, sleek and permeable – which would dry as swiftly as bare skin in the hot breeze, but his hair he gathered up in his hands as he approached, wringing water from the great length of it and wrapping it high on the crown of his head with a band from his wrist.

Recognition came to Dllenahkh gradually. At first, when the figure appeared, it was a pilot; then, as it began to walk, it was a familiar pilot; and finally, with that added movement of hands in hair, it was Naraldi – a man well known to him, but not so well known as to excuse the early breaking of a retreat. He opened his mouth to chide him. Six more days, Naraldi! Could anything be so important that you could not wait six more days? That was what he intended to say, but another thought came to him. Even for a small planet with no docking station in orbit, it was highly uncommon for a mindship to splash down so close to land that a pilot could swim to shore. Although he knew Naraldi, they were not so close as to warrant a visit at this time and in this place.

The pilot slowed his step and looked uncertainly at him with eyes that streamed from the irritation of salt water.

Naraldi wiped at his wet face and gave no reply.

‘My mother?’ Dllenahkh prompted to break the silence, dread growing cold and heavy in his stomach.

‘Yes, your mother,’ Naraldi confirmed abruptly. ‘Your mother, and my mother, and . . . everyone. Our home is no more. Our world is—’

‘No.’ Dllenahkh shook his head, incredulous rather than upset at the bitterness and haste of Naraldi’s words. ‘What are you saying?’

He remembered that he was still thirsty and tried to raise the bowl again, but in the meantime his hands had grown chilled and numb. The bowl slipped. He snatched at it, but only deflected it so that it struck hard on the side of the water jug and broke just in time to entangle his chasing fingers.

‘Oh,’ was all he said. The cut was so clean, he felt nothing. ‘I’m sorry. Let me . . .’ He crouched and tried to collect the larger fragments but found himself toppling sideways to rest on one knee.

Naraldi rushed forward. He grasped Dllenahkh’s bleeding right hand, yanked the band from his hair and folded Dllenahkh’s fist around the wad of fabric. ‘Hold tight,’ he ordered, guiding Dllenahkh’s left hand to clamp on to his wrist. ‘Don’t let go. I’ll get help.’

He ran off down the beach towards the temple. Dllenahkh sat down carefully, away from the broken bits of glass, and obediently held tight. His head was spinning, but there was one small consolation. For at least the length of time it took Naraldi to return, he would remember the words of the guestmaster: he would not be curious, he would not seek to know, and he would not worry about how to right the tumbled world.

Karen Lord’s The Best of All Possible Worlds is published by Jo Fletcher Books in the UK, and Del Rey in the US (both covers, below the synopsis).

The Sadiri were once the galaxy’s ruling élite, but now their home planet has been rendered unlivable and most of the population destroyed. The few groups living on other worlds are desperately short of Sadiri women, and their extinction is all but certain.

Civil servant Grace Delarua is assigned to work with Councillor Dllenahkh, a Sadiri, on his mission to visit distant communities, looking for possible mates. Delarua is impulsive, garrulous and fully immersed in the single life; Dllenahkh is controlled, taciturn and responsible for keeping his community together. They both have a lot to learn. 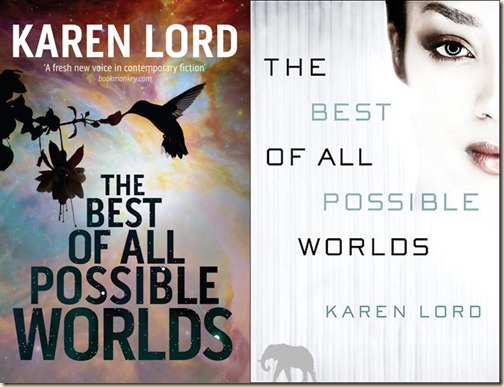