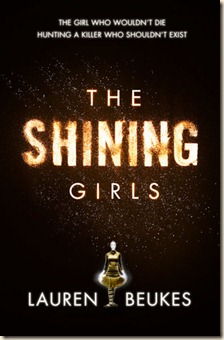 The girl who wouldn’t die, hunting a killer who shouldn’t exist…

1930’s America: Lee Curtis Harper is a delusional, violent drifter who stumbles on a house that opens onto other times.

Driven by visions, he begins a killing spree over the next 60 years, using an undetectable MO and leaving anachronistic clues on his victims’ bodies.

But when one of his intended ‘shining girls’, Kirby Mazrachi, survives a brutal stabbing, she becomes determined to unravel the mystery behind her would-be killer. While the authorities are trying to discredit her, Kirby is getting closer to the truth, as Harper returns again and again...

This has been one of the most anticipated novels of 2013. There are ads in many publications, and plenty of posters in the London Underground. I’m very happy to report, then, that it absolutely deserves the hype it has enjoyed. The Shining Girls is a superb novel, and one of the most interesting thrillers I’ve read in a long while. Easily one of the best reads of the year so far.

What jumped out at me right from the start was the strength of Beukes’s prose. They’ve wonderfully composed – not the least bit florid, but nor stripped to the bone. They’re just right. The author is able to portray both the mundane and sinister in equally evocative, engaging manners. There’s also a great, natural humour running through the dialogue – especially between Kirby and her journalist boss/mentor, Dan.

The novel is not presented in a linear narrative, as can perhaps be expected – the chapters bounced around a bit, between the past and 1990s. This did have the effect of feeling slightly disjointed to begin with, but I quickly got used to the pacing and rhythm. We see Kirby before and after her attack, which offered a nice mix, as well as great character development.

We see Harper acclimating to his bizarre new “role” (like many psychopaths, he thinks he is on some sacred mission, to snuff out these shining girls). He learns along the way how best to approach each victim, and it was interesting and disturbing to see his evolution as a killer. It’s tricky to write about this novel in any detail (how many times have I written that in recent months…?) – much of the pleasure in reading it is in seeing how the story unfolds, along with a good number of surprises. 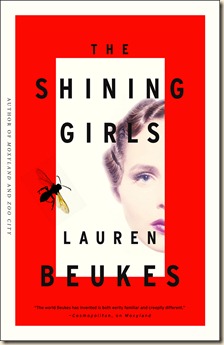 The story really kicks in after Kirby gets an internship at the Chicago Sun Times, and pairs up with the homicide reporter who covered her attempted murder (he’s now working the sports desk, and doesn’t like interns, but of course she catches his interest after introducing herself). Kirby’s analysis of how others treat her, and how she handles it, is well presented and sharply written. She’s a superb character, and I would have liked more of the novel told from her perspective (she didn’t feature as much as I had been expecting). That being said, Beukes puts much of the focus on the victims (of which Kirby is one, of course), presenting a more varied novel. We get interesting and compact windows into and snapshots of the lives of these impressive women.

There is also a really good author’s note at the end, including some very good bibliographic entries – some of which I’ve read and would certainly recommend.

I thoroughly enjoyed this. Some people may find the jumping about a little disorienting to begin with, but you get used to it quickly. The characters are great, varied, and wonderfully written. The story is addictive, gripping, and builds towards a satisfying conclusion.

A superb novel, this certainly deserves all the hype and attention it has been enjoying. A real page-turner. Highly recommended. I can’t wait to read Beukes’s next novel. She is easily one of my favourite new authors (well, new for me, anyway…).

The Shining Girls is published by Harper Collins in the UK and Mulholland Books in the US.