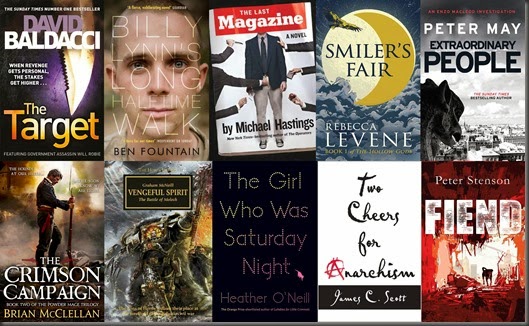 As well as these titles, I also received the three Angry Robot Books I mentioned in the “Upcoming” post I shared a couple days ago. And also Roslund & Hellstrom’s Two Soldiers, for which I’m also still running a competition. 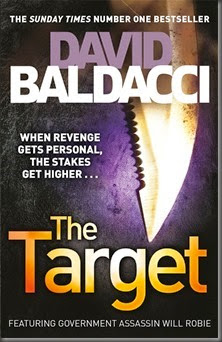 The mission is to enter one of the most dangerous countries in the world. The target is one of the toughest to reach. The result could be momentous - or it could be Armageddon. There is no margin for error. US government operatives Will Robie and Jessica Reel have to prove they are still the best team there is. But are they invincible when pitted against an agent whose training has been under conditions where most would perish? An old man is dying in an Alabama prison hospital, it seems there is one more evil game he has still to play. And it's a game which comes close to home for Reel and Robie. But this time the stakes might be way too high.

I loved the first two novels – The Innocent and The Hit – and the short story (Bullseye) featuring Will Robie (reviews to come). So I pre-ordered this a while ago. It’s now come through, and I’ll be reading it very soon. 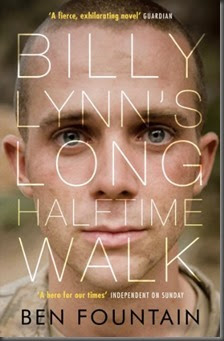 Three minutes and forty-three seconds of intense warfare with Iraqi insurgents has transformed the eight surviving men of Bravo Squad into America’s most sought-after heroes. Now they’re on a media-intensive nationwide tour to reinvigorate support for the war. On this rainy Thanksgiving, the Bravos are guests of the Dallas Cowboys, slated to be part of the halftime show alongside Destiny’s Child.

Among the Bravos is Specialist Billy Lynn. Surrounded by patriots sporting flag pins on their lapels and Support Our Troops bumper stickers, he is thrust into the company of the Cowboys’ owner and his coterie of wealthy colleagues; a born-again Cowboys cheerleader; a veteran Hollywood producer; and supersized players eager for a vicarious taste of war. Over the course of this day, Billy will drink and brawl, yearn for home and mourn those missing, face a heart-wrenching decision, and discover pure love and a bitter wisdom far beyond his years.

Heard a lot about this novel. It was a Kindle Daily Deal (I think – it may have just been discounted, or on sale…), so I picked it up. It’s not on offer/sale anymore, sadly, but it’s not too expensive, either. Hopefully get to it soon(ish). 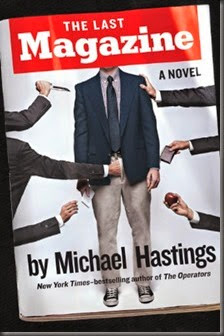 The year is 2002. Weekly newsmagazines dominate the political agenda in New York and Washington. A young journalist named Michael M. Hastings is a twenty-two- year-old intern at The Magazine, wet behind the ears, the only one in the office who’s actually read his coworker’s books. He will stop at nothing to turn his internship into a full-time position, and he’s figured out just whom to impress: Nishant Patel, the international editor, and Sanders Berman, managing editor, both vying for the job of editor in chief. While Berman and Nishant try to one-up each other pontificating on cable news, A. E. Peoria – the one reporter seemingly doing any work – is having a career crisis. He’s just returned from Chad, where, instead of the genocide, he was told by his editors to focus on mobile phone outsourcing, which they think is more relevant. And then, suddenly, the United States invades Iraq – and all hell breaks loose. As Hastings loses his naïveté about the journalism game, he must choose where his loyalties lie – with the men at The Magazine who can advance his career or with his friend in the field who is reporting the truth.

I’m a big fan of Hastings’s non-fiction work – in particular, The Operators, which I reviewed on my non-fiction blog, Politics Reader. This novel has been published posthumously, as the author sadly died in a car crash last year. Not sure when I’ll get around to this, though, as the NetGalley ARC was a PDF, and it’s not as easy (for me) to read a book on my iPad. Hopefully soon, anyway. 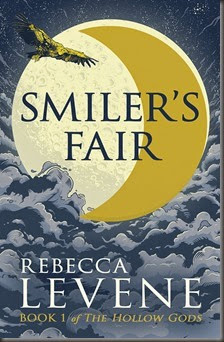 Yron the moon god died, but now he’s reborn in the false king’s son. His human father wanted to kill him, but his mother sacrificed her life to save him. He’ll return one day to claim his birthright. He’ll change your life.

Smiler’s Fair: the great moving carnival where any pleasure can be had, if you’re willing to pay the price. They say all paths cross at Smiler’s Fair. They say it’ll change your life. For five people, Smiler’s Fair will change everything.

In a land where unimaginable horror lurks in the shadows, where the very sun and moon are at war, five people – Nethmi, the orphaned daughter of a murdered nobleman, who in desperation commits an act that will haunt her forever. Dae Hyo, the skilled warrior, who discovers that a lifetime of bravery cannot make up for a single mistake. Eric, who follows his heart only to find that love exacts a terrible price. Marvan, the master swordsman, who takes more pleasure from killing than he should. And Krish, the humble goatherd, with a destiny he hardly understands and can never accept – will discover just how much Smiler’s Fair changes everything.

There was much excitement when this novel was announced. Sad to say, I had no recollection of hearing Levene’s name before. Nevertheless, I did some investigating and think this sounds pretty cool. Smiler’s Fair is the start of a new fantasy series, The Hollow Gods. It also has a beautiful cover, in my opinion. 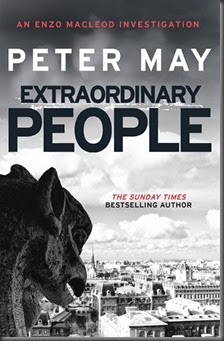 Jacques Gaillard, brilliant teacher of France’s future VIPs, vanished years ago. The mystery inspires a bet that Enzo Macleod, forensic scientist and biologist, can find out what happened to Gaillard by applying new science to a cold case.

This is the first in the Enzo Files, a series that was previously only available in the UK in eBook – Quercus will be publishing the series over the next few months in paperback (starting in July). I got the eARC. Because I’m difficult that way… I’ve never read anything by May before, so I’m looking forward to giving it a try. 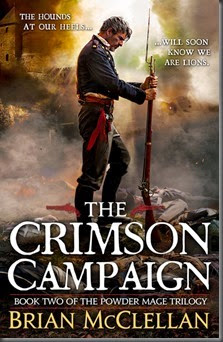 ‘The hounds at our heels will soon know we are lions’

Tamas’s invasion of Kez ends in disaster when a Kez counter-offensive leaves him cut off behind enemy lines with only a fraction of his army, no supplies, and no hope of reinforcements. Drastically outnumbered and pursued by the enemy’s best, he must lead his men on a reckless march through northern Kez to safety, and back over the mountains so that he can defend his country from an angry god. In Adro, Inspector Adamat only wants to rescue his wife. To do so he must track down and confront the evil Lord Vetas. He has questions for Vetas concerning his enigmatic master, but the answers might come too quickly. With Tamas and his powder cabal presumed dead, Taniel Two-shot finds himself alongside the god-chef Mihali as the last line of defence against Kresimir’s advancing army. Tamas’s generals bicker among themselves, the brigades lose ground every day beneath the Kez onslaught, and Kresimir wants the head of the man who shot him in the eye.

I thoroughly enjoyed Promise of Blood, so naturally I was very happy to get a review copy of this. It’s very high on my TBR pile, so expect more in the near future.

Also on CR: Interview with Brian McClellan; Guest Posts on Favourite Novel, Protagonist Ages in Epic Fantasy; Reviews of Promise of Blood, The Girl of Hrusch Avenue, Hope’s End, Forsworn, The Face in the Window 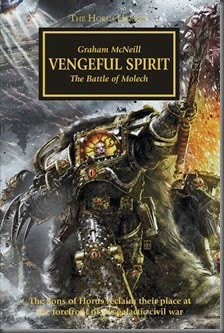 Once the brightest star in the Imperium and always first among his Primarch brothers, Horus has dragged the Space Marine Legions into the bloodiest conflict that the galaxy has ever seen. While their allies wage war on a thousand different fronts, the XVIth Legion descend upon the Knight world of Molech – home to the ruling House Devine, and a principal stronghold of the Imperial Army. The forces loyal to the Emperor stand ready to defy the Warmaster, but just what could have drawn Horus to attack such a well defended planet, and what might he be willing to sacrifice to fulfill his own dark destiny?

Bought this today. No surprise, really, as I’m a big fan of the Horus Heresy series, and McNeill’s recent offerings have been pretty great. 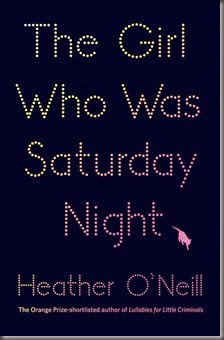 Heather O’Neill, The Girl Who Was Saturday Night (Quercus)

At birth, Nouschka forms a bond with her twin that can never be broken.

At six, she’s the child star daughter of Quebec’s most famous musician.

At sixteen, she’s a high-school dropout kicking up with her beloved brother.

At nineteen, she’s the Beauty Queen of Boulevard Saint-Laurent.

At twenty, she’s back in night school. And falling for an ex-convict.

And it’s all being filmed by a documentary crew.

Don’t know much about it. Sounded interesting. Simples.

James Scott taught us what’s wrong with seeing like a state. Now, in his most accessible and personal book to date, the acclaimed social scientist makes the case for seeing like an anarchist. Inspired by the core anarchist faith in the possibilities of voluntary cooperation without hierarchy, Two Cheers for Anarchism is an engaging, high-spirited, and often very funny defense of an anarchist way of seeing – one that provides a unique and powerful perspective on everything from everyday social and political interactions to mass protests and revolutions. Through a wide-ranging series of memorable anecdotes and examples, the book describes an anarchist sensibility that celebrates the local knowledge, common sense, and creativity of ordinary people. The result is a kind of handbook on constructive anarchism that challenges us to radically reconsider the value of hierarchy in public and private life, from schools and workplaces to retirement homes and government itself.

Beginning with what Scott calls “the law of anarchist calisthenics,” an argument for law-breaking inspired by an East German pedestrian crossing, each chapter opens with a story that captures an essential anarchist truth. In the course of telling these stories, Scott touches on a wide variety of subjects: public disorder and riots, desertion, poaching, vernacular knowledge, assembly-line production, globalization, the petty bourgeoisie, school testing, playgrounds, and the practice of historical explanation.

Far from a dogmatic manifesto, Two Cheers for Anarchism celebrates the anarchist confidence in the inventiveness and judgment of people who are free to exercise their creative and moral capacities. 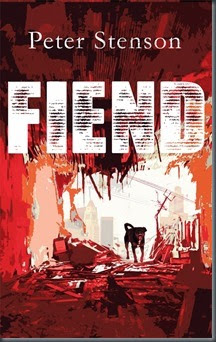 When Chase sees the little girl in umbrella socks savaging the Rottweiler, he‘s not too concerned. As someone who‘s been smoking meth every day for as long as he can remember, he‘s no stranger to such horrifying, drug-fueled hallucinations. But as he and his fellow junkies discover, the little girl is no illusion. The end of the world really has arrived. And with Chase‘s life already destroyed beyond all hope of redemption, armageddon might actually be an opportunity — a last chance to hit restart and become the person he once dreamed of being. Soon Chase is fighting to reconnect with his lost love and dreaming of becoming her hero among the ruins. But is salvation just another pipe dream?

I got this novel when it came out in hardcover (paperback edition arrived today), but when I gave it a try, I found it not what I was in the mood for. I’m glad this arrived, though, as it’s reminded me that I still need to read it! Hopefully won’t take too long to get around to.