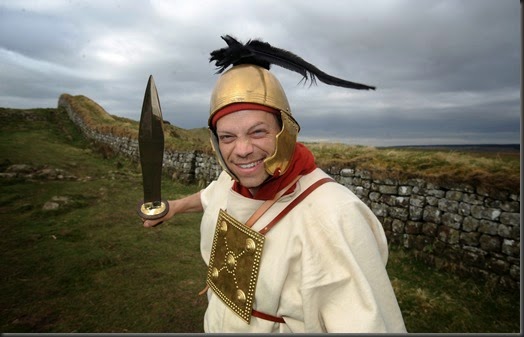 On the 27th April, I will be setting off from the Roman amphitheatre at Capua, north of Naples, on a 130 mile/208 kilometre walk to the Colosseum in Rome. I’ll be doing it not in modern hiking clothes, but in the uniform and with the kit of a Roman legionary from the time of the Second Punic War. In all, my equipment and weapons will weigh over 3.5 stone/24kgs. I won’t be alone, either. Two other authors, Anthony (Tony) Riches and Russell (Russ) Whitfield, will be with me, dressed as different types of Roman soldier.

Before you ask, we’re not insane. We all write novels set in ancient Rome, and we’re doing it for charity. We’ve also done this before, although over a shorter distance. In 2013, we walked the length of Hadrian’s Wall, raising nearly £19,000 for the charities Combat Stress and Medecins Sans Frontieres. It’s hard to know if we’ll reach the same amazing total, but there’s over £9,100 in the pot as of the 18th April.

I’ve been training for the march since November last year. I did this after seeing how hard it was to wear a mail shirt (1.5 stone/9.5kgs) on the Hadrian’s Wall walk. Russ wore it then, and it damn near killed him – despite the fact that he’d been training for a Tough Mudder event for ages. So, three times a week for the last five months, I have religiously donned the shirt and my shield (1 stone 2lbs/8kgs) as well as a sword and helmet, and headed out on the tracks and roads around where I live in Somerset. To being with, I only walked for about 5-6 miles each time, but I increased that as the walk drew nearer. During the really wet weather in January and February, I took to a rowing machine, complete with mail shirt! It was a bit hard-core, but good for fitness. 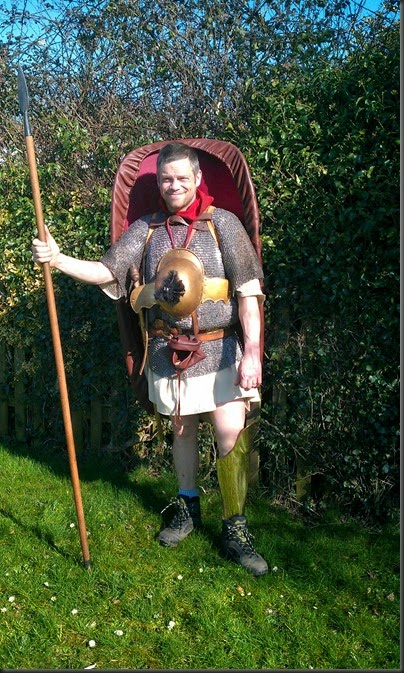 For the last few weeks, I’ve been hiking 8-12 miles three times weekly. Yesterday, I walked 15 miles. It wasn’t too bad, and I could still move this morning, so I am hopeful that the walk itself will be manageable. That said, we will have to march 19 miles every day for 6 days, leaving an ‘easy’ 12 miles for the last day. It will be no easy feat, and our feet will have to remain injury-free enough to achieve those distances. Apart from wanting to repay the generosity of everyone who’s donated by completing the walk, we will have the incentive of being on camera. We took the decision to film the entire experience for a number of reasons. With a bit of luck, we might get it onto TV. At the least, we will have a product to be used at literary festivals and other events, and something for our children to laugh at for the rest of our lives.

(A great variety of sponsorship packages are available. They start at £25, and the sponsors receive all kinds of goodies, from DVDs of the documentary to signed pictures and books, and even tickets to the film premiere in London, later this year. See the list here.) 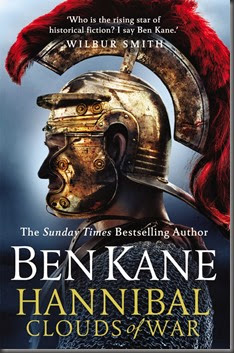 Ben Kane’s latest novel, Hannibal: Clouds of War, is out now – published in the UK by Preface. It is Kane’s third Hannibal novel, following Enemy of Rome and Fields of Blood. He has written a number of other excellent, best-selling historical novels – including the Spartacus and Forgotten Legion series. Here is the synopsis for Clouds of War:

As Rome’s war with Carthage continues, two friends – now on opposing sides – confront each other in one of the most brutal sieges of all time…

213 BC. Syracuse. Under the merciless Sicilian sun, a city is at war.

Outside the walls, a vast Roman army waits. Yet the city’s incredible defences, designed by Archimedes, mean that Syracuse will not be taken easily.

A veteran of the bitter war since its beginning, Quintus is ready to give his life in the service of the Republic. But dangers face him from within his own ranks as well as from the enemy – who include his former friend, the Carthaginian, Hanno.

Hanno has been sent by his general Hannibal to aid Syracuse in its fight against Rome. Pledged to bring death to all Romans, he is diverted from his mission by the discovery of Quintus’ sister Aurelia, a captive within the city.

Two friends on opposing sides. A woman caught between them. They are about to meet in one of the most brutal sieges of all time.

Posted by Civilian Reader at 12:19 PM