I’m a big fan of Stephanie Saulter’s Revolution series. The first novel, Gemsigns, was released in the UK last year. The wait is nearly over for US readers, though, as it will be hitting shelves in May. It also has a different cover: 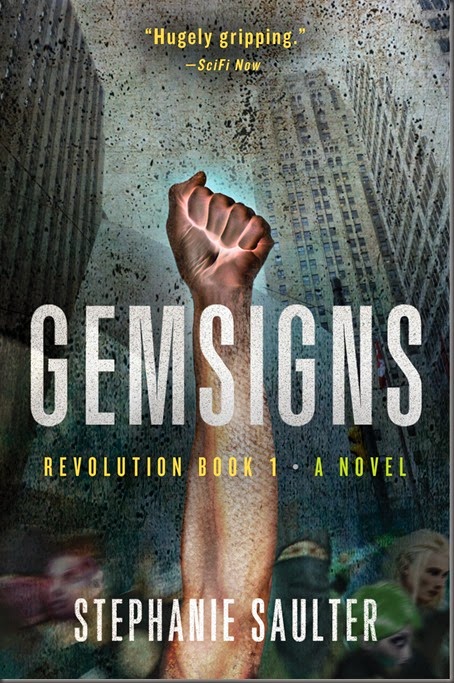 For years a deadly syndrome that targeted adolescents threatened to decimate the human race, but a cure was ultimately developed by altering the human genome. The corporations that invented the cure then began to use the process to genetically engineer an entirely new class of workers. Known as Gems, these modified humans were physically and mentally adapted for jobs that could not be undertaken by normal human beings, and branded with a gemsign: glowing, neon-coloured hair or some other visible difference, engineered into their anatomy, forever setting them apart from the Norms they were bred to serve.

Now, decades later, the Gems are fighting for their rights, and for freedom from the companies that created them. As violence begins to threaten the severely stratified society, an international conference is scheduled to decide this critical civil rights issue once and for all. In advance of the conference, Dr. Eli Walker has been commissioned to gather detailed findings on the Gems. As an apolitical, nonpartisan figure in the debate, Walker’s analysis promises to be pivotal in deciding the fate of the Gems.

But with vast corporate profits at stake, and with the bloodthirsty religious zealots of the Godgangs determined to rid the earth of these “unholy” creations, the Gems are in a fight for their very lives against violent and powerful adversaries who will stop at nothing to keep them enslaved forever.

Posted by Civilian Reader at 12:08 PM