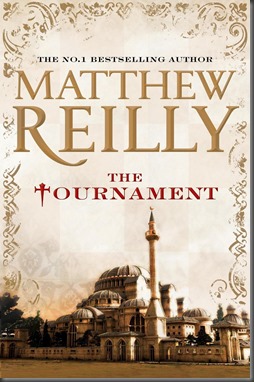 Just spotted this on Amazon UK (was trawling for interesting upcoming titles in “Customers Who Bought This Item Also Bought” ribbons…). I’m a big fan of Matthew Reilly’s action-adventure thrillers – especially the Jack West, Jr. series (Seven Ancient Wonders, Six Sacred Stones, and Five Greatest Warriors). Reilly is firmly in the same sub-genre as James Rollins and Dan Brown (leaning more towards the former than latter). With his next novel, however, he seems to be taking a different path. The novel, The Tournament, look like a historical thriller (with a bit of playing about with real events and historical figures)…

England, 1546. A young Princess Elizabeth is surrounded by uncertainty. She is not currently in line for the throne, but remains a threat to her older sister and brother.

In the midst of this fevered atmosphere comes an unprecedented invitation from the Sultan in Constantinople. He seeks to assemble the finest chess players from the whole civilised world and pit them against each other.

Roger Ascham, Elizabeth’s teacher and mentor in the art of power and politics, is determined to keep her out of harm’s way and resolves to take Elizabeth with him when he travels to the glittering Ottoman capital for the tournament.

But once there, the two find more danger than they left behind. There’s a killer on the loose and a Catholic cardinal has already been found mutilated. Ascham is asked by the Sultan to investigate the crime. But as he and Elizabeth delve deeper, they find dark secrets, horrible crimes and unheard-of depravity. Things that mark the young princess for life and define the queen she will become.

The Tournament is published by Orion in the UK in January 2014. As someone who has long been interested in the history of Constantinople/Istanbul (not to mention lived there for a few years), I am very much looking forward to reading this. The author’s website offers a slightly more sensational synopsis, just in case you need further convincing:

Suleiman the Magnificent, the powerful and feared Sultan of the Ottoman Empire, issues an invitation to every king in Europe:

YOU ARE INVITED TO SEND YOUR FINEST PLAYER TO COMPETE IN A CHESS TOURNAMENT TO DETERMINE THE CHAMPION OF THE KNOWN WORLD.

The English delegation – led by esteemed scholar Roger Ascham – journeys to the glittering city of Constantinople. Accompanying Ascham is his pupil, Bess, who is about to bear witness to events she never thought possible.

For on the first night of the tournament, a powerful guest of the Sultan is murdered, and against the backdrop of the historic event, Ascham is tasked with finding the killer.

Barbaric deaths, unimaginable depravity and diplomatic treachery unfold before Bess’ eyes, indelibly shaping her character and determining how she will perform her future roll… as Queen Elizabeth I.

EVEN A PAWN CAN BECOME A QUEEN

I really must remember to get around to reading Scarecrow and the Army of Thieves, Reilly’s previous novel. I have been very lax, recently, with my thriller reading.