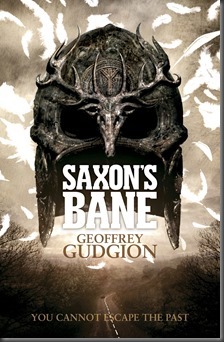 Every novelist, in every genre, builds worlds. Mine aren’t on a distant galaxy but close to home, perhaps a little too close to home. I like to ground the reader in a world that they’ll recognise, then tilt the board slightly so that as the menace emerges they think, “This could happen to me.” It seems, though, that not everyone is happy with this twisting of rules they hold dear.

In Saxon’s Bane, I started by creating an English village that could trace is foundation to a Saxon warlord, Aegl. Back then, there were deer and boar to hunt in the woods, fresh water in the stream, and the ground would be fertile. It was a place for Aegl to ground his spear and plant his generations. Allingley was founded.

“Where is Allingley?” I’m sometimes asked. Readers seem to finish the book knowing the place, and want to go there. They’re disappointed when I tell them it’s imaginary. World-building comes easier to me, you see, when I take elements that I know and blend them into something fresh. The scent of an otherness, for example, in the depths of an ancient wood. Even the old language is recognisable in the traces of Anglo-Saxon that linger in modern English. Allingley would have been Aegl-ingas-leah in Anglo-Saxon, the clearing of Aegl’s people. I can also borrow from established legend, in this case the warrior Aegl or Egil and his wife Olrun, the Swan Maiden. I brought their story to life in this sleepy village on the banks of the Swanbourne, where, nearly one and a half millennia later, the peat-preserved body of a ritually-slaughtered Saxon warrior is uncovered.

World-building from legend and folklore also allows me to weave threads of reality or literature into the plot, for example the Old Norse epic poem Hávamál, when the God Odin talks of the power of runes:

If I see a corpse hanging in a tree
I can carve and colour the runes
So that the man can walk and talk with me.

Runes are a rich source material, both as script and faith-laden symbols. I’m not a pagan, but I’ve always been fascinated by the old faiths, when people lived close to their gods, at one with nature rather than being given dominion over nature. I created a character in Saxon’s Bane, a fresh-faced, bright-eyed young pagan woman, who is part of a tradition of healers that has survived in this remote area despite the witch-finding pogroms of King James. I think by the end of the book I was a little in love with her. I researched pagan traditions and crafted a belief system around her that I called the ‘Old Way’. She is a counterbalance to an archaeologist who becomes obsessed with her project, and who doubts her sanity as she struggles to reconcile her academic discipline with her growing, preternatural understanding. Their story unfolds through the eyes of a car crash survivor, a man on his own journey to healing, who does not know whether what he saw at the edge of death was real or a product of his own traumatised mind.

So far, so good. My world-building rang true. I had a location, I had characters, I had the catalyst for a plot. I could start to bring the Dark Ages to life in present-day England, but always keeping to my principle of plausibility; a car that crashes as it swerves to avoid a stag, for example, and the discovery of a stag tattoo on the peat-preserved forehead of the Saxon warrior.

I find there’s a risk in making worlds too plausible. If you write on the principle of letting the reader think ‘that could be me’, it’s a short step to the reader thinking ‘that is me’. There’s a character in the book who finds the ‘Old Way’ too mild, and who experiments with some seriously nasty ideas of his own. As the past begins to echo in the present, he comes to believe in his own power and slides from reprobate to psychopath. All too plausible, apparently, for one practicing Wiccan. There’s an emotional rant on Goodreads from someone who is “nauseated” at the suggestion that any follower of the Horned God could be anything other than sweetness and light.

Oops. It seems I’ve blundered across someone else’s world. Perhaps I’d better start building a little further away. Gallifrey, for example. It might be safer. Meanwhile, I’ll send this off to Civilian Reader before I’m turned into a frog.

Geoff Gudgion is the author of SAXON’S BANE, published by Solaris Books. Here’s the synopsis, to whet your appetite further…

Fergus’ world changes forever the day his car crashes near the remote village of Allingley. Traumatised by his near-death experience, he stays to work at the local stables as he recovers from his injuries. He will discover a gentler pace of life, fall in love – and be targeted for human sacrifice.

Clare Harvey’s life will never be the same either. The young archaeologist’s dream find – the peat-preserved body of a Saxon warrior – is giving her nightmares. She can tell that the warrior was ritually murdered, and that the partial skeleton lying nearby is that of a young woman. and their tragic story is unfolding in her head every time she goes to sleep. Fergus discovers that his crash is linked to the excavation, and that the countryside harbours some dark secrets. as Clare’s investigation reveals the full horror of a Dark age war crime, Fergus and Clare seem destined to share the Saxon couple’s bloody fate.