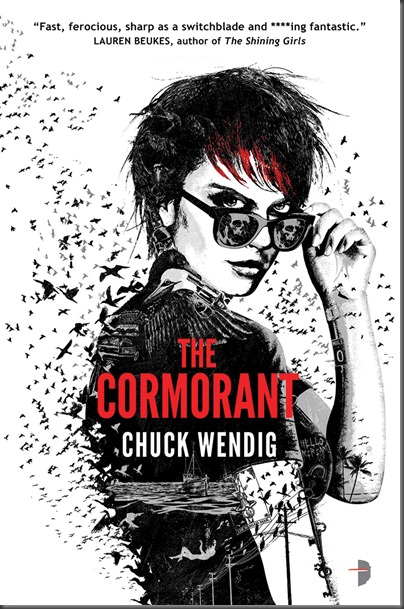 This is the third book in Chuck Wendig’s critically-acclaimed Urban Fantasy series. One I have yet to read… (Oh, how many series are there now for which I can say that?) I’ve enjoyed some of Wendig’s vampire fiction for Abaddon Books, so I have no idea why I haven’t read this series, yet… I shall have to get that fixed A.S.A.P. Anyway, I spotted the cover for this novel over on Angry Robot’s website, and had to share it. Once again, the piece has been done by the ever-excellent Joey Hi-Fi, and it’s superb. Here’s the synopsis:

Miriam is on the road again, having transitioned from “thief” to “killer”.

Hired by a wealthy businessman, she heads down to Florida to practice the one thing she’s good at, but in her vision she sees him die by another’s hand and on the wall written in blood is a message just for Miriam.

File Under: Urban Fantasy [ Plying Her Trade | Inevitable | Touch of Death | No More! ]

The Cormorant is due to be published in at the end of December 2013 (eBook and in US), and the beginning of January (UK).