Another cover from Orbit’s recent mass-cover-reveal (I’m sharing a few of them today), and another for which I can’t find much other information. I’m a big fan of N.K. Jemisin’s series – I loved The Hundred Thousand Kingdoms and The Broken Kingdoms, as well as The Killing Moon. For some reason, though, Jemisin’s series are ones I seem incapable of finishing… [This is a weird, apparently pathological problem with me.]

I’ll share more information as and when I stumble across it. In the meantime, here’s the cover (it’s rather teasing, doesn’t give too much away, but I like it nevertheless): 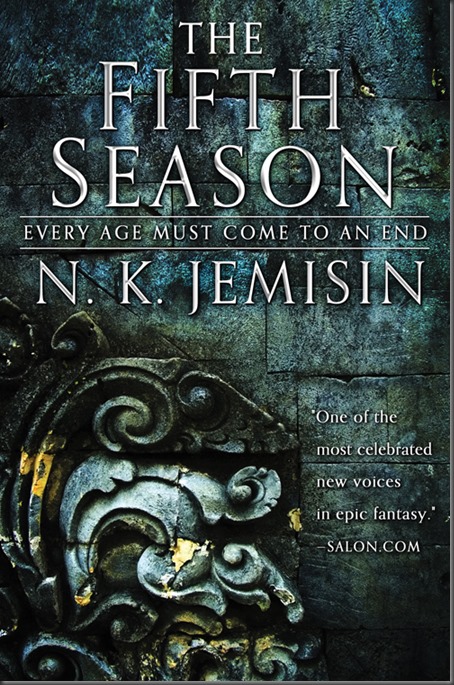 UPDATE: Spotted this on A Dribble of Ink, who got the info from The Mary Sue – some more information about the book:

“The Fifth Season is set in a world which has suffered frequent, repeated Extinction Level Events for millions of years, and all life (and magic) in this world has adapted to it. Hundreds of years might pass between these events — easy, plentiful years in which great cities rise, and people have the leisure for art and science and rapid advancement — but then, again and again, the cities fall. The world is littered with the detritus of these times of plenty, and this cover hints at them: past ages of decadence, now decaying; stone that endures beneath flaking gilt.”