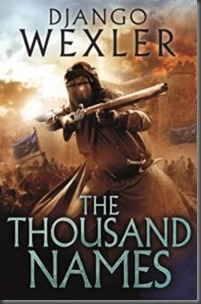 One of my most anticipated debuts of the year – flawed, but does not disappoint overall

I first heard about this novel what feels like ages ago. As is usual for me, I was impatient to read it, but then ended up taking my sweet time getting around to it. It was worth the wait, though, and I think Django Wexler is definitely an author to watch. As with many highly-anticipated novels, I struggled to review it (I finished it well over a week ago). There are lots of things I would like to discuss, but they would be spoilers. There are some nitpicks that feel overly nitpicky (easy to spot in the review). So, I’m keeping this relatively short. The Thousand Names has some minor flaws, but it is nevertheless an ambitious, well-written opening act. I can’t wait for book two, and I think most readers will feel likewise after reading this.

Perhaps unusually, I didn’t like the Prologue so much. True, I was book-restless and tired when I first started reading this, but the prologue felt like it was packed with lots of new and exotic names and terms that were presented without much context. It just felt a little odd, because according to the synopsis, the two main protagonists are called “Marcus” and “Winter”... I tend not to be bothered by this at all, but I’d be lying if it didn’t niggle me this time. Despite this rather strange, fleeting objection, the prologue also included the first instance of the very cool, creepy magic of this world…

Before I continue, it may actually be worth while talking about the magic system in Wexler’s world: it’s very low-key, and mostly absent from the novel until the final 20% or so. There are moments of magical goings-on, but the focus is far more on the Napoleonic Wars-era-style warfare in a desert land (this is, after all, “Flintlock Fantasy”). When the magic kicks off, much later in the novel, it’s classical in type (I’m not going into detail, it may spoil things), and enhances the story and world excellently. It is by no means a crutch, and its relative lack of prominence in this novel was welcome (I get the feeling it may be more central in book two).

After the prologue, we get a superb chunk of fantasy fiction. Wexler introduces us to the two protagonists – the only two points of view of note (the novel is pretty much split 50-50 between them). We get to know a handful of the Khandar Colonials (the foreign legion-esque regiment), which has just been reinforced. Wexler writes really great characterisation. The scenes with the rankers killing time on the walls was brilliant – they felt completely real (despite being douchebags). The Thousand Names made me think of Bernard Cornwell’s Sharpe series, but set in a fantasy/secondary world and quite a bit longer. There was also a dash of Terry Pratchett’s Guards series and gentle humour. The more I read, the more this impression was reinforced. It’s a good thing, certainly, as I loved the Sharpe series and Pratchett is awesome.

Sadly, the humour and banter withdrew relatively quickly, which weakened the Pratchett point of reference, and also took away something I really liked from the early chapters. Part of this, I’m sure, was to highlight the fact that Buck, Peg, et al (the colonials at the start), are actually quite awful characters – after Winter is promoted to Sergeant and transferred to a newly-arrived regiment, we see them through her eyes, and learn of the bullying they inflicted upon her. The reduction in gentle humour also coincided with a dip in momentum, and Wexler had an unfortunate tendency to dwell on minutiae, especially military minutiae, as well as a couple of instances of repetition (on the impact of canister shot, for example, a couple of pages apart). If nothing else, Wexler has done a great job of researching what warfare was like in our real-world equivalent time, and the added authenticity this provides does elevate parts of the novel well above his peers’.

Winter was, for me, the most interesting character in the book. I liked learning a bit about her past, and her constant quest to hide her gender was interesting (although, her sudden promotion and attendant privileges did rob some of the tension from this side of her life). Her interactions with her new regiment are also very good, and I took to her comrades very quickly (especially her over-eager corporal, Bobby Forester). Marcus wasn’t as deep, sadly, which made his chapters a little less compelling as time went on. He’s a good guide to the upper military echelons, but he doesn’t offer the reader as much as Winter’s experiences. He’s rather straight-laced, and just a little bland. You do get a good sense of his loyalty – to his friends and fellow officers, courage, and the respect his men feel for him. I wonder if perhaps a non-military POV (in addition, rather than instead) would have added considerable value, not to mention variety to the story?

Things start to pick up a little after the halfway-mark, as The Thousand Names of the title are introduced, and the campaign properly gets going. It’s easy to see why some people thought it was too slow to get going. But for me, it was mostly ‘slow’ in the right way. It gives us time to get to know the characters a bit better. At the same time, though, when battle is joined things slow down a good deal. I admit, it became a bit frustrating, and the (over-)long descriptions of battles and skirmishes started to drag. (I am not a fan of battle-scenes, though, and have always preferred the pre- and post-battle sides to my fantasy and science fiction.) Hopefully, given the usual greater time pressure to write book two, Wexler will be able to write/offer a more focused, tighter novel the second time around. Also, without the need to set the scene, the novel should kick off quicker.

Ultimately, I liked this, despite some frustration with the pacing. Wexler has set himself a very high standard to maintain with the first 20% of the novel, one that was not maintained throughout. It picked up again nicely for the final 30%, though, with a flurry of activity, adventure, revelations, and even a dash of sword ‘n’ (low-)sorcery-esque battle underground. I’m certainly looking forward to book two.